Growing old is not for wimps. It’s brutal, physically and emotionally, and no one can tell you how it’s all going to play out. And yet, if we’re lucky, most of us will do it. In our continually youth-oriented culture, there are few models to show us how to do it well, but as the baby boomers age, that may change.

Minneapolis writer Miriam Karmel has a new novel, “Being Esther,” one of only a very few out there that centers on a character in her mid-80s. In telling Esther’s story, Karmel creates a nuanced, compelling, humorous and heartbreaking portrait of aging. As Esther carries on her routines, she encounters all the issues that affect seniors as they enter old age, strangely redesigned for the modern era.

But Karmel didn’t set out to write a novel about aging; she just wanted to write about Esther.

MinnPost: Where did this character come from?

Miriam Karmel: She isn’t any particular person in my life. The idea of the story came from something I heard years ago. When was in college, I befriended an older widow — I call her my adopted grandmother — and every morning, she and a friend would exchange phone calls to make sure they were still alive. That really stuck with me, and years later, I wrote a story called “Bingoville” and that ended up in the story, which ended up in the book. It built from there.

MP: So you didn’t set out to write a novel?

MK: No! I backed into writing a novel. I really write short stories. This is being called my “debut novel” but that amuses me, because I’m no ingénue. [Karmel, a journalist by day, has published numerous short stories in literary journals, and has won prizes including Minnesota Monthly’s Tamarack Award.] For a while I toyed with the idea of writing one of those linked collections of stories, but I just wanted to keep writing about Esther.

MP: When you mention linked stories, I think about [Elizabeth Strout’s] “Olive Kitteridge,” which also centers on a older woman. What other literary portraits of aging did you encounter? There aren’t very many.

MK: You’re right. I absolutely adored “Olive Kitteredge” — but that wasn’t really a portrait of aging, that was about a woman throughout her life. May Sarton’s journals stand out to me. She wrote a journal of her 80th year, another called “After the Stroke.” She’s the most prolific writer about being old. Willa Cather has also written about being an older woman. Evan Connell’s “Mrs. Bridge” is another. 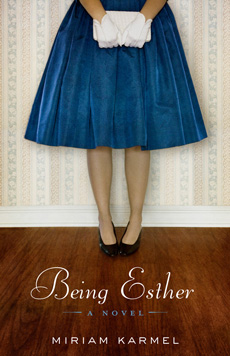 MP: You aren’t anywhere near 80. What kind of research did you do to understand what aging is like? Did you visit a lot of assisted living places?

MK: A lot of it is just listening to older people talk about what it’s like to be old. But I visited a lot of those places, too. I went with my father when we were looking for a place for him to live. That was very difficult. And I have a lot of friends going through this with their parents.

MP: Esther’s daughter is pressuring her to move into an assisted living facility, and she’s resisting pretty vociferously, because she knows those places are not like they make it out “in the brochure.” What did you discover when you toured them?

MK: My father had dementia, and was living in a big rambling home … and he couldn’t go anywhere without getting in the car. So I had to convince him we should look at some places. But when we did, I was just horrified. It kind of reminded me of a college dormitory. I found it frightening. I couldn’t see him making that transition.

MP: But they are necessary for some people, which you make clear when Esther visits with friends who can’t care for themselves.

MK: Yes. The reality is, there is that void, that inability for the person who is in that altered state to really function the way they once did. I once took my father to the supermarket, and he couldn’t tell me what he wanted. He was a lawyer who argued cases before the Supreme Court, and it became clear he wanted to buy stamps, but he couldn’t even explain the concept of money. It’s almost like you can become locked inside your body. In the book, Esther calls it being lost from the inside out.

MP: You do a good job of exploring how frightening that prospect is for Esther.

MK: People don’t talk about the aging process, and how appalling it can be. So we don’t know what it’s like to get really old, until we get really old. We keep living longer and longer, but we don’t necessarily live better.

MP: But in a lot of ways, this isn’t really a sad book. Esther is pretty funny, and she still gets into scrapes, like the scene where she encounters a jerk at the grocery store. She gets out there, she interacts.

MK: Yes, she remains true to herself, and she has a full life. She still has friends, she still gets out, she reads and keeps up with the world, and she’s full of life. It’s just a diminished life.

MP: And she holds her own against a pretty unsympathetic daughter.

MK: I think she knows what’s best for Esther. The way she brings her groceries, although Esther says she can do that herself. But then she brings her bran cereal, when Esther really wants sugary cereal. People don’t take older people seriously. I think we tend to infantilize them. But she wasn’t dumb. She was just old.

MP: I feel like we are discussing a real person.

MK: She’s becoming more real to me all the time. I’ve learned so much from her. I almost bought a blue dress for my reading the other day, like the one Esther has, been then I thought, ‘Oh no, I’m becoming Esther.’

MP: What did you learn from her?

MK: Our mothers were right: You should treat your elders with respect.