Northern Minnesota is an irresistible setting for writers. Adventure tales true and imagined take place on the jagged waves of Lake Superior. The old mansions of Duluth are ideal for housing family dramas. And countless mysteries have been set in the shady forests of the Arrowhead region. But for Sarah Stonich, setting her stories up north makes sense on a much more personal level; her grandparents settled there, and for decades her family’s own stories were intertwined with the region. She knows the character of the land and the people who live there. Today she keeps a cabin on an inland acreage, and she does some writing here — some.

“I initially built my cabin with the idea it would become a writing studio, but the facts of no water and marginal solar power make for more maintenance and housekeeping than free time,” she said in an interview. “My main cabin is smaller than Thoreau’s and about as well-appointed. If you assume that man spent most of his time musing and cloud-gazing and writing, reconsider.”

In her latest book, “Vacationland” (University of Minnesota Press), a complex array of characters across time and place share one thing in common: time spent at Camp Naledi, a modest cabin resort that Stonich says is not based on any one real place.

“Most resorts have improved themselves with amenities to a sterile kind of sameness and ‘new rustic,’ ” she said. “The resort in my imagination bears no physical resemblance to any real place, just all the mom and pop resorts of memory. That said, Naledi smells a little like Camp Van Vac.”

Stonich’s novel (her fourth book; she has two other novels, “The Ice Chorus” and “These Granite Islands,” and a memoir, “Shelter”) reads like a string of short stories, with some characters jumping from one to the next. In one story, a dog brings a severed human hand home to his owners. In another, two different churches (one Finnish, one Swedish) combine forces to sponsor an immigrant fleeing the violence in Sarajevo. He studies English by watching daytime TV, which gives him a warped sense of his new country that his new neighbors can’t quite dispel. We meet the father of an orphaned girl raised by her grandfather at the resort only in the last eight minutes of his life. That girl returns decades later in another chapter. And a spirited old lady takes a crowbar to her appealingly rustic kitchen when she learns her daughter plans to build a megac-abin around that one room, and destroy a stand of virgin pines behind it. 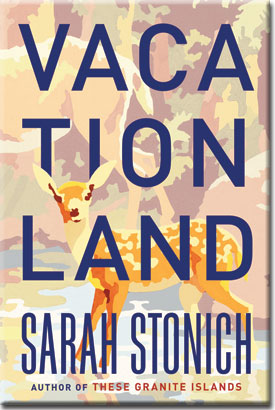 Tensions between old-timers and new play out in many of these stories, and that’s a familiar theme to lifelong Northland residents who have seen their land and way of life changed for the benefit of visitors from the city — or 612ers, as Stonich says. This battle is playing out in her own backyard.

“A small group is reviving a push for ‘a bridge to nowhere’ project near our land that has huge fiscal and environmental ramifications for state agencies. So, yes, my life is affected, but frustration doesn’t inspire much fiction,” she said. “There’s plenty written by and about visitors in the northwoods or BWCA — we hear their poetry describing northern lights and see photos of canoes in the mist, but little is written of the people and communities that line the roads leading to such places.”

Although it’s a work of fiction, Stonich’s “Vacationland” contains so many different lives that it goes a long way in correcting that, with characters that are admirable and pathetic, strong and moving. There and locals and there are visitors, and their stories become so intermingled that in the end, the northland belongs to all of them, and they all belong here.

Sarah Stonich looks below the surface of Minnesota’s ‘Vacationland’