The latest installment in John Sandford’s Virgil Flowers thriller series comes out this week, and it just might be the last one. You never know. The Twin Cities’ mystery community is still mourning the premature loss of Vince Flynn, and last week we learned that Tom Clancy died, just weeks before his new book comes out. You get attached to a character. If the writer is fast and prolific you check in with him every year or so, but one day, the story has to end.

“I am just in shock about Tom Clancy. He’s only three years younger than I am, and we have the same publisher, so it feels like a real wake-up call,” said Sandford in an interview.

That’s not to say Sandford’s planning to check out anytime soon. In fact, he’s getting married in a couple of weeks, plans to do a little hunting in Minnesota this fall, and is settling into his new hometown of Santa Fe, N.M.

“I still consider myself a Minnesota writer, though, I’m up there nearly every month, and all my characters are still there,” he says. But since he’s already published 38 books, if time is limited, well, there are other things he’d like to get to.

Sandford — whose real name is John Roswell Camp — is a skilled painter and would like to spend some time doing nothing but art, which has been a central interest of his since he was a teenager. He began his career as a U.S. Army journalist, and worked as a reporter and columnist for the Pioneer Press, where he won a Pulitzer Prize, until 1990. He’s written for various news sources since then, and if an intriguing story came his way, he’d probably follow it. (In 2007, he spent a couple of weeks embedded with the National Guard in Iraq, and wrote about it for MinnPost.) He also has a long-running fascination with archaeology and is a participant and financial backer of a major archeological project in Israel.

“The digging has now stopped, and we’re in the phase where everything needs to be documented and published. If you don’t do that, then you’ve only destroyed an archeological site for nothing,” he says.

One thing he’s already gotten from the site is a deep knowledge about antiquities and the geopolitical forces and criminal elements that sometimes get involved in that world — in other words, all the ingredients for a good book.

In “Storm Front” (Putnam) Virgil Flowers, the laid-back BCA investigator who got his start as a supporting character in Sandford’s “Prey” series, finds himself on the trail of a mysterious artifact that was ferried from an Israeli dig site to southern Minnesota in the backpack of a dying man. Soon after, an attractive, lying Israeli detective shows up, and Flowers begins to understand that this theft is a much bigger deal than he first thought — the artifact is a stele, a stone inscribed with information that could rewrite the Bible. Suddenly, Flowers is at the center of a situation involving “Israeli crazies, American crazies, Palestinian crazies, Syrian crazies, Egyptian crazies … maybe the pope.” Like any good Minnesota cop, of course, he’d rather be fishing.

“I’d rather be fishing, but I haven’t the time. So I let Virgil go out every now and then,” says Sandford, who admits that both Flowers and Lucas Davenport, the hero of the Prey series, are based a bit on himself.

‘He’s better looking than I am’

“Davenport shares a lot more of my characteristics, since I started with him. It’s just easier to remember that way. He’s better looking than I am, though, and taller. But he has blue eyes, and he’s a lapsed Catholic, like I am, although I don’t know that I’m even that anymore.” (The 23rd Davenport book, “Silken Prey,” came out this spring.) 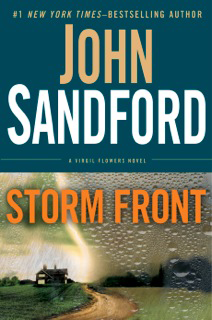 As for the secondary characters in his novels, Sandford bases them on real people he happens to see out in the world. “I’ll watch somebody. I’ll see someone interesting and get a feel for their mannerisms, personality, or just their looks, and they’ll fit into the story somehow,” he says. The same goes for the settings. “I spend a lot of time wandering around the countryside, just looking at people, seeing how everything fits together. I actually have to report it, to make it feel real, even though the story is fiction.”

Obviously, having a background in journalism is useful for that kind of research, and Sandford notes that many of his contemporaries in the thriller-writing world started out at newspapers too.

“A lot of journalists are talented enough to write a mystery novel, and I would say that most of the top-end mystery writers actually started out as reporters. But there is more to it than just the writing; there’s a learning process, and most journalists aren’t willing to do it. They’ll write a chapter, then it gets tedious, then they stop. They don’t take the time to learn the form. The stories aren’t radically different. You have to have a bad guy — and most of us base our bad guys on people who could live next door, so that part isn’t even that hard. But there’s definitely an art to putting it all together in the right way.”

‘You need a little experience under your belt’

Sandford didn’t start writing mysteries in earnest until his youngest child was off to college, by which time he already had a store of ideas. “I’ve seen a few young people start right off, usually with coming of age sort of thing. We old people sometimes think those stories are naïve. Most of the time, you need a little experience under your belt. Thriller writers especially do, because it involves some understanding of the complexity of human nature.”

As a reporter, first with the U.S. Army, then in newspapers, Sandford saw a fair amount of human complexity in action. Living in the Twin Cities fed his imagination as well.

“The Twin Cities is an interesting place for innovative murders,” he says. “I lived there for 30 years, and once or twice a year you’d see a really interesting murder. There’s something in the soil that attracts that kind of thing there.”

No doubt, he’ll find the same thing true in New Mexico. And no doubt, despite his best intentions, Sandford will start thinking about the next story. “To be honest, I would like to stop writing,” he says. “But I don’t know if I can stop. I suppose I probably can’t.”