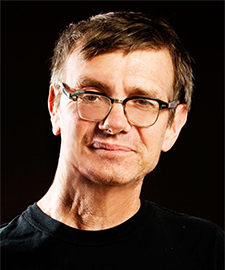 “Anyone in the arts knows it’s famine or famine,” says Kevin Kling, who, as a professional storyteller, doesn’t even fall into one of the usual arts career categories. But operating outside of the boundaries has turned out just swell for him. He’s writing a play for the Children’s Theatre, performing at the Guthrie and the Fitzgerald this winter, and planning a month-long tour of Thailand with Interact Theater in January and a storytelling trip to Greece in May.

“I can’t wait, between Dionysus and Epicurus, I should be fine,” he says. “The Greeks have played a large role in my development as an artist and person. The archetypal themes of the gods and heroes, the journeys, battles, loves, losses, it’s all there.”

Kling also has two new books out, including a career retrospective on a career that he says is not even half over. “It’s quite humbling and a challenge to make the last three quarters of my life as meaningful,” he says.

The partly autobiographical “Big Little Mother,” out on Minnesota Historical Society Press (MHS), is the companion to “Big Little Brother,” Kling’s first children’s book. In that one, the big brother is quickly surpassed in size by the little brother in a funny, sweet story illustrated by Duluth comic artist (“Violet Days”) Chris Monroe. Kling has a bona fide big little brother in his family; he also has a bossy big sister, so the new book pays tribute to her and bossy sisters everywhere. Monroe drew this one too, and her goofy, lavishly detailed visions nicely complement Kling’s storytelling.

“Now that we know each other, I can write a page without overwriting, knowing Chris will find the life — a look in the eye, a smile, she’s the master of eyes betraying the soul,” says Kling. “I thank the lucky stars MHS put us together; her subversion subverts my subversion.” 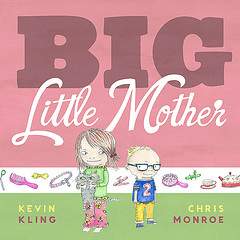 This week, Kling will be celebrating Thanksgiving with his mother, brother and sister, “and all the big little nieces and nephews … future topics for sure,” he says. So we may expect a third picture book. “Yes, it will be the one before the fourth.”

A retrospective look at career

For adults, MHS has just released the first retrospective look at Kling’s career, “On Stage With Kevin Kling.” He says he’s honored, although of course, he’s not done yet. The collection includes the full scripts of his plays, “21A,” “The Ice Fishing Play,” and “Scarecrow on Fire,” as well as remarkable photos from shows dating back to the 1970s.

If you never had the chance to see “21A” on stage, you can now read the script and see why people were so taken with this story about riding one of the Twin Cities’ strangest bus routes. (Kling played all the parts.) The play may still be on stage somewhere; Kling says 21A has been running in the Czech Republic since 1987. Although his work hinges on all the Minnesota landmarks, jokes, and stereotypes (heck, he may have started some of them), his storytelling plays well all over the world.

“I guess the ice fishing play was a huge hit in Siberia, not kidding,” he says. “I was telling ice fishing stories in the outback of Australia and they were laughing like a bunch of Minnesotans. These were folks that had never seen temperatures below 50 degrees. I asked them later how they got all the references and I was told, ‘Our weather can kill us too, mate, only from the other end of the thermometer.’” 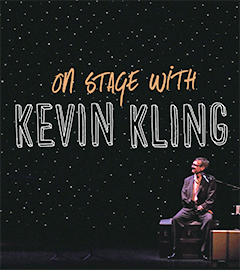 Kling says he’s rejoicing the return of winter, true blue Minnesotan that he is, and hopes to spend some time in an icehouse this winter.

“I try and get north a couple times for those days when the nostrils slam shut,” he says. How a man with minimal use of his arms can reel in a lunker shall remain a mystery. (He says he is — barring technology breakthroughs — as repaired as he’s going to be, following a devastating motorcycle accident a dozen years ago. “There’s a point where you can keep trying to regain who you were or live who you are.”) But, as the ice fishing play explains, ice fishing isn’t really about fishing, much.

Funny, with many sobering moments

It is a funny, funny, and surprisingly sad play. And there are many other sobering moments in this collection. Although Kling is often thought of as a one-man show, he’s collaborated with many of people who make the Twin Cities a great place to catch a show. A poem for Ethan Johnson of the Brass Messengers, who died in a car crash, is here; many photos by Ann Marsden, who passed away last summer, grace the pages; we see Kling performing with musician Steve Kramer, also gone too soon.

But Kling says he is looking forward to working with other heroes; Dan Chouinard, Simone Perrin, Prudence Johnson, Claudia Schmidt and Dane Stauffer are just a few of the folks who inspire him on stage. Or maybe it’s the other way around.