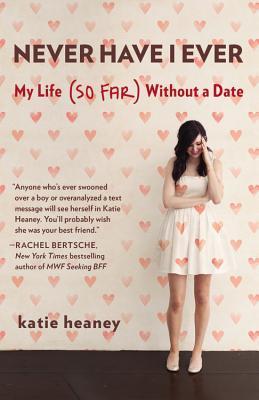 Love and romance — yuck. This supposedly fun thing is so fraught with confusion, discomfort, terror and poor odds that you’d think society would have figured out a better way by now. Nope! Katie Heaney’s entertaining new memoir makes it clear that single people today may have texts, sexts, apps and compatibility algorithms working on their behalf, but when it comes down to the basics of dating and relating, they are just as lost in the forest as their forebears.

In “Never Have I Ever: My Life So Far Without a Date,” (Grand Central Publishing) Heaney takes an observer’s look at dating rituals. She’d actually like to be a participant, but somehow, she reaches age 25 without ever having gone on a real date, even though she appears to be a pretty normal, cute, fun and intelligent young woman, with a large group of loyal friends. But somehow, the guys she likes have girlfriends or there’s no chemistry, and she’s smart enough to avoid the creeps, and as it turns out, you can learn quite a bit about romance by taking note of the experiences of others. As her friends suffer through a series of creeps, jerks, cheaters and potheads, she reaches the conclusion that it’s OK to be single — for now.

Heaney, who was raised in St. Paul and Shoreview, recently moved to New York to work as a writer and editor at BuzzFeed.

MinnPost: Your memoir covers your background as a dater, but not as a writer. What led you to a career in words?

Katie Heaney: No, I never thought I’d be a professional writer. In college I studied political science, and I went to grad school for public policy. I thought maybe I’d be a politician, or an activist of some kind. I was always writing little stories when I was a kid, and I journaled some. But I think the majority of my interest in writing comes from sharing notes with my friends in school, and writing emails back and forth, and kind of becoming obsessed with the ways we all talked to each other. We all thought each other were the funniest people we knew. That’s kind of where “Reading Between The Texts” [a series Heaney wrote for The Hairpin in which she tries to interpret the actual meaning of mostly inscrutable text messages] comes from, and I think the rest of my writing is shaped by that part of my life too.

MP: May I ask what writers you enjoy, or consider influences?

KH: I obviously love Edith Zimmerman. I owe a lot of my career to her, truly. If I hadn’t found The Hairpin and her writing on it, I don’t know if or when I would have tried to get anything published. She’s singularly eccentric and funny in a way I just have not seen anywhere else. I also really love Rebecca Harrington, both her book “Penelope” and the celebrity diet columns she does for New York magazine. She’s so dry. I think Chiara Atik is brilliant, especially in playwriting. My favorite author is probably Kurt Vonnegut. And Margaret Atwood.

MP: Your diary comes up a few times in the memoir. Do you still keep one?

KH: I mean I have one, and I maybe wrote in it last a month or two ago, but I wouldn’t say I keep it up in any meaningful way. There are just weird rare moods I get in where I feel like I have to write something on paper. I’m glad to have the old ones for records, even if they’re sparse. I don’t throw them away because I am both very sappy and a little paranoid. What if the garbage collector reads my secrets? So embarrassing.

MP: How important is BuzzFeed and its competitors to people of your generation? Do these sites replace traditional news sites or magazines, or real-world interactions?

KH: I think BuzzFeed is very important to people of my generation. I don’t know anyone my age who doesn’t know the site, though I’m sure they’re out there. I think it likely does replace other, older sites and magazines as the go-to source for news and entertainment. It’s not for everyone, and I know many, if not most, people, including me, are going to be checking a number of sites when they want to know what’s going on in the world. As far as replacing some real world interactions, I wouldn’t blame BuzzFeed for that any more than I would the rest of the Internet. But I also think there tends to be too much hand-wringing about that kind of thing.

MP: I have to ask: Since your book went to press, have you gone on a date or been in a relationship?

KH: I’ve dated a few people casually. It’s too weird for me to think of that as being record-breaking or not. My dating history isn’t a part of what goes into my decision to date someone or not. I’m not in a race with anyone, including myself.

MP: There is a certain idea, maybe perpetuated by people like Lena Dunham, that young people don’t date anymore — they just go straight to hookups with few attachments. How baloney is this?

KH: I don’t think it’s that baloney? I mean, I know a lot of people in both camps, and many in various nebulous stages in between. Everyone I know seems confused, but whether that’s any different from how it was 50 years ago, I have no idea. I do think a lot of people have a pretty cavalier attitude toward dating, and take less responsibility toward others than they should. But I am also a manners tyrant, and I think almost everyone has shitty manners, regardless of whether they’re dating or not.

MP: When you try online dating, you get some pretty horrifying responses. Don’t you feel like guys should “get it” by now, for instance, that emailing strangers a combination of insults and demands for sex isn’t a successful technique? Our culture has a lot of information about what it’s like to be on either side of the dating equation, so why aren’t people just better at it by now?

KH: I think a lot of guys aren’t listening, and then a lot of the ones that are listening don’t care. There’s a sizable portion of the male online dating population that’s convinced that what we all want is a jerk. They don’t empathize with the female experience. And actually, I think, that type of message is fine and instructive in a way. I don’t want that type of guy learning the “right” way to send a message. I would rather see someone’s misogyny laid bare right away, to be deleted upon receipt.

MP: I can’t help but wonder, are the pickings that slim? Are there many good ones out there in your age group, or is something up with guys today?

KH: Of course the pickings are slim. If we are, in theory, looking for people we could spend months and years with, much less decades, how many compelling ones could there really be? Like four? It’s not about there not being enough “good” ones, it’s about the fact that finding the potential of long-term compatibility with someone (not just in love but with friends, colleagues, everyone) is really … hard. I make fun of the guys my friends dated, and the guys I liked, and vice versa, but everyone is just doing their best and going after who they like, and usually it doesn’t work out. Because finding worthwhile love is not easy.