Shane Bauer should have listened to his girlfriend. They were out for a hike with their friend, Joshua Fattal, when Sarah Shourd suggested they turn back. She had a bad feeling, plus the three were almost out of water, but the guys wanted to keep going — just a little bit farther, a little bit more.

And then they saw a soldier with a gun. The young Americans were on vacation together — hiking in the hills over Iraqi Kurdistan, 100 miles or so from Iran, they thought. But when the soldier beckoned them over to him, the trio unwittingly crossed the border into Iran, and were captured and imprisoned as spies. Bauer and Fattal wouldn’t walk free again for two years.

“A Sliver of Light: Three Americans Imprisoned in Iran” (Houghton Mifflin Harcourt) details the intense psychological experience of being unjustly imprisoned in a country that has a complicated and adversarial relationship with the United States. While the prisoners struggle to adapt to life in a cage (Shourd, as the only female, is placed in solitary confinement), their families work frantically to secure their freedom, despite receiving little help from the U.S. government.

The American hikers — journalist Bauer; Shourd, who had been working with refugees in Syria; and educator Fattal — become pawns in an international game that moves achingly slowly, yet with the potential for disaster one wrong step away. Some other prisoners at Evin Prison are tortured or killed. Meanwhile, the Americans are “high value” prisoners, and enjoy a unique standing among guards and certain privileges, even as they are denied trial and contact with the outside. This memoir, told in turn by the three voices, tells of their lives in prison and the process by which they eventually returned to freedom.

They describe wonderful middle Eastern food, as well as taxing hunger strikes they periodically undertook in order to be given their mail. Stroud shares the way solitary confinement reshapes the mind, as well the ingenious ways prisoners secretly communicate with each other and bond. Shourd is released first, and suddenly the prisoners get a full understanding of the heroics their families and friends undertake to secure their release in a hostile political landscape.

Shane Bauer grew up in Minnesota in the Mille Lacs area before moving to California for high school and college. His family lives in Minnesota.

MinnPost: You’ve contributed a unique book to the genre of prison memoirs. How much did other memoirs about prison influence your writing?

Shane Bauer: I actually read quite a few while in prison. People sent them to us and it was very helpful, to see how other people had survived similar experiences. Nelson Mandela’s “Long Walk to Freedom,” was particularly important to me. But when it came time to write ours, I intentionally avoided other people’s memoirs. I wanted to keep my account raw and as close to my own experience as possible.

SB: We first sat down and decided who would write what, then went apart to go into our own memories of that time, each writing alone. After the writing was done, we’d edit each other’s work and check each other’s memory of certain events. We quickly learned that memory is a strange thing — two people experience and remember the same event very differently sometimes.

MP: Especially in confusing situations, and when PTSD becomes part of the equation, I imagine. Did your residual trauma impact your ability to revisit those memories?

SB: Yeah. At times, especially when we first started writing, I just wanted to quit. I didn’t want to return to that place. Especially the parts where we talk about the way the imprisonment affected our relationship with each other. (The three remain friends, and Bauer and Shourd married in the U.S. a year after the ordeal.) When I was deep in the moment of writing, that was very tough, and I realized I still held such deep tension in me; it was so hard. But when it was done, I realized I felt lighter. Those stories no longer hold that weight for me. None of it is very hard for me to talk about anymore.

MP: Your experience was portrayed by the U.S. media as unique and awful, yet you point out in conclusion — and in your ongoing work as a journalist — that thousands of people around the world are currently living a version of that experience — many of them imprisoned by the U.S. government in conditions as bad or worse than what you experienced.

SB: Yes. There are thousands of political prisoners around the world who are indefinitely detained. There are thousands of people in solitary confinement, many in our own country, despite all that we now about how this impacts people psychologically. The U.S. has more people in prison than any other country in the world. It is a huge industry here, and it’s defining our time. For all the lip service Americans give to the notion of “freedom,” we also contradict that by imprisoning vast numbers of people. There are people like Chelsea Manning, who took a risk to expose what she saw as injustice by the military, and paid for that with her own freedom. There are many Muslims who have been entrapped by the U.S. government and detained without cause, just as we were. Obviously, Guantamamo is one example of a place like Evin. Some people there have been held without trial, for 10 years. Others have been pardoned and approved for release, and yet not released. They are caught up in something much larger then themselves; but two wrongs don’t make a right. 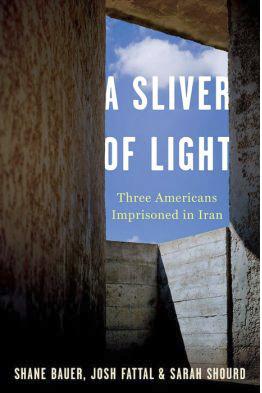 MP: Your family sought help from the Obama administration to secure your freedom, and it’s clear that this was a frustrating and ultimately largely unhelpful avenue. Have you had any contact — or an apology — since your return?

SB. No apology. We were frustrated that they weren’t doing more to get us out, and we remain frustrated by the larger policies the U.S. has in the Middle East region. Iran was responsible for our detention, but the U.S. played a role in creating the political environment that made that aggression possible. The problem with U.S. actions is that they have severe repercussions, mostly on the civilian population. If you overthrow a foreign government or place sanctions on them in order to get them to bend to your demands, those acts mainly hurt the general population, civilians. That approach will ultimately lead to retaliation, which is what our detention was largely about. And it goes both ways — we have Middle Eastern friends who have been arrested by U.S. troops without cause.

MP: How do you feel about President Obama’s diplomatic efforts to reach out to Iranian President [Hassan] Rouhani this month?

SB: I think it’s a really good first step. I know there are many parties on both sides who are intent on sabotaging those talks, but we have to make an effort if things are ever going to improve. To me, the biggest tragedy about the current state of relations is that the civilians are suffering so much under sanctions. The price of food has skyrocketed, leading to starvation, even as the value of the currency has plummeted. This escalates tensions and doesn’t bring about any positive movement, just suffering on the part of innocent people. It’s just a game, just as it was with us. We were stuck between two countries that couldn’t make a move, because they thought the other would perceive them as weak. Someone told us if Obama would just have written a letter to [then president of Iran] Ahmadinejad, that would be enough to get us released. But that was a non-starter. We had an inside look at just how badly foreign policy works in the Middle East.

SB: I wanted to tell my story without an agenda. But I do hope something can be learned from it. I’d like to see conditions change for prisoners, at the very least. I’ve written about solitary confinement for Mother Jones, and since then, I know of at least 30 people who have been moved out of solitary, some who’d been in for 10 years. I’m writing about the bail bond industry, and how they lobby to prolong pre-trial detention. That’s getting into the very large, complicated industry that is imprisonment in the U.S. There’s plenty of room for change and improvement there.

MP: Do you think you’ll be able to go back to the Middle East?

SB: Yes. Sarah and I hope to go back fairly soon. We have plans to visit friends. We love it there, despite what we went through. We saw such a beautiful side of people, even in prison. So many really brave people reached out to us. It is an amazingly beautiful, culturally rich place, with so many wonderful examples of humanity, even under difficult conditions. It is part of the world that I love. I wish I could visit Iran outside of prison, but right now, that can’t happen. Maybe someday things will be different.