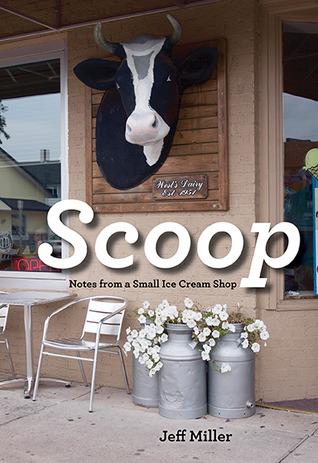 During his commute to his attorney job in London, Jeff Miller read a fair number of books about travel, adventure and reinvention.

“I enjoyed anything by Bill Bryson, Peter Mayle’s ‘A Year in Provence,’ ‘Under the Tuscan Sun,’” he said in an interview. “Those sorts of travel memoirs passed the time on the Tube and made for a very pleasant start to the day.”

At that point in his life — a decade ago — he never would have fathomed that he’d become the author of such a book himself. But, then, he hadn’t been planning to radically change his life. It just sort of happened. Miller and his partner, Dean, were visiting northern Wisconsin on vacation, and they learned that West’s Hayward Dairy, a somewhat decrepit but much-loved ice cream shop in Hayward, was for sale.

It’s natural, when on vacation, to fantasize a little — wouldn’t it be fun to live in this beautiful place? But Miller and Dean took that daydream to the next level. They sold their London apartment and with the proceeds bought West’s Dairy, for Miller to run, and McCormick House, an 1887 Victorian mansion for Dean to transform into a four-star bed and breakfast. Miller grew up in the Twin Cities, while Dean was a native Brit, but the change of pace was dramatic for both of them.

“It’s all a matter of perspective. Our friends in London thought it quite exotic, and to them, the wilderness of Northern Wisconsin is exotic. They might go to Provence all the time, so that’s sort of ordinary,” he said. “But the vast distances, the woods and water and long quiet winters, those things are hard for someone in London to even imagine.”

It might be a stretch to say that Hayward is to Twin Citizens what Provence is to Brits, but then again, maybe it isn’t. In “Scoop: Notes From a Small Ice Cream Shop” (Minnesota Historical Society Press), Miller describes the culture shock the couple experienced as they left London for the Midwest to embark on a somewhat rocky road as new owners of an outdated business. But we also see how, over the course of a year, he becomes one of the townies, a regular among a small, quirky band of shopkeepers, old-timers, and locals whose livelihood depends on a seasonal influx of visitors, most of whom hail from the Twin Cities.

“I realized one day that my story was interesting. I often told little anecdotes and vignettes to my friends in London and my B&B guests about the characters here and the things that go on in town, and I started writing them down,” he said. Miller bought a stack of how-to-write guides and studied up, but the work came fairly naturally to the former attorney. “I think a lot of lawyers are frustrated writers who go into law because they are afraid of failure and poverty.”

The result is a compelling portrait of a town that is both somewhat lost in time and somewhat ephemeral (it’s so quiet in the fall and winter that this year Miller went to Palm Springs for a couple months). Miller describes his fellow townies with gentle humor, reserving the somewhat more critical eye for himself. “I think people knew we didn’t know what we were doing, and were amused by our floundering in the beginning,” he says.

That floundering included vast cost overruns on the remodeling of the two buildings; an ill-fated attempt to open a second outpost in Spooner, Wis.; interactions with tourists good and bad; and small town celebrations that turned from sweet to sticky as the hours passed. It’s worrisome to watch the pair’s savings dwindle as they import finery from the world beyond to outfit their new businesses; at one point, Dean starts selling off the couple’s designer clothing on eBay (a Walmart shirt works just fine in Hayward).

Things looked grim at the end of the first year, as Miller tallies up the lessons learned and losses suffered, some significant and very sad. But nine years later, West’s Hayward Dairy is a must-visit destination in Wisconsin’s North Woods. Miller has modernized and revitalized the business and developed a successful wholesale ice cream line. The sumptuous McCormick House is widely regarded as a world-class inn.

Miller’s not the new guy in town anymore — he’s a local, with stories to tell.

Here’s the scoop on Hayward, Wis., and its cherished ice cream cafe