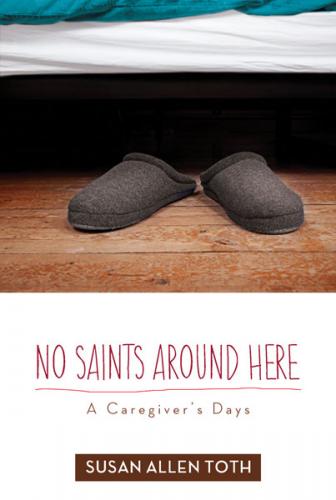 No one likes to think about it, much less talk about it, but chances are good that we’ll end our lives helpless and under the complete care of someone else. We just have to hope that person is someone kind or someone who loves us.

When writer Susan Allen Toth found herself taking on the role of caregiver for her husband, who suffered from Parkinson’s disease and later, dementia, she was determined to keep him in the Minneapolis home he designed, surrounded by the things and people he loved. But as his condition deteriorated, caregiving became more difficult. Physically demanding, emotionally draining, and costly, the duties began to wear her down. So naturally, for this author of seven previous memoirs (including “My Love Affair With England”), she found solace in writing. “No Saints Around Here: A Caregiver’s Days” (University of Minnesota Press) chronicles the realities of a largely hidden part of life.

“As the Baby Boomers age, more people become caregivers — as many as 40 to 60 million Americans are caring for a loved one right now — and I wanted to give them a book that would help them feel less alone,” she said. “I wanted to remind people that it’s OK to get frustrated, to get bitchy even, about having to brush someone else’s teeth. But you’re doing the best you can.”

At times, her observations are hard to face — especially as we contemplate our own twilight years. But she tells a hard story in the most engaging way possible, with a good dose of black humor. Tales from a long and happy marriage are interspersed with discussions of adult diapers, mobility challenges, the awkwardness that comes with sharing your home with paid caregiving professionals, and yes, brushing “those damn teeth.”

She also writes, with enormous pain and sympathy, about the mounting losses her husband, James Stageberg, faced. Stageberg was one of the Twin Cities’ most charismatic and unique architects (the blufftop retreat Toth calls his masterpiece is now for sale) and a mentor to many, yet in the last few years of his life, he was cut off from that world he loved. It’s heartbreaking to see the once gregarious man succumb to loneliness as well as physical discomfort, and Toth opens the discussion about the way we deal — or don’t — with illness and death.

In the end, thanks to his caregivers, Stageberg left the world with dignity and grace, under loving care. It’s the best that any of us can hope to have.

MinnPost: This memoir reads very much in the moment. Were you writing it as you were living it?

Susan Allen Toth: When I could get away, I would go to the Galleria and find a corner to write. I didn’t want anyone to hear me complaining, but if you’ve ever been a caregiver, you know you have to vent. Black humor seems heartless, but it’s one of those things that keeps you going. Friends going through the same thing would call me up and say, “You wouldn’t believe what just happened,” and I could say, “Oh yeah? I can top that!” And we would laugh. Writing about it gave me purpose and a relief from the everyday stress and worry.

MP: You actually don’t complain that much in the book, for what it’s worth. It’s actually more of a love story.

SAT: Well, we had an extremely happy marriage. I was so lucky to have found James and we had so much fun together. And James was a wonderful person to care for. He never became a different person, even when the dementia set in. And I was lucky, while so many people are not, that we could hire help. It destroyed our retirement fund, but we never had to sell the house and go on Medicaid — which is what you have to do, to get Medicaid, and then you go into a nursing home. I think of all the caregivers who don’t have what we had, and yet they still carry on, and I don’t know how they do it. But I was happy to do it for James. He was so exuberant, adventurous, interesting, and thought I was the cat’s meow. I just miss him so much.

MP: You write about how gregarious and vibrant he was, and then after he got sick, most of his friends stayed away. It’s the most difficult part of the book, to see him so lonely. What advice do you have for people who are avoiding ill or dying friends?

SAT: I am still trying to come to terms with that. Rationally, I understand how hard it was for people to visit someone who was dwindling away. He was such a social person, though, so it was painful for him. I think I understand — but it’s still hard for me to accept those absences when I think about what it would have meant to him. He loved people so much. I think people should always call or visit — even if it seems like a one-sided conversation, it still means so much to the sick person. You can tell them about your day, the weather, little stories, and they can feel connected again. Some people didn’t disappear. There were exceptions, and to them, I am forever grateful.

MP: Have you made a care plan for yourself, should you need help down the road?

SAT: I do not have a care plan, because I no longer have a spouse to care for me. My daughter is raising my grandson in New York, and I really don’t want to live in New York. If I get to the point where I don’t care anymore, I guess she could move me into a place near her, and pop in now and then to make sure they aren’t letting me develop bedsores. But I’m healthy, active, in good shape, so I’m not thinking that much about it. The fact is, if I need caregiving, it’ll have to be in an institution.

MP: Does that worry you?

SAT: Well, we all don’t want to think about being in that position. A friend of mine, whose parents are in their 90s and not doing well, told me, “When I get that old, take me out in the yard and shoot me.” I would hope that if I get that old, I will have enough reserves that I won’t have to go on Medicaid. And I just hope I don’t lose my mind.

MP: Are we going to be better prepared, as a society, to care for people by then?

SAT: I really don’t know how this country is going to be able to handle caring for the Baby Boomers. People are living longer, living with more debilitating problems, and we have no idea what to do about this. We couldn’t even get national health care [reform] passed without so much push-back and complaining and trauma, how are we ever going to come up with the rational social program needed to take care of so many millions of aging people? I don’t have any answers. All I have is commiseration and comfort to those caregivers who feel like they are standing on the edge of a cliff, because it really is that hard.

MP: You note that most caregivers are women. Is that part of the reason there’s so little help for caregivers?

SAT: It’s unfair, but so much of life in a patriarchal society is unfair. Men aren’t brought up to be caregivers, and women are expected to be — of children and people on the other end of life. But I think women are — usually — more natural caregivers. Maybe it’s cultural expectations, maybe it’s biology, but if you end up in an institution, you’d better hope you end up being cared for by women who do what they do out of a loving and giving nature. But even now, things are changing. Men are taking a greater interest and role in caring for their children, and maybe that also will extend to caregiving for elders. We wait for cultural change, but it affects everyone: Who will care for you at the end? That’s a big question, along with, how will you finance it?

MP: We’re talking about hard things here, and I want to convey to readers that you’re an incredibly cheerful and fun person to talk with. You’ve been through a hard time — so how are you so upbeat?

SAT: In my marriage, I was the pessimist, and James was the optimist. I was the introvert and he was the extrovert. I lost my father when I was 7 years old, and that teaches you early on that disaster can strike at any time. But my years with James were very nurturing. It was truly a marriage of equals, and he was the perfect complement to me. Living with him was not just an affirmation of life, but of myself. He loved me and helped me so much, and that, four years later, is still with me. He’d be very proud that I wrote this book, and that’s a lovely feeling.