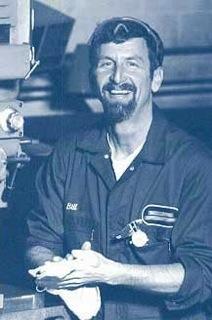 William Gurstelle recently moved, and so far, his new neighbors have been disappointed — or relieved, depending on how they feel about explosions. “I haven’t blown anything up yet,” says the Twin Cities writer and engineer. He’s best known for his first book, “Backyard Ballistics,” and apparently his reputation preceded him when he closed on the house.

“No one says, ‘Look out, that guy’s crazy,’ but yes, I think there may have been some talk. But it’s not like I’m a random pyromaniac. OK, I do bring the flamethrower out once in a while. But people love it. It’s breathtaking — it shoots flames 25 feet in the air.”

Don’t you wish you lived next door?

Gurstelle’s neighbors are completely safe. (Probably.) He considers his many books and his articles, which appear in Popular Mechanics and Make magazine, “PG13 how-to guides,” because sure, the experiments do involve some volatile elements (gunpowder, fire, various ballistics), but he emphasizes safety, care and consideration.

“There’s a time and place for everything. You just don’t blow things up in the city. Go out to the country for that, and don’t bother anyone, and have fun. Use your head,” he says. “People are going to make spud guns and flamethrowers. It’s just natural. So I’d like them to do it the right way, safely. My books are a blueprint for making fun stuff and there’s just not that much to worry about.”

Readers often send him photos and videos of the projects they’ve made based on his instructions. “I love seeing what people do with my books. Oh, but not always. Every now and then I open my email and, ‘Oh my God, you’re making a pipe bomb! No! Stop! Don’t do that! No!’ But 99% of the time, people are doing things safely.”

He’s less concerned about his readers causing mayhem and destruction than about the fact that our society is so risk-adverse that we’ve become afraid to experiment, explore and have fun. And without that ethos of exploration, innovation can’t flourish. Although Gurstelle grew up to become a mechanical engineer and perhaps the world’s foremost authority on catapults, he says he wasn’t a prodigy — kids just played differently before the advent of screen-based entertainment.

“Childhood was much more hands-on. We experimented. We all had chemistry sets and we figured out how things worked and invented our own fun. Nowadays, I’d be looked at as exceptional, but it was the norm of the day back then, for kids. But today we’re just consumed by fear.

“Take gunpowder. Gunpowder is the most important compound in the history of mankind. It was instrumental in the end of Feudalism and the rise of Asia. Its relatively easy to make and there are all kinds of neat things you can do with it, and people get so worked up about it. They say, ‘Oh, the government is watching you, they’ll call you a terrorist.’ No. The government couldn’t care less. The government isn’t monitoring you. It makes me sad how fearful people are, always worrying about the government or insurance companies or dangers that simply won’t happen if you do things the right way.”

At first glance, Gurstelle’s new book, “Defending Your Castle: Build Catapults, Crossbows, Moats, Bulletproof Shields, and more Defensive Devices” (Chicago Review Press), might seem to play into a sense of fear and paranoia, but these aren’t exactly practical projects. A moat is no longer the height of home security. Instead, the book serves as a guide to fun based on historical security devices. Gurstelle gives a basic history of the use and development of numerous simple yet ingenious devices, and explains in simple, step-by-step instructions how to do them at home — purely for fun. 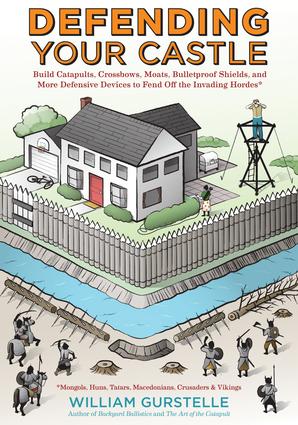 During his 25 years working as an engineer in the telecommunications industry, Gurstelle played around with catapults and other contraptions. Then he realized other people should be playing too, and wrote a book, with the intention of self-publishing. He bought a book on how to self-publish, and it suggested that he needed some promotional blurbs by experts. So he approached the science correspondent at the New York Times, who introduced him to a book agent. “We decided to demonstrate some of the book’s projects, so we went to Central Park in New York City, and invited publishers, and we brought out some rockets and spud guns and shot them off.  This was before 9/11, mind you. And later that day I had three offers.”

“Backyard Ballistics” has sold more than half a million copies, and became part of the tech end of the DIY renaissance. This fall, if you visit an apple orchard or pumpkin patch, chances are good you’ll see a catapult or apple cannon in action, and that’s partly the result of Gurstelle’s influence.

“Isn’t that great? Nothing compares to the catapult. It’s so simple, just gravity, spring, manpower — it’s one of the 1,000 most important machines in the history of the world. It’s so simple, and yet if you look at how complicated it is in terms of the physics and engineering that goes into it, it’s easy to understand how it works. You can’t look at a silicone chip and just see how it works. And you can’t make one at home using simple things. But you can make a catapult. Anyone can.”

William Gurstelle, the man who launched 1,000 potatoes, has a new book