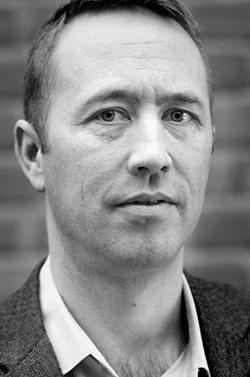 It’s not entirely evident, just squinting between the lines of his new book, whether Stephan Eirik Clark is poking gentle fun at local-organic-homemade food paranoiacs, or if he’s celebrating their freedom from the hegemony of chemical-laden processed foods. Could be a little bit of both.

In his novel, “Sweetness #9,” a young flavor chemist notices that the monkeys and rats in his laboratory are getting fat, depressed, anxious and stupid. In the years that follow, he sees the same symptoms proliferate in humans all around him, including his own family. The book is sprawling, encompassing decades of one man’s life, and the memories of another, implicating many in a dark, funny ode to better living through chemistry and the trade-offs we make between living well and doing good in this world.

For the record, as food goes, Clark finds truth stranger than fiction. The day we spoke, he’d planned to make his family a traditional Georgian (his wife is Russian) fresh egg-and-tomato breakfast dish, but he couldn’t find the recipe.

“There are many moments when I look at an ingredient list and wonder, ‘Should I eat it or not eat it?’ I try to avoid junk food, I’d much rather cook my own food, but it’s not always possible. And I have a sweet tooth, so I get petroleum-derived preservatives and who knows what else in my candy.”

There it is, sweetness. He knows all about it, and yet he’s caught in its thrall with the rest of us. Our collective sweet tooth has shaped society, the environment and the history of the world, and it doesn’t end with cane sugar. Clark’s artificial sweetener industry is built on a cast of geniuses, salesmen, villians, cancers and even Hitler, yet, he too, would really like a candy bar.

Clark teaches at Augsburg College. The book comes out today; there will be an event at Common Good Books in St. Paul, at 7 p.m.

MinnPost: Let’s start with the question you’re probably getting tired of answering. “Sweetness #9” got the “Colbert Bump” last month. How did this happen?

Stephen Eirik Clark: Three days before the show aired, my publicist called and said that Edan [Lupucki] would be talking about the book on “The Colbert Report.” I was amazed, and so grateful, and really, it’s been surreal, like I’m living in a parallel universe. [Lepucki, author of “California,” had been “bumped” herself by the writer Sherman Alexie, who plugged her book when he went on the show to discuss the controversy between Amazon and Hachette, the publisher behind the imprints that publish these three authors.]

MP: It must be a frustrating time for a Hachette author to make his debut. Are you worried? [The dispute, condensed version: Amazon wants Hachette to lower e-book prices; Hachette is refusing, on the grounds that doing so would hurt authors and bookstores; Amazon has retaliated by halting preorders on books on Hachette imprints, delaying shipment of those titles, refusing to offer its standard discount pricing to those titles, or refusing to sell them at all. Little, Brown, Clark’s publisher, is owned by Hachette. As of publication day, “Sweetness #9” appears on Amazon, with a 10 percent discount.]

SEC: Well, it could have a significant effect. … I have only one chance to debut as an author, and after working on this book for 13 years, I’d really like it to survive on its own merits, and this situation complicates that. But I’ve made my peace with it. Writing is always an act of faith, there are no guarantees of success, ever, really. …

MP: Thirteen years, yikes. But you’ve been writing other things, too. We talked about your short story collection [“Vladimir’s Moustache”] last year, so you must have multiple projects going simultaneously.

SEC: Well, the novel actually came first, but it was slow-going, and meanwhile, all my peers in my MFA program were publishing short stories, before moving on to novels. I felt like I didn’t have the confirmation I needed to tell me that this was something I should even be doing. I needed feedback. I had written another novel that was going nowhere — I think a lot of writers have a failed first novel in a drawer somewhere. So I wrote the stories to convince myself that I shouldn’t give up.

MP: “Vladimir’s Moustache” is a collection of stories set in Russia, and the writing has a strong Eastern European tone and ethos. Meanwhile, “Sweetness #9” is very much an American story, filled with American behavior and anxieties. How do you move between these different worlds so easily?

SEC: Well, I was born in West Germany, my parents are Norwegian and Texan, and I’ve lived in the Ukraine and Russia, and I had an English accent when I was a boy. So I’m constantly hearing all these different voices, and thinking about all these different places. And some of that comes out in this book, too, in the parts about Germany and Hitler’s bunker, which of course is all made up, but I could get myself there. When you are writing, you can be anywhere — nothing else exists. 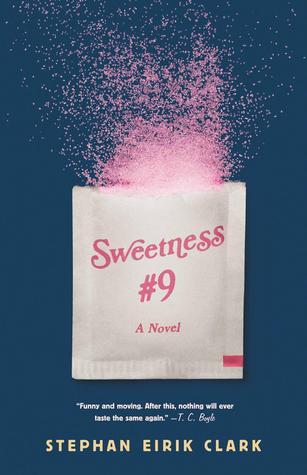 SEC: I’ve heard the term satire used about the book, but I think of it more as an absurdist work. It’s real and it’s absurd, and that’s pretty much how I see our world. So I think of myself as an absurdist. It’s clear and obvious that Don DeLillo and Thomas Pynchon are huge influences for me. And T.C. Boyle, who was a professor of mine at USC when I dropped out of film school and decided to try creative writing. He’s just an amazing teacher and I somehow walked into the perfect writing class for me. He’s been a mentor ever since.

MP: When we spoke last year, you were worried that our culture’s food anxiety was of the moment, and that moment would be over by the time the book came out. Since then, we’ve also wrestled with questions related to whistleblowers, so your book continues to be quite on the pulse of society.

SEC: Yeah, that became a big part of it. I didn’t want to write a heroic book. I wanted to explore the real difficulties and complexities a character faces in terms of work and family. And I’m very aware of the fact that whistleblowers don’t always blow the whistle. I don’t know if we’ve done things that make it easier for whistleblowers, or if things, since Edward Snowden, have been chilled. I wanted to explore that uncertainty, complexity in everything. Like [a character in the book] says, if we eat something that takes off five years of our life, we can take a pill to give us back 10. Those are tradeoffs that we have to make peace with.

MP: You obviously did a fair amount of research into food additives, dyes and the whole history of processed food. There are little homages in here, such as to Clarence Birdseye [who perfected technology to transport frozen food]. How did this book affect the way you eat?

SEC: Well, I’m aware of the facts. Processed foods are probably not something we should be putting into our bodies. But we don’t live in a culture where we have three hours to prepare a fresh, multicourse meal and then linger over it, as they do in some places. We shouldn’t have to buy $12 a gallon milk to have safe milk, we shouldn’t have to pay $12 for a box of eggs, though. So many of us have to cut corners, due to time or economic factors. But also, it’s not that hard to eat simply.

MP: So you view food safety, or food justice, as largely economic issues.

SEC: Well, that’s another book. Actually, it’s my next book. I’m exploring the fallout from the Great Recession. How we have handled justice in this era of companies that are “too big to fail”? How can an individual steal a loaf of bread to feed their starving family and be punished with years of jail, while a corporation can make a move that impacts millions of people for generations and get away with it? These are my new worries. I’m not so much interested in writing autobiographical fiction. I’m more interested in looking around at the world and writing about what I see out there.