The plan used to go like this: “Graduate high school, maybe go to college, get a job, hit 60, retire, and then do all the things you’ve always wanted to do. Well, no. It’s not like that anymore,” says Chris Farrell. And good thing it isn’t, he says, because in reality, most people aren’t happy in a play-all-day-till-the-end lifestyle. Instead, working a few years longer, or working elsewhere, or working less but staying fully engaged with society may be the key to a happier retirement.

As the baby boomers exit the work world — or don’t — it’s time for society to change the way it defines retirement, says the longtime commentator on personal finance issues. Farrell has spent much of his career talking with people about ways to fund their retirement. He hosted TPT’s “Right on the Money” program, he’s written about finance and economics for numerous newspapers and magazines, and he’s the senior economics contributor at American Public Media’s Marketplace. So he’s been exposed to plenty of what he calls “fearmongering” — stories about how Social Security is going to dry up and people will have to work at terrible jobs until they die.

“So much it is overly alarmist and just stokes this clash of generations as younger workers are being warned that the ‘gray tsunami’ of retiring baby boomers is going to ruin everything for them,” says Farrell. “I got very frustrated with that outlook, because I don’t think it’s true.”

Instead, he suggests, baby boomers might actually fix retirement for younger generations, by redefining what retirement looks like, how it’s funded, and what work could look like in our 70s, 80s and possibly beyond. His new book, “Unretirement: How Baby Boomers Are Changing the Way We Think About Work, Community and the Good Life,” (Bloomsbury Press) chronicles the evolution of retirement in the U.S., from the almshouse to the 401(k). He dispels myths about older workers, suggests ways in which older workers facing reduced means or job opportunities can regroup, and promotes the idea of phased retirement, in which workers gradually reduce the number of hours they spend working.

“The biggest beneficiaries of this process will be the younger generations. By the time my 22-year-old is 50 or 60, the path will be clear. But right now, we’re in a period of experimentation and exploration. We’re at the grassroots level of this experience. We know our aging and retirement will be different than previous generations, but we are still trying to figure out what that will look like  — we’re still even trying to decide what to call this. In Britain, they are calling it the Third Age, I’ve also heard Next Chapter. There are numerous entities involved in this conversation, including some local ones, like Shift and Encore. But you can’t just Google ‘retirement’ and come up with an easy answer.” 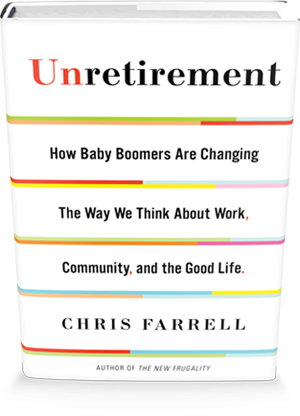 In “Unretirement,” Farrell interviews numerous people who are retiring on their own terms. He talks with an engineer turned consultant and volunteer; a pastor turned van driver; people who have traded the corporate world for nonprofits or for businesses of their own invention. He looks at companies that have adapted workplaces to help older people be comfortable and productive. Many of these people were forced to change their work lives by layoffs, while others left their previous careers financially secure and used the next phase of their life to pursue work that had more meaning.

Farrell acknowledges that while some workers plan a joyful “unretirement” full of meaningful work, mentoring, and volunteering, the widening economic gap in this country means that huge numbers of people will work into retirement because they have to, at jobs they consider their only option but may not love.

“It’s not all romantic, it’s not all wonderful. Bodies burn out, people run out of money, opportunities don’t come through for everyone. Ageism in the workplace is real. There’s a huge group — warehouse workers, clerical, food service, checkout workers — who never had an employer health plan, never made a lot of money, couldn’t amass a lot of savings. Their pension plan is Social Security. My argument is that we shouldn’t be talking about cutting the Social Security benefit, as so many people are; we should improve it,” he says. “In the vanguard, we will see college-educated, white-collar, career oriented people helping to define aging and retirement. But that will bring about larger societal changes that will enable others to take part as well.”

One example he hopes will catch on is phased retirement. Starting next year, federal government employees will be able to work half time while receiving a half pension.

“If this takes hold, it will have huge implications for the private sector, and for people wishing to remain in the work force while taking a step back,” he says. “A Rand Corporation study found that within two years of retirement, 25 percent of people go back to work. And you might think they did that because they needed the money, but that wasn’t it — it turned out they wanted to be engaged in work and society, and they missed that at home. What they really wanted was a long vacation. A break. It wasn’t that they didn’t want to work. They just needed time off.”

Farrell would like to see sabbaticals, gap years, and phased retirement become norms for more people entering the “next phase” of their work lives. But first, he says, we need to change the way we think about older workers. Instead of pushing them out, find new ways to keep them in. For older workers, instead of seeing younger workers as being “after my job,” experienced workers can embrace and extend their mentoring capabilities. “There is a notion that once you reach a certain age, you are no longer creative, no longer relevant, and have nothing to offer. But when we see ourselves as vital, then we remain vital,” he says. And simply staying in the work force helps keep people vital.

“There’s a complex relation between the fact that we’re living longer so we’re working longer, and also because it working improves our health so we live longer. There’s all kind of research that shows that the kind of things we get from work are beneficial to our health — social engagement physical activity, mental acuity. They say to a new language to keep your mind sharp — well, learning new software every couple of years does that too,” he says, noting that an even greater benefit comes from simply working with others.

“Work is a social institution. Someone cares if you show up. Birthdays are celebrated, life events are recognized and we show concern for each other. We gossip. For many people, work is community. That is part of the lure, and attraction, of working beyond retirement. You remain part of the community.”

Looking ahead, enjoying the present

What about Farrell? He’s 60, in case you were wondering. And no, retirement isn’t something he’s thinking about right now.

“Of course working on a project like this got me thinking about my own life. But I’m not looking to make any changes right now. I love journalism. I love getting out there and thinking about things and testing out new ideas and talking with people. It’s true, journalism is a harsher world, and in some ways, it’s a younger person’s game. But I’m really enjoying it, and doing all different forms — radio, television, print and online. This topic in particular is really engaging. The next five years are going to bring about huge changes in how we deal with this in our society. I think my book will stay relevant, but I think there are going to be many conversations coming out as this generation works through the issue of retirement. I think I’ll have a lot of new things to say. So, I can already feel the lure of a next book.”