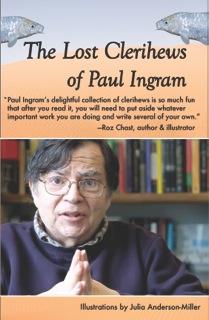 Paul Ingram is a legendary bookseller, the kind of bookseller who knows books and readers equally well and matches them with a mix of arms-flapping enthusiasm and cranky wisdom. If a writer of fantastical worlds needed a bookseller character, he or she might drive to Iowa City and hang out at the Prairie Lights Bookstore, where Ingram has worked for 25 years, and study him in action, and then they’d have a pretty good idea of how to write a pretty good bookseller. Either that, or a mad scientist.

In particular, Ingram is known for being a great picker of books. People visit from all over the country to load up on his recommendations, which are made with far more thoughtfulness (and far less interest in sales numbers) than any particular website’s algorithmic upsell of “Customers Who Bought This Also Bought This.” He wants readers to read not what everyone else is reading, but what is more quietly wonderful and might even change your life.

After spending a life in the stacks, Ingram finally put something with his own name up on the shelves. “The Lost Clerihews of Paul Ingram” celebrates a nearly forgotten form of poetry, the clerihew, which is best described as a nonsense kin to the limerick. Clever, funny, sometimes ribald rhymes are constrained to a tight, AABB rhyme, four-line form, and they are inspired by the names of famous people. Complete irreverence is required: In this collection of a couple hundred clerihews, Ingram rhymes Rothko with Costco, Tennyson with venison, and Wordsworth with turd’s worth. Probably no one has done that before.

MinnPost: Most people have never heard of clerihews. Why did you start writing them?

Paul Ingram: Every Brit knows what they are. No Americans know what they are. But they are great fun and a good way to memorize people’s names, and they just started coming out of me, as a byproduct of my job as a bookseller. You go through all these books, and see name after name, and at a certain point you get too many in your head, and they just spill out. I don’t have a lot of time to write longish things, but clerihews, you can write them in seconds, and fit them on a Post-it note.

MP: And then you lost them?

PI: Yes! About 20, 25 years ago, I actually could not stop writing them. My wife and co-workers were getting pissed off because I was going a little nuts with them. So I put them away, and they were lost for years. Then one day I said, ‘Where are those things? I have no idea!’ I went down to the basement and dug them up. And called up friends who I’d sent them to, against their will, and they happily sent them back and I discovered ones I had completely forgotten. And I picked out the best ones for the book. And I’m writing them again, maybe 30 or 40 new ones just since the book came out.

MP: Are you the only clerihew enthusiast in these parts?

PI: Not at all. A few people, other than myself, are completely obsessed with them. [The writer and theologian] G.K. Chesterton was a clerihew enthusiast and a friend of Edmund Clerihew Bentley, who originated the form. Minnesota is actually home to the world headquarters of the American G.K. Chesterton Society, and his fans appreciate clerihews, because he sure did. So maybe the Midwest is the center of American clerihew world. People send me their clerihews through email or Facebook. I think they could make a comeback — they are perfect for Twitter.

MP: You don’t come to Minnesota often, but when you do, what bookstores do you visit?

PI: Oh, I’ll probably stop in at Common Good, maybe SubText. Birchbark Books, Louise Erdrich’s shop, is very, very good. They have a wonderful children’s section, and I would like to pick up some things for my grandchildren. The thing I don’t understand about the store is, how does it make any money? How? Because all of her books are good! Usually the way it works is, you have to sell lots of lousy books to be able to sell a few really good books. That’s just the way it is.

PI: Well, sure. We have to. And we keep selling the same lousy books over and over with different covers. For a while it was lousy vampire books. Then it was lousy zombie books. And even real good writers were putting out zombie books, because their publishers said, ‘Write a zombie book and we’ll give you six times as much money.’ Publishers will not take a chance on something new. So people just keeping the same garbage over and over. It’s appalling.

MP: So how do you encourage those readers to try something new?

PI: Well, I get them to trade up. There are always better books, in any category. And when someone is exposed to better books, hopefully their standards are raised. Say someone comes in and says they like chick-lit. Well, then I’d have them try something by Diane Johnson, who is a very smart, very funny writer. And that would show them you don’t have to follow the usual formula, and the next time they’d take greater risks and find better books, maybe really good books that could change their life.

MP: What book changed your life?

PI: “Of Human Bondage,” by W. Somerset Maugham. That absolutely changed my life. I read it when I was a young teenager and loved it, and read it again as an adult found so many things I’d missed the first time. He just has this wonderful style, transparent prose plus a great character that you can’t help but be on the side of, even though he has everything going against him — you just want to be there for him.

MP: You’ve been often called a ‘tastemaker.’ Do you think you’ve influenced the book world — especially since you influence so many writers who are teaching at or attending the Iowa Writer’s Workshop?

PI. Naw. Well, I suppose so. Probably not. I do know a lot of those classes read books I’ve recommended. I suppose that counts for something. I am responsible for making a huge number of books incredibly popular — in Iowa City. But I don’t think it makes much of a difference. I want people to read good books, but maybe we’re heading towards an age where books don’t matter anymore, or people don’t read anymore.

MP: Do you really see that happening?

PI: It could! If the presence of evil, in the form of Amazon, can take over the book world, then anything could happen. People who have power don’t care about books. I don’t have any power. I just care about books.

Oct. 5 at noon: Reading at the Iowa City Book Festival