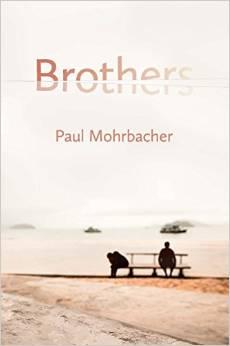 Paul Mohrbacher’s “Brothers” (Keen Editions) begins in a nursing home, and the action would probably stay confined to those gently padded walls if not for the free spirit of one of its inmates, the once-brilliant psychologist Nick, who is dying after decades of addiction and a prolonged stint as one of San Francisco’s many homeless people. When Nick’s estranged brother Ben arrives from North Dakota intent on settling some scores and getting some answers about the death of his wife, Nick sees his chance to escape the well-meaning staff and take one more tour of the city. In this fast-paced and surprising tale, a simple day outing turns into a two-week series of misadventures that challenges conventional thinking about older people, homeless people and addicts, and the wisdom of talking to strangers.

Mohrbacher recently retired after working at the Science Museum of Minnesota for 33 years, first in communications and PR and later working on programs to make the museum accessible to people across the economic strata. “Brothers” is his second novel. The first, “The Magic Fault,” is a thriller in which a band of priests steal the Shroud of Turin in an attempt to save it from an increasingly Muslim Europe, hoping to bring about the second coming. His play, “The Chancellor’s Tale,” chronicles the struggles that a church experiences after a pastor witnesses a union ceremony between two women. In “Brothers,” Ben and Nick strike up a conversation with a former nun and her friend that ends up changing all of their lives.

MinnPost: Your work takes very different forms, but Catholicism is a prevalent theme in all of your writing.

Paul Mohrbacher: It has been a major theme in my life, so it comes into my writing. I am a former Catholic priest. I resigned in 1976, when I realized celibacy was not a viable option for me, and I married five years later. We have six grandchildren today.

I worked at St. Stephen’s Church in South Minneapolis in the 1970s. That was an eye-opening experience. We had a very diverse population, with many gay and American Indian members and people from all walks of life. I’ve taught Latin as well, so I made Ben a Latin teacher. Ultimately, I ended up at the Science Museum and enjoyed my work there immensely, particularly in making it more accessible to all Minnesotans. We have a wonderful resource in that museum and everyone should be able to enjoy it.

MP: This novel touches on so many things we don’t often see in fiction or even hear discussed in life — group homes, sexuality among seniors, over-medication of patients, and “sundowning,” a psychological phenomenon affecting dementia patients. Where does your interest in these topics come from?

PM: I first became acquainted with sundowning though a friend of mine who was suffering from dementia and became quite anxious at the end of the day. You’re right, we don’t hear much or talk about it, but it’s very common, and most people don’t understand how to deal with it, which is why so many places just drug seniors at night. My friend eventually ended up at the Veteran’s Home, where they do understand it better.

A few years ago, I read an article about a nursing home in Brooklyn that dealt with sundowning by taking the residents out on the town. They would regularly go out at night and have a really good time, and stay out all night long, or as long as they could stand it, and it helped immensely. Now, in the last decade, I’ve seen several of my friends go to these places, so it’s on my mind.

MP: Nick makes a huge difference for the other people attending Elder Town [a day program for seniors] by organizing his “night revels.” Did his ideas come from that article?

PM: In part, but also just from his personality. Nick is a narcissist, but as narcissists do, they contribute a lot to other people’s lives. He’s a fairly obnoxious guy, but people are drawn to him anyway because he generates fun and intimacy and makes the best of the situation — and most of the people he’s with aren’t in very good situations. Of course, he does this in part by denying he’s really in the situation he’s in — that he’s dying. Yet even so, it’s like that saying, ‘When you’re deep in manure, shit doesn’t get any better than this.’

MP: You seem to understand that personality type pretty well. Is there a Nick in your life?

PM: Well, in some ways he resembles my own brother. Some of this went on in my own life. One brother is the more introverted and the other is the wild man. I drew on Cain and Abel and the prodigal son. I’m trying not to be too autobiographical here, because the book is fiction, but I wanted to explore the alienation that occurs in so many families, because of business, or money, or inheritance or addiction or so many other reasons. Yes, my brother managed to foul up some things and I wanted to explore that in fiction. But I was actually surprised by how much latitude I gave Nick to have all those zany escapades — stealing a doctor’s coat and breaking out of the hospital, smoking pot on the beach with a group of drug addicts. I ended up understanding him better. I guess I tried to imagine how the situation with my own brother might have played out differently.

MP: You play San Francisco against North Dakota as opposites too. When someone asks Ben if Bismarck is a happening place, he says, “Not that I’ve noticed.”

PM: Yes, although I hinted at the ways in which North Dakota has more going on than meets the eye. I’m a former Latin teacher, so I made Ben one too, but I also wanted to point out that there’s a school in North Dakota where young people are learning Latin. People might not expect that. Bismarck is a city of contrasts way out in the prairie. It’s culturally very happening; they have a symphony orchestra there, for instance. I’m impressed with the way some of these towns that time forgot — as Garrison [Keillor] would call them — are actually much more lively than you’d give them credit for.

MP: You won the Julie Harris Playwright Award Competition for your play, and this book has such a rollicking pace. It’s compact. Did you intend to write it as a play?

PM: I am actually adapting it for the stage now. The pace is fast because I felt like I had to keep it moving. Nick didn’t have long to live and he had to fit in as much as he could in a short time. I also didn’t want to get bogged down in any of the tragic elements of the story, so I mixed in a lot of comedy, which always brings in energy. Just as they say, time passes much more quickly when you’re having fun, and Nick was always the life of the party.