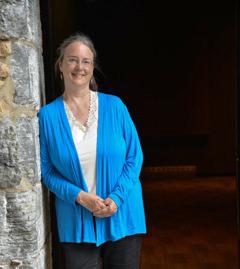 In a city that so eagerly paves over the past, the Mill City Museum is a rare triumph of history. The ingeniously preserved ruins let visitors see, hear, touch and even smell the days when Minneapolis was the flour milling capital of the world. The moment Kathleen Ernst toured the site, she knew it would be the setting of her fifth Chloe Ellefson mystery. The writer and historian could easily see past the shiny Mill District’s modern lofts, the Guthrie Theater and the chic farmers market overlooking the river, to the days before the catastrophic fire that nearly destroyed the Washburn A Mill in 1991 — and even to the days before the original mill burned in 1874.

“Tradition of Deceit” (Midnight Ink) is set in the 1980s, when the mill was populated mainly by homeless people. Chloe Ellefson, a Wisconsin historian, comes to Minneapolis to visit a friend, and visits the mill with a team of historians. The mill, abandoned and fenced off, is dangerously derelict, and the explorers know that many people have died there: workers caught in the equipment or in the mill explosion a century before, as well as homeless people and explorers in recent times — and then there’s that body stowed in a grain chute. Chloe finds herself entangled in a Minnesota mystery, while her police officer boyfriend back home in Milwaukee tries to unravel the murder of his best friend on the force.

To join these parallel mysteries, Ernst draws upon Minneapolis’ early immigrant community, and creates a third narrative that connects Minneapolis to Milwaukee through shared culture, and the efforts powerless people made to create a better life for themselves.

MinnPost: You and Chloe Ellefson are based in Wisconsin. Why did you decide to send her across the border?

Kathleen Ernst: Chloe will stay rooted in Wisconsin. However, one of my goals with the series is to celebrate the heritage of the Upper Midwest, and so occasionally she may have reason to cross state borders. I love having the opportunity to shine a little lamplight on wonderful historic places that deserve more attention, and my readers love visiting new locations — both within the pages, and often on road trips after reading.

MP: Why did the Washburn Mill Complex catch your attention?

KE: Most of my own background and study has dealt with rural immigrant history. Historic sites that focus on industrial history are much less common, because of the obvious challenges of maintaining both the buildings and whatever machinery or equipment is involved. I loved having the chance to delve into a setting that was, for me, very new.

I also was drawn to the many layers of stories that are part of the Washburn Mill Complex history: The importance of the flour milling industry to Minneapolis and Minnesota; the science of flour milling; the impact on farming in Minnesota and beyond; the changes in work force over the years, including immigrant stories, women’s roles, and labor issues; marketing, including Gold Medal Flour, Betty Crocker, the Pillsbury Bake-Off, which gives the story personal meaning to almost everyone; what happened within the mill after it closed, and the social issues.

MP: Tell me about your experiences researching the Mill District sites and history.

KE: I began by touring the museum a number of times, learning about the industry, talking to interpreters, and studying the artifacts on display. In addition to exploring the exhibits myself, I like to watch how museum visitors move through sites and museums. My husband and I also took several of the special Washburn A Mill special walking tours, which take groups behind the scenes. The tours vary a bit from guide to guide, which was very helpful in giving me different glimpses of the landscape; and different guides tell different stories, which was also helpful. I also spent time at the Minnesota History Center. And because I’m a hands-on kind of person, I had fun trying some of the old recipes from early Gold Medal cookbooks, Betty Crocker recipe cards provided as promotions, Bake-Off winners, etc. I took a few workshops to learn about wycinanki, the Polish folk art featured in the story, as well.

MP: Did you get to tour any parts of the mill that aren’t open to the general public?

KE: The special Washburn A Mill tours give participants a great behind-the-scenes look at some of the nooks and crannies of the mill. They provided a wonderful sense of place, as we sometimes wound through narrow corridors or passed places where bits of old equipment or crumbling stones were still untouched. Those tours also include the room where the turn head distributor is, which I used as setting for the murder. As I understand it, much of what’s there is still waiting for a day when additional resources will make it safe and feasible to delve more deeply into the mill.

MP: How did your background as a social historian train you to approach the research for this book?

KE: I’ve always been interested in the lives of everyday people, especially those who might not have left a tangible record behind — no handy diaries or letters, for example. When I worked as a museum curator myself, I could speculate, but I could not fabricate. Now I try to bring the full spectrum to my novels. I research the historical stories as best I can, and then fill in the gaps. 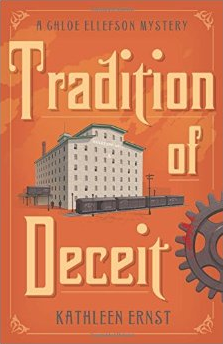 I’ve written many mysteries and have developed a filter in my brain. [Ernst also writes historical character books and mysteries for the American Girl children’s series.] As I do preliminary research, I automatically take note of not only good places to hide bodies, but every potential source of conflict and place of potential danger. Needless to say, the mill as it existed in the 1980s was one of the best settings imaginable for a murder mystery. Readers love exploring places they’ve read about in the books, so I try to choose artifacts and settings that are all available for their exploration. I chose to have the body found within the turn head distributor because it’s a room visitors can visit if they take one of the walking tours.

MP: Did you observe any differences between the way Wisconsin and Minnesota approach or preserve history?

KE: I actually noticed more similarities. I was employed within the Historic Sites Division of the State Historical Society of Wisconsin, and so have a good sense of working at a site that’s part of a huge organization, just as the Mill City Museum is governed by the MHS. It can make things a little more complicated because there are administrative layers to everything, but it also provides access to many experts.

The only marked difference I’ve noticed was within the library. The SHSW library has open stacks, meaning patrons retrieve their own books, while the MHS has closed stacks, and must request specific titles. As a researcher I love to wander, and have found many treasures just by scanning shelves and stumbling over titles I wouldn’t have known to look or ask for. The library staff in Minnesota are fabulous, and I understand the need to protect collections, but I always wonder what I’m missing.

MP: There’s virtually nothing left to suggest that the Bohemian Flats community ever existed. How did you recreate this place for your book?

KE: It is amazing to visit the site and see … absolutely nothing. Fortunately a number of photographs have survived, some in the Hennepin Library collection and some held by the MHS. Also, a Federal Writers’ Project book called “The Bohemian Flats” was published in the 1940s, and has some wonderful descriptions of this once vibrant community. The rest emerged in my imagination.

MP: As discussed in your book, the mill workers were involved in some of the region’s most important moments in labor history. As a Wisconsinite, did this topic hold extra interest for you, given your state’s recent union battles?

KE: It did. One of the important aspects of studying and interpreting historical events is that the past is always present. It’s fascinating, often painfully so, to see what events led us to a certain place, to see how a situation has improved, or what battles are still being waged. Living so close to Madison — I’m in a suburb — I’ve had a front-row seat to the labor struggles. I also did my undergraduate work at West Virginia University, and so my first introduction to labor issues had to do with coal miners and truly horrific situations. I always think about how many workers have struggled and sacrificed over the last century and more to achieve protections for workers, and it’s heartbreaking to see how quickly their work can be negated.