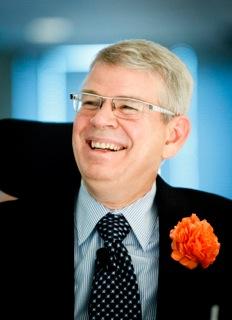 About two years after Bruce Kramer was diagnosed with amyotrophic lateral sclerosis (ALS), he lost the ability to hold a pen or tap a keyboard. As the neurodegenerative disease progresses, motor neurons in the brain stop communicating with the body’s muscles, ultimately resulting in paralysis. Kramer had been writing about living while dying in the popular “Dis Ease Diary” blog and he was putting together a book based on his essays. And then this. Talk about writer’s block.

Not many years ago, a patient at this point would have been silenced. For Kramer, however, this was an opportunity to learn a new language. The former dean of the College of Education, Leadership and Counseling at the University of St. Thomas wanted to continue to connect with his audience. Now, with the help of Dragon speech recognition software, he can do so, and quite adeptly. It was not an easy transition, but this new method enabled his thoughts to take flight.

“I used to think with my fingers. Now I write by speaking. Making that change has been the biggest crisis I have dealt with, with ALS. I suddenly needed to think verbally, to hear what I was saying and compose out loud. It was incredibly challenging to move to an aural thinking process,” he said in an interview via Skype and FaceTime. “Fortunately, I was always a person who listened.”

The chapters in “We Know How This Ends: Living While Dying” (University of Minnesota Press) are economical in length but poetic in clarity and impact. This, Kramer discovered, is one of the “gifts” ALS has given him, the ability to listen to his own thoughts and share them in a deeper, more incisive way.

“Writing for voice-to-text causes you to be more circumspect about what you say. There is more weight on word choice and little time for excessive language. I came to appreciate the fact that my writing could take on this amazing, jazz-like quality. In poetry, you are trying to be so concise that it forces you to utilize vocabulary or structures that have deeper meaning than you usually find in non-fiction.”

Kramer’s book explores the ways he’s making his last years among his best years, instead of wasting precious life in self-pity or debilitated by grief. With a heightened sense of value, he embarks on a last visit to places he has lived and loved around the world. He immerses himself in music, ponders matters of faith, watches his family expand around him, receives a blessing from the Dalai Lama, and remains funny, philosophical and generous in his wishes to give his fellow travelers a guidebook to a better death. Throughout, he remains grounded in his own reality. He goes skydiving — but then soon after, he flips his wheelchair, a frightening and humbling reminder that he is not overcoming, but rather, continually adapting to a body that is changing day by day even while his mind remains vibrant.

Ultimately, we will not win the battle

The sheer beauty of Kramer’s language as he traverses emotional and philosophical territory does not distract one from the practical topic of the book, which is frankly one that we tend to avoid in literature as well as conversation. All buckets of ice notwithstanding, there is currently no cure for ALS, and Kramer is steadily moving toward death. He is now in hospice. But, he points out, we all are going to die. Yet our society is only beginning to discuss the ways in which this experience can be appreciated as part of the richness of life. The popular narrative associated with disease tends to focus on overcoming: We will beat this thing, we will find a cure, we will inspire others by winning the battle. Yet ultimately, we will not.

“That is the myth our culture perpetuates, this myth of immortality. The disease is a challenge the person overcomes. I felt like that story is a lie that needed to be put into its place. The standard course assures us that we are all going to die. We know this, so why do we not discuss this?” says Kramer. “I readily admit that I bought into it as much as anyone. I thought that by being physically active I was inoculating myself. And yet here I am.

“I also wanted to avoid a certain kind of voyeuristic book on disease: Here’s what this symptom does for me, that kind of thing. I think the idea behind that is shock value. I’ve never been comfortable with that genre.”

Instead, Kramer’s book joins a few others that herald a new way of thinking about the end of life. He looked at works like Susan Spencer-Wendel’s “Until I Say Goodbye,” Christopher Hitchens’ “Mortality” and Atul Gawande’s “Being Mortal: Medicine and What Matters in the End,” which he appreciated for their clear-eyed confrontation of the facts of life and their goal to inspire quality of life within the singular experience of dying. His own book embraces life as it’s given to us — the full picture of life, which includes disease or disability for most of us. “Part of the myth of immortality includes the idea that death comes with despair. Yet by embracing the inevitable, you get gifts,” he says. 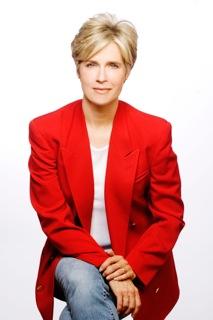 Kramer has discussed these gifts in a series of conversations he’s done with “Morning Edition” host Cathy Wurzer on MPR. The Living With ALS series has touched on topics such as the way doctors deliver a diagnosis like ALS; making plans for a good death; relating to others who are experiencing life with disability; and welcoming the next generation at the end of one’s own story. He asked Wurzer to collaborate on this book.

“I needed someone who could add context,” he said. He also wanted to make sure the book held relevance for people beyond the ALS community. Ultimately, Wurzer wrote introductions for each of his chapters. “Don’t think it happened easily. We really stumbled with what she was going to write. At first, we were wary of each other. She was analytical but not all in,” Kramer said.

“I was wary about getting involved because of what was going on in my own life, with the end of my marriage [to Eric Eskola] and my father’s death [from Alzheimer’s],” says Wurzer. “I’m used to being a lone wolf on “Morning Edition.” This was a different experience, collaborating with someone. But Bruce trusted me, and in the end the sections I wrote serve as ‘fence posts’ connecting his writing. It’s kind of what I do on radio.”

Wurzer says writing those fence posts has led to a richer series on the air. As their friendship developed, the experience also transcended journalistic process to become something much more personal. When Kramer encouraged her to write about her dad, to expand the book to include caregivers and others touched by the experience of dying, Wurzer found herself facing her own grief head on. 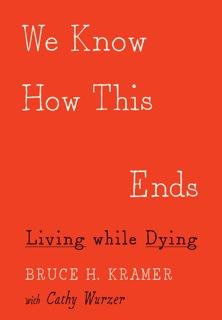 “It was difficult. There was a sea of tissues on the floor of my office as I wrote about my dad,” she says. “Working with Bruce opened me up, made me more human as a journalist — not that I wasn’t before, but it’s allowed me to relate to others without a certain amount of barrier. I’m more comfortable being Cathy Wurzer, instead of ‘Cathy Wurzer, journalist.’ I’ve learned to understand that there is a pool of energy that accompanies death that is more than just sadness, it’s about love and gratitude.”

Ultimately, that’s exactly what Kramer’s book is about.

“I could have written it myself,” he says. “But I have found, particularly with ALS, that it is in connecting with other people that much of the gift is revealed.”