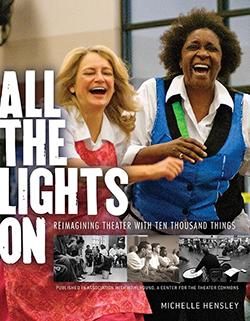 Theater is changing, and someday, when people study how that happened, they will talk about Ten Thousand Things, a scrappy little Minneapolis theater company that for more than two decades has given away as many tickets as it has sold, staged shows without a stage — often in homeless shelters and prisons, and discovered the secret to storytelling that appeals to truly wide audiences. Founder and Artistic Director Michelle Hensley has written “All the Lights On: Reimagining Theater With Ten Thousand Things” (Minnesota Historical Society Press), a book that describes the history and vision of her theater company, but it may well be taken as a manifesto for all theater to come: To survive, adapt — and here’s how.

Hensley knew she wanted a life in theater, but she says she came away from graduate school knowing what kind of theater she didn’t want to make. She noticed how few people actually attended theater, how homogeneous they were, and how unaffected they seemed by their night out: theater as obligation. She also noticed how many people were left out of this experience she found so moving, instructive and joyful, and decided she would make theater for them.

She founded Ten Thousand Things to prove that you don’t need big budgets and elaborate sets to create a deeply affecting performance. She brought theater directly to people who would never be part of the traditional theater audience. She put her actors in the middle of a room full of folding chairs, with all the lights on, and the actors were inspired when they could see the audience reacting — and the audience reacted more intensely when the barriers between the performers and themselves were dropped. She searched for stories that would touch all audiences.

“The balance is shifting. Theater is not going to be able to be keep going if it only relies on stories by and about white men, or ‘rich people being awful to each other,’ as so many plays are about. We need to find ways to tell stories that appeal to all of us. The divisions are getting so extreme in our society, so it’s getting urgent,” she said. “Always, the project of Ten Thousand Things is to figure out what we have in common as human beings. Usually, it’s humor. Sometimes it’s Shakespeare — but we can’t do it the same old way. Often we rely on stories that have some basis in fairy tales. In storytelling, the fairy tale has always been a place where we meet as equals, a common ground, because we all know those stories or stories like them.”

Hensley’s book describes how she chooses plays and adapts them for diverse audiences, how her actors dissolve discomfort in skeptical or inexperienced audiences, and even how she makes bare-bones budgets stretch to pay for the people and things that matter, forget the rest.

“I hope people will question the usual assumptions about starting a theater. I hope existing theaters will think about how they allocate their resources. Barriers have been put up as theater becomes more institutionalized and professional, and it doesn’t have to be that way,” she said. “It can be more rewarding for audiences and for theater companies. The only people in most theaters who make a full-time salary and benefits are in administration, which is really unfair. So I am always thinking about, ‘How can I reward artists?’ I still don’t think we pay our actors enough yet.” 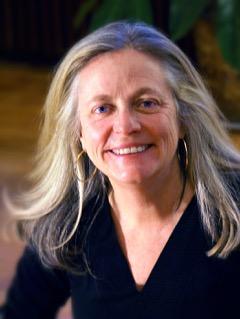 Her main goal is to reverse the trend of theater becoming a marginalized art form. She notes that the long tradition of Chautauqua, vaudeville and public Shakespeare performances has largely gone away.

“There’s a feeling among too many people now that theater is not for them. In Shakespeare’s time, everyone went to the theater. Well, women couldn’t go to the theater, but even slaves could go,” she said. “We have such a loyal and devoted following of regulars who love our theater for its intimacy and immediacy. Other theaters could capture some of that audience if they made themselves more welcoming.”

She’s largely referring to other small companies; that shiny, dark fortress on the edge of the Mississippi is going to have a much harder time democratizing.

“It’s intimidating. It’s even intimidating to me, and I’m in theater! I don’t feel welcome there,” she says. “It’s a huge barrier to people who haven’t seen theater before. Even if you find a way to make the tickets more affordable, the building is such an imposing symbol of what people feel like is a ‘code’ you have to know to go inside. How to dress, how to act. It looks like some exclusive nightclub and just seems to say ‘I don’t belong here’ to an awful lot of people. The new guard is going to struggle with that.”

By the new guard, she means the new Joe — Joseph Haj, who will replace Joe Dowling and, many hope, replace a stodgy aesthetic that is as off-putting to many audiences as is the theater building. But she has hope.

“I think Joseph Haj’s work is very much in line with the values of Ten Thousand Things, in terms of inclusion and making people feel welcome in theater by presenting something on stage they can connect with. I am optimistic.”

Ten Thousand Things’ “Forget Me Not When Far Away” opens May 10.

“This play is about a man who returns from a war after 10 years away,” says Hensley. “The play deals with long absences, and how do you receive people who have been away? As a society, how do we receive people who don’t fit in? A lot of people experience this in their families, maybe due to military service, but also as inmates, immigrants or workers.”