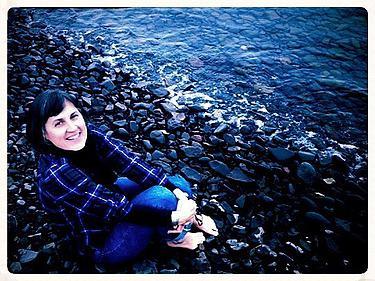 If we are shaped by our surroundings, it’s easy to see why Marlais Olmstead Brand became a storyteller. The child of a couple of antiques dealers, she grew up in a 1693 house in New Hampshire that her parents were continually restoring by hand, using historical methods and tools, uncovering centuries in the process.

“I grew up in layers of history, amid the stories of things. That really taught me to love the history of beautiful objects and the stories behind things and places,” says the Twin Cities educator and author of “The Hungry Coast: Fables of the North Shore of Minnesota” (North Star Press).

“We spent a lot of time knocking on the doors of old ladies who lived out in the woods, asking about the things in their attics. We went to the Amherst Flea Market every weekend. My brother and I would get up at an ungodly hour and roll out our sleeping bags in the back. We’d get a dozen doughnuts from Dunkin’ Donuts and my dad would tell stories as he drove. He was such a great storyteller. They were scary and weird stories and we loved them so much.”

It made a deep impression. Brand grew up determined to become a storyteller herself, and in the 1990s attended the University of Maryland’s MFA program. She published a few stories and wrote a novel, but the writing career she hoped for ended up getting sidetracked by teaching, her interest in environmental education, the arrival of twin daughters, and a move to the Midwest. Until recently, Brand was lead teacher at the Dodge Nature Center preschool; she now works with Camp Fire Minnesota.

Two years ago, Brand decided it was now or never: She needed to get back to her writing. She had kept a collection of ideas, scribbling down things and putting them away, but a trip to the North Shore with her daughters inspired a new burst of ideas.

‘Regionalism has a strong pull for me’

“We just took our time exploring the area, meandering along the shore with a stack of guidebooks and tourist stories — shipwreck tales and goofy “secrets of the North Shore”-type books, ghost stories and history books,” she says. “Regionalism has a strong pull for me, and Minnesota has such powerful regional folklore, from all kinds of historical eras and ethnic traditions. I found it all really compelling.” 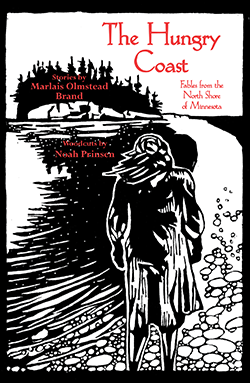 Her own collection has a timeless, folkloric sensibility. In one story, Brand takes inspiration from the tale of Angelique Mott, who nearly starved to death when she and her husband were left on Isle Royale in 1845 by copper hunters who promised to send provisions and rescue them — and then didn’t. In another story, a modern-day couple exploring the North Shore visits an old Chippewa church with a friendly but mysterious caretaker. Brand keeps an eye on history while creating new legends and characters, with Lake Superior acting as a mysterious, inscrutable and occasionally merciless guide throughout the collection.

“It wasn’t intentional, but one story connects to another, and some of them could be thought of as chapters from the same book, but really they are just connected by place,” says Brand. Underscoring that sense of place, each story is illustrated with woodcuts by Grand Marais artist Noah Prinsen.

“At times I felt uncomfortable writing about a place that wasn’t mine, or people that weren’t mine. I worried a lot about cultural appropriation, which really just filled me with dread — I worried that Louise Erdrich wouldn’t want my book in her store, for instance, and she is one of my heroes. But in the end, I felt I couldn’t write about the North Shore without writing about all the people who are part of its history.”

As she got deeper into the book, Brand talked to her father about her own family’s history, and discovered that the Norwegian branch of their family had long ago settled in Superior. Numerous other connections in both her and her husband’s family exist throughout Minnesota.

“It turned out that some things I thought were foreign to me weren’t. I couldn’t stop thinking about all these Minnesota people and places, and that lake — I feel driven to Lake Superior, because it looks like northern Maine, where I was born, and it looks like the Atlantic. In some ways, Minnesota is still a foreign land, but I’ve adopted it zealously. I feel at home.”