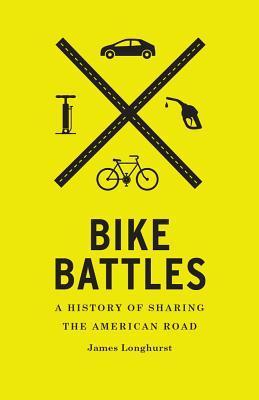 It’s probably best to avoid the comments on any article that touches on bicycles, whether we’re talking about building bike trails, bicyclist fatalities or recognition, such as the announcement last month that Minneapolis placed No. 18 on the Copenhagenize Index, a worldwide ranking of the best bike cities — the only U.S. city to achieve a spot on the list. Those comments reveal a divide between those who bike and those who don’t that is so deep, so acrimonious and so entrenched in misinformation, stereotypes and incivility that it inspired historian James Longhurst to write a book. “Bike Battles: A History of Sharing the American Road” (University of Washington Press) points out that today’s fights over the roads are nothing new; people have been arguing about bikes since the 1870s — long before the car hit the road.

“As a historian of urban and environmental policy, I study how we make decisions in a democracy that shape cities as a place to live and work. History can be a tool to help us as groups and governments look at problems and make good decisions. There’s an amazing amount of untold history involving bikes. As a historian, I’m embarrassed that other historians haven’t studied this more,” says Longhurst, an associate professor of history at University of Wisconsin-La Crosse.

Longhurst started riding a bike to work during the gasoline price spike of 2008, and quickly became a bike advocate, amateur bike mechanic and enthusiast. His book looks at the bike’s role in pop culture, public policy and infrastructure development since it hit the roads in the 19th century. Anticipating that coverage of his book would inspire a fresh volley of stale comments, we looked back at Lindsey Wallace’s “Stop Honking at Me and Support Biking Infrastructure” piece we ran earlier this month, and asked Longhurst to address some of the comments it generated — the usual comments.

There are too many bad cyclists out there who don’t follow the rules of the road.

Bikes were using roads before autos were, and before those rules were written. One of the things bikers are fighting is the misconception that roads are for cars and cars alone. In reintroducing bikes to the road, we need to take another look at the rules. The road is a commons that accepts all users. In the 19th century, roads had different users traveling at different speeds. People were on horseback, using sleds, surreys, trolleys, and there were many more pedestrians. There were different weights, sizes and motivations, and they all got to use the public road. In the 20th century, it was dominated by one user. Now we are returning to a multi-use commons. This isn’t about bike vs. car; in the future, we’ll have different needs and modes that we can’t predict. So it’s best to design for all users.

In Western Wisconsin, Amish farmers use the road too, and their horse-drawn vehicles are legal vehicles. You can see the marks their horses leave in the asphalt on roads that were originally built for horses and bicycles.

In Minneapolis, raising the speed limit to 15 mph on trails would get a good percentage of bikes off the road and onto the trails.

One of the depressing things about being a historian is seeing the same argument being made over and over again. Users of different speeds threaten one another. In the 1890s, there was a great public concern over bicyclists who went too fast. I don’t have a solution. I do have tremendous admiration for the Grand Rounds bike trails in Minneapolis. That’s partially a legacy of the side path. Other cities paved over their side paths, but Minneapolis kept them, and today they form the backbone of a world-class bike trail network. So Minneapolis was forward-looking on that one, and complaining about it is sort of like complaining about your diamond shoes being too tight.

So many drivers see red every time they see a cyclist. These folks are scary. But there IS a small subset of cyclists who have a loud mouth, give the finger to motorists, and generally act to heighten conflict.

This is the sort of thing I like, as a historian of public policy. Conflict is a great way to see assumptions that are otherwise hidden. I wouldn’t have been so interested in writing this book if there wasn’t conflict. So, we have had multiple opportunities to redesign our infrastructure to serve multiple users. And we haven’t. Basically, bicyclists are seen as individuals. When we see bad behavior from motorists, it’s generalized: That Honda Civic is driving badly. When we see a bicyclist biking badly, it’s that guy with a beard. It’s easily to vilify an individual. Their bad behavior stands out more than that of a generalized auto driver’s. 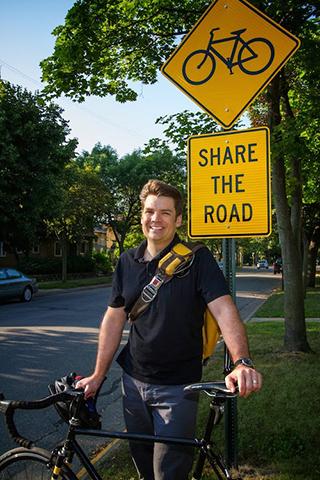 Bikes can and should ride on sidewalks.

Should I answer as an advocate or a historian? Historian! Sidewalks have a particular history, not as a piece of infrastructure for cyclists. They were designed to get walkers off the dirty, muddy, manure-filled streets. The question of whether bicyclists can legally be on the sidewalks, well, bikes are a legal vehicle, which means they have a right to be on the road and in most cases belong on the road. The courts have decided that bikes are vehicles, yet the roads increasingly get designed in ways that don’t work for bikes.

Starting in the 20th century, roads were built with a continuous edge. Then the Americans With Disabilities Act said you had to add curb cuts with ramps to make it possible for people in wheelchairs to get onto sidewalks. These very inviting ramps make it easy and more attractive for bicyclists to get onto sidewalks. But pedestrians don’t want bikes on the sidewalks. So I’ll end with an advocate’s statement. Sidewalks are for sidewalking. The sidepaths of the 1890s were ideal for bikes, but unfortunately, there’s no time machine to go back and save or add those. So we need to find ways to make biking on the road safer.

Cyclists come off as entitled because they’ve chosen a politically correct mode of transportation.

Currently, the term “politically correct” has an environmental association, I’m assuming. This is actually quite recent, since the oil crisis of the 1970s. After that, bikes became associated with childhood, as a mode of recreation rather than transportation. But before these eras, bicyclists were associated with patriotism and patriotic sacrifice, which itself is a forgotten notion. During World War II, people rode bikes to save resources for the war. How did we get to the point where the most patriotic vehicle is the one that consumes the most fuel and energy? I just have to marvel at that. It’s a very strange and historically unlikely outcome.

The assumption that the bike is the choice of snotty elite doesn’t represent the reality. All kinds of people ride bikes for all kinds of reasons. Some are trying to improve their health, or because their health issues preclude driving, or to save money, or they don’t have a car, due to finances or age or choice or a DUI. Others are trying to avoid the costs of sitting in traffic. The auto has been “normalized” and somehow cars represent “everyone” while anything else is seen as “abnormal.” We need to avoid making a cultural description from a group of stereotypes and employing it as part of political debate, because ultimately that doesn’t serve anyone. Stereotypes don’t represent the whole biking public. Not all bicyclists are guys with beards.

The auto has never paid its own way on the road. Not even close. Roads are a vast, subsidized public expense, and they should be used by the entire public, and that includes bikes. The gas tax only covers a small portion of the expense of building and maintaining roads. Income tax and sales tax are also part of the picture. This comes up in all kinds of discussions of public resources, such as public schools, not just the roads. People love to point fingers and say everyone benefits at the expense of others.

This is a shockingly uninformed cultural belief that has nothing to do with fact. The public pays for the public roads. Even if you are immobile, you pay for the resources used by others. Also, bikes do far less damage than cars to the road resource. Small tires and light vehicles cost taxpayers less than large heavy vehicles in terms of road repairs. Bicyclists are already taxpayers. Many of them also own cars.

Putting on my historian hat one more time, I’ll say that economics will shape our cities’ streets more than anyone’s advocacy efforts will. The economics of car-centric cities are a disaster. A terrifying amount of money is spent every year building more miles of roads, more lanes, more parking spots and then repairing and rebuilding them. Economics will not be able to support this enormous, constant drain. Right now, Wisconsin is in a huge budget hole. The only thing they borrow for is highway building, billions of dollars. That will ultimately cost us all. We’re in dire straits.

New book looks at bike battles, past and present