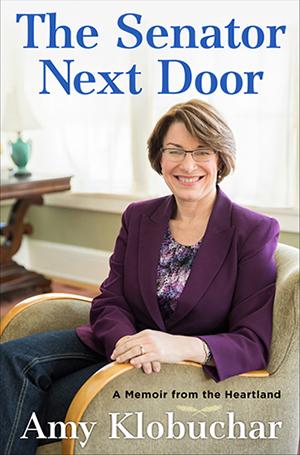 A midcareer senator publishing a political memoir as the 2016 presidential race takes shape can’t be viewed as a casual move, especially if that senator is Amy Klobuchar, who has long been viewed as having Cabinet, judicial or vice-presidential ambitions — or perhaps something higher. But it’s also State Fair season, and perhaps our senator just wants to get closer to her constituents by sharing some of her experiences as a nice, neighborly politician whose career has been low on drama while moving steadily forward, one win at a time.

Her new book, “The Senator Next Door” (Henry Holt) recounts growing up in Plymouth, Minn., doing well in school, marrying a nice guy, winning elections pretty easily and getting along pretty well with just about everybody. Of course, there were rough patches, but Klobuchar is super skilled at finding the silver lining. Her father [former StarTribune columnist and MinnPost contributor Jim Klobuchar] struggled with alcohol addiction, and one day young Amy found the word “drunk” scrawled on her locker at school; as an adult, she accompanied her reformed dad on epic bike rides that helped her get to know Minnesota’s scenic beauty. When she became a parent herself, insurance company rules dictated that she leave the hospital posthaste after a difficult delivery, while her fragile newborn stayed behind in intensive care; that experience helped her pass legislation expanding maternity coverage to 48 hours.

Klobuchar’s book centers on the people who shaped her politics. Immigrant grandparents, Range mining relatives and a mother who taught elementary school gave her a traditional DFL mindset, but she also recounts solid friendships with Republican colleagues, doesn’t criticize even her opponents and occasionally votes with them. Perhaps this is the key to her steady success. “The Senator Next Door” is a guide to getting ahead by getting along.

MinnPost: Most political biographies are ghostwritten, but you say this one is “all me.” Tell me about your writing process and timeline.

Amy Klobuchar: I worked on this over a couple of years. I used an iPad so I could work on it wherever I happened to be — on a plane, in an airport lounge, at my kitchen table. I wrote a lot back in my college days, so I’ve always enjoyed writing, something I still do a lot of as a U.S. senator. I wrote my first book, “Uncovering the Dome,” about the 10-year political struggle behind the building of the Hubert H. Humphrey Metrodome, back in the early 1980s as a college senior. I figured that since the subject of my first book was being torn down, it was time to write a new one! This book is intended to make an impact on our politics, to show that good governance is about being neighborly, and that regular people can — and should — get into politics.

MP: You look back on your life with a level of detail most people wouldn’t be able to access. How did you piece together your own past, and what was the research like?

AK: As a senator, I haven’t had time to keep a daily journal. I tried doing that the very first week I was in Washington, D.C., but it’s a demanding job so I found that wasn’t practical for me. I did write down some of the stories from time to time. But most of all, I have told a lot of the stories over the years, and I have a pretty good memory. I called a lot of old friends and neighbors, from my high school prom date to my college roommates to my across-the-street neighbor growing up.

My husband [John Bessler] assisted me by checking my memories on the Internet and in old newspaper clippings, as well as in my dad’s writings. I think John took just a little joy every time I was a bit off! The research on my grandparents came in part from immigration records that you can order off the Homeland Security Department website.

MP: What influence did your father have on your writing?

AK: My dad had a huge influence on me. I grew up watching him write on his old Underwood typewriter, and I’ve always loved his writing — how energetic and accessible it is, and how much humanity he’s able to express in it. In going on long-distance bike rides with my dad, including on several of his multiday “Jaunt with Jim” rides, he gave me a real love for Minnesota’s natural beauty. And in seeing what an impact his newspaper columns had on the people of our state, he’s been a true inspiration to me — and I know to many others. A few years ago, my dad wrote a book titled “Heroes Among Us.” My dad is my hero.

MP: You discuss his problems with alcohol (and marriage) in some detail. What was it like for you — and for him — to revisit this part of your history?

AK: These are definitely difficult subjects to write about, but unlike some, my dad has already written a lot about his divorce from my mom and his own struggles with alcohol. When my mom and dad got divorced, my dad wrote a whole column titled “Four Days Short of an Anniversary.” And after getting a DWI in 1993 and going through treatment, my dad — who is now happily remarried and enjoying life at age 87 — wrote a wonderful book, “Pursued by Grace: A Newspaperman’s Own Story of Spiritual Recovery.” I highly recommend it for anyone struggling with alcohol addiction or — for that matter — any other form of substance abuse.

MP: What other political memoirs do you admire?

AK: One of my favorite autobiographies is Katharine Graham’s “Personal History.” She wasn’t a politician, but she wrote a really candid memoir about growing up and later being the owner of the Washington Post. I liked the candor and honesty of that book. I’ve also long admired Nora Ephron’s books, and for political biographies, David McCullough’s books — “John Adams” and “Truman” — are hard to beat.

MP: You point out, a few times, that your parents were both conceived before marriage (in the 1920s). This certainly wasn’t uncommon, but I wondered what comment you were trying to make about that era’s perception of morality vs. reality.

AK: I certainly wasn’t intending to wade into the 1920s “culture wars” — if there was such a thing back then. I just found it interesting when I uncovered that little nugget. When you delve into family history, it seems, there’s always a few things that never seen to get mentioned in one’s childhood.

MP: When you write about the effort to expand insurance coverage for new mothers, you say that the legislation passed in part because the testimony was “so embarrassing” to male legislators. In recent years, female bodies are a big topic in legislatures. How have conditions changed for women in politics in the past 20 years?

AK: They’ve changed a lot. When I was born in May 1960, Margaret Chase Smith — who served as a U.S. senator from Maine — was the only woman in the U.S. Senate. And she’d actually first gotten into politics after filling the U.S. House seat of her husband after he died. Today, there are 20 women serving in the U.S. Senate. Also, more and more women are deciding to run for office, whether it’s at the local, state or federal level. There’s still a lot of progress to be made, but there’s definitely strength in numbers. Having more women in leadership positions is important and a welcome change.

MP: During the 2006 senate race, Mark Kennedy ran a series of negative ads that elicited a backlash — you say that Minnesotans became “disenchanted with negative ads.” Do you think we’re a more civil state when it comes to political discourse?

AK: I do. There’s something special about Minnesota. We have high voter turnout, a highly educated work force, and people pay close attention to what’s going on throughout the state. I think grassroots politics still works a lot better here than negative ads. Minnesotans also have a tradition of coming together after elections and moving on. Congressman Kennedy, the book points out, also ran some very lighthearted ads about growing up with his brothers and meeting his wife at a 4-H booth at the State Fair. Mark is now doing terrific work as the chair of the nonpartisan Economic Club of Minnesota in addition to heading up George Washington University’s Graduate School of Political Management.

AK: I don’t like labels because I think they oversimplify the complexity of politics. I am proud to be a Democrat, but no person or party has a monopoly on good ideas. I enjoy working with people of both parties, and in the Senate, where you typically need 60 votes to get anything done, working together is an absolute necessity. More than anything else, I’d say I’m pragmatic because when I see a problem, I like to try to solve it. I think the success I’ve had in passing legislation over the past nine years is a reflection of that approach.

MP: Releasing a biography in advance of Iowa could be interpreted as the beginning of a new campaign. What role are you aiming for next?

AK: I called “The Senator Next Door” the “The Senator Next Door” for a reason. I love my job, and I love representing the people of our state. I see my job as working on behalf of my constituents. As I say in the book, they are my “guardian angels” because they daily inspire me, give me new ideas and I steadfastly believe that citizen advocacy still matters and can make a difference in people’s lives.