The publishing world is continually bemoaning the destruction of our attention spans and dwindling appetite for books, and it’s possible to lay the blame squarely upon one particular snippet of the Internet world: cat videos.

But the editors at Coffee House Press believe that it’s possible to laugh at someone else’s cat — who is doing the same annoying things our own cat does — and also sit down with a book that deconstructs our appreciation of cats and cat videos. “Cat Is Art Spelled Wrong” is a collection of essays that not just tries to make sense of our fascination with the inane and cute, but makes the case that cat videos are a form of art.

“The project originated at the first catvidfest. Coffee House had gone as a staff, not expecting more than a nice evening, but by the time we left, [publisher] Chris Fischbach and I knew there had to be a project in there for us. It was so magical,” says Caroline Casey, one of the editors who helped herd 14 writers to expound on cat videos.

Those who attended Wednesday’s sold-out 4th annual Internet Cat Video Festival might agree. A giant green Heart of the Beast cat puppet chased by mice floated around the outfield at CHS Field, fans met with Internet-famous cat videographers, Barb Abney blasted songs about cats, painters sold cat art and the human spectacle — well, there were 13,000 cat people there, and you could tell.

Cat haters need not stop reading here, because “Cat Is Art” also includes contributions by, not cat haters exactly, but cat ambivalents. Most noteworthy among them is David Carr, who starts out by saying, “I don’t hate all cats. I like one cat.”

“The David Carr essay came about because he’s from Minneapolis, and he had covered the first catvidfest for the New York Times,” said Casey. “We knew he’d be reliably smart, funny and contrary. And he didn’t disappoint. The essay is, as far as I know, the first of his work to come out since his death. And we’re really so proud to have him in the book, and that his widow, Jill Rooney Carr, loves it too.” 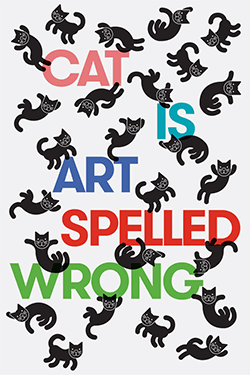 Other writers in the collection include Matthea Harvey, Alexis Madrigal, Ander Monson and Will Braden, who spoke at Wednesday’s event to a crowd who would rather have seen his artistically morose cat, Henri le Chat, onstage; when Henri’s 10th video screened, a thrill ran through the crowd. A mix of arts writers, poets, essayists and fiction writers is interspersed with cat video insiders like Kevin Nguyen, who began his career with “I Can Has Cheezburger” [sic] and reveals it to be a low-paying, soulless content farm, the dark underbelly of a site designed to make people laugh (or to sell advertising).

“Cat videos are interesting on so many levels, so there had to be essays that approached the subject from a lot of different vantage points. And we worked really hard to make sure that even the more academically inclined essays weren’t going to be inaccessible to a smart, interested reader. There’s nothing in the book that the average New Yorker subscriber couldn’t manage, and that was the goal.”

In other words, Coffee House isn’t too worried that book lovers will devolve into YouTube zombies, endlessly watching cats fall off tables and wake up humans and bop each other. We might want to sometimes read about cats, too.

“Anything that engages this many people is worth talking about, and it’s part of our mission as a publisher to create all kinds of literary experiences — the thrust of our Books in Action programming is to create off-the-page ways for people to interact with literature,” said Casey. “Why not take an online, 100 percent not literary phenomenon and give it a book?”

With new book, Minneapolis publisher makes the case that cat videos are a form of, yes, art