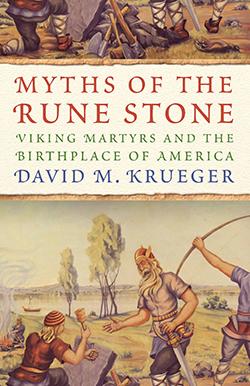 In 1898, a Swedish farmer in the Alexandria area unearthed a stone tablet with an inscription — written in a mix of Swedish, Norwegian and English, in runic letters — describing the arrival upon the future land of Minnesota, and the subsequent massacre of 10 of its men, presumably at the hands of native warriors. The tablet was quickly determined to be a hoax perpetrated by Olof Ohmon (who just happened to have several books of Nordic lore and history, including some featuring runic language) and his neighbors. But first, it toured the country, spent some time at the Smithsonian and enjoyed the attentions of tourists and scholars, before returning to Alexandria, where it now resides at the Runestone Museum.

Its influence didn’t end there. In his book, “Myths of the Rune Stone,” David M. Krueger examines the role the rune stone played in the formation of a Minnesotan cultural identity, and helped reinforce ethnic and religious dominance in the United States. Krueger, who grew up on another farm in the Alexandria area, now lives in Philadelphia, where he works as an adjunct professor and deacon, produces podcasts for MRB’s First Impressions program, and conducts tours of historical and religious sites in the city.

MinnPost: You grew up in Alexandria. How long have you been interested in the rune stone?

David Krueger: It was just always there. I grew up under the towering figure of Big Ole, and Norse culture was just kind of in the water out there. Everyone talked about it. My interest really piqued when my father showed me the deed to the land the farm was on, dating back to 1867. The first owner was a man named John Beaver. It got me thinking about him, and to the fact that there were other people who lived here — the native population — that we never talked about. All we heard about was the Vikings, who allegedly visited, but not the millions of people who actually lived here.

MP: That wasn’t part of your education?

DK: Not really. Maybe that has changed since I was a student in the 1970s. I suppose we learned about the Indians, but it never felt concrete, or local. There were no native people in the area. It was something viewed as being a part of the distant past, despite the fact that it wasn’t that long ago. I was always struck by what wasn’t talked about. That’s part of the way I’ve always been. I’ve always asked questions and questioned the status quo. After school, I moved to inner-city Philadelphia, and that was a very formative experience. It made me realize that America had not fulfilled its promise to so many.

MP: How does that connect to the rune stone?

DK: We hold up the dream without seeing the reality. I think there’s a lingering anxiety in America about the fact that our success and prosperity came at the cost of destruction. The rune stone’s story brings white people to the continent much earlier, and thus gives them a deeper claim to the land. If we can prove white people were here before Columbus, then we can render the Native American people invisible. There are a number of people who are quite obsessed with that idea. The TV program “America Unearthed” follows Scott Wolter around the country where people are digging up various artifacts that supposedly show white people were here before Columbus. 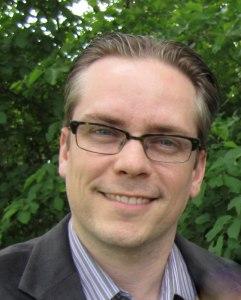 MP: So this didn’t end with the rune stone.

DK: No, and in fact, the rune stone has been enjoying a resurgence in the last 10 years. There is a new generation of enthusiasts trying to trump up a case for authenticity, but their claims are pretty weak. Bad science, flimsy evidence, and pseudo-science are themselves an American tradition, though. We have a very low level of scientific literacy in this country, and many people are unable to tell the difference between myth, folklore and reality. At talks I’ve given, some people have become very distraught at the very suggestion that it’s not authentic. People are so taken with the story that the object itself almost becomes irrelevant. Like when Joseph Smith said that God gave him gold tablets that said America was visited by Jesus and populated by a lost tribe of Israel — the story is very appealing to some people, whether or not it’s plausible.

MP: Aside from authenticity, you write about the ways in which the rune stone had a profound impact on Minnesota’s cultural and religious identity. Would we have a different state without it?

DK: No, I don’t think it influenced Minnesota’s culture so much as revealed what was already there, and helped promote it. I remember when I was growing up, it was part of a general ethnic pride for descendants of Scandinavians. It helped put us on the map. There was regional tension caused by the idea that America begins in the East Coast, whether in Boston or Philadelphia, and the Midwest felt cut out by the cultural hegemony of the East Coast cities. The rune stone puts Minnesota into the origin story.

MP: You conduct history tours in Philadelphia. If you did the same thing in Minnesota, what would be on your tour?

DK: I would love to do a tour of the Dakota War sites. There are many pioneer monuments for that war. I would visit Native American historical sites. I’d stop at the state Capitol building and look at the artwork there. “The Treaty of Traverse des Sioux” [by Frank B. Mayer] depicts a negotiation in which Dakota chiefs are shown handing over their lands in a meeting of equals. In reality, they had no choice. I’d also like to include some German-Catholic sites. The rune stone was an important symbol for that community as well. The Hjemkomst Center in Moorhead would be on my list too.

MP: Have other hoaxes been as successful as the rune stone?

DK: Well, I wouldn’t say this was a huge success; Ohmon never made money from it, and in fact his family suffered a great deal of ridicule. [Two of Ohmon’s children ultimately committed suicide.] There have been other rune stones. One that got a lot of attention was in Oklahoma. The Cardiff Giant, a huge stone figure of a man, was created by a man in New York. Genesis 6:4 says that giants once roamed the earth, so this is a fraud of biblical proportions. Thousands of people came to see it; he made a great deal of money before he was discredited. But people were attracted to an idea that connected the United States to the Bible. There is something so compelling about the idea that you could dig up an artifact that changes the course of American history, or rewrites its past. It’s a very tantalizing idea and so ingrained in our society. But so far, it’s just a lot of historical revisionism. We would do better to look at the things that really happened in our past.