“Kitchens of the Great Midwest” is one of those books that isn’t quite what it appears to be. The cover features a couple framed by pretty illustrations of regional produce, and it calls to mind the somewhat similar design of Peter Mayle’s “A Year in Provence.” That, and a title that could be interpreted as ever-so-faintly snarky, might lead you to believe that J. Ryan Stradal has written a book about fancy food in an un-fancy place, or perhaps fancy people eating not-so-fancy food and making fun of it. Instead, he’s written a very sincere novel about regular people who know a good thing when they taste it.

Eva Thorvald, the central character of his novel, has a “once in a lifetime palate.” As a teenager in the 1980s, she tends an indoor pepper farm. As an adult, she cooks food so exquisite people that people weep over their plates. Stradal writes with authority about heirloom tomatoes, just-picked corn, walleye and the kind of dessert bars people used to make for church bazaars. He writes knowingly about Minnesota’s food traditions, and his characters fall on both sides of the fine line between insufferable foodies and those who appreciate a good meal. Through Eva’s relationships, he points out that food isn’t — as we so often hear — love, and also, we actually aren’t what we eat. Some of us are spoiled. Some of us are deprived. Sometimes cooking just comes down to hard work and chemistry.

Stradal grew up in Hastings, Minnesota, and has spent most of the past two decades in Los Angeles, where he has helped create television programs such as “Ice Road Truckers,” “Storage Wars” and “The Deadliest Catch.” He also edits the fiction section of The Nervous Breakdown, has written numerous short stories, and has been nominated for a Pushcart Prize. He’s been writing toward, and around, this book for a long time, and his previous writing expands on characters and themes that come to fruition in the novel. Check out “Early Girl” to see an “outtake” chapter from the book.

MinnPost: You haven’t lived in the Midwest for a long time. Did you have to do research to reacquaint yourself with your hometown?

JRS: I actually have never felt like a Los Angeleno. I consider myself a Midwesterner at heart, and I visit several times a year. My family is still there, and friends, and I just feel more attuned to a Midwestern sensibility. I did have to do a little research, but it was more detail-specific stuff. Like, I went to the St. Paul farmers market. I wanted to see for myself what was in season, take in the layout, see what people were like there. It was wonderful. My girlfriend was totally won over by St. Paul. On the less pleasant side of things, I bought some lutefisk. I hadn’t bought it since I was a kid. I knew I could find it at Reissner’s in Hastings. I don’t know how common it is to find it elsewhere. My family tradition is actually picked herring.

MP: How well did you know the restaurant scene?

JRS: That’s been part of my life since long before this book. In high school, I wanted to travel. I couldn’t afford to actually travel, but I could drive up to the cities and go to restaurants. So I treated food as a placeholder for travel. In every case, the Minnesota version was my first experience and exposure to world cuisines. Eventually, I did get to travel, but it really still centers on the culinary experience.

I also have friends who are chefs, and I learned a ton from them. I’m endlessly intrigued by the attention to detail chefs pursue. Gluten-free, vegan, dairy-free has really complicated what’s already alchemy. This whole realm, this moment we’re in as eaters and consumers, has really changed the work of the chef.

JRS: Yeah. I didn’t always have a good understanding of what the costs would be. One time I was at a restaurant and didn’t actually didn’t have enough money to pay the bill. I had a part-time Sam Goody salary, which didn’t pay much. Amazingly, they just said fine, send us the difference. That was a sobering experience. I poorly estimated my resources and didn’t have a credit card. I did work for a time at the Steamboat Inn — as a janitor — which is in the book, and was a real place, and I get Faegre’s, Goodfellows, The New French and all these high-echelon eateries I remember into the book. I wanted to place the narrative in a timeline of Minnesota restaurants.

MP: But this book isn’t set in those kinds of places. In fact, most of it takes place in more blue-collar settings.

JRS: I think it’s an important distinction. The Minnesota I knew wasn’t actually this place full of high-end restaurants and gourmet food. My family didn’t eat out often. That’s something that I really wanted to write about. My dad was unemployed for parts of my childhood, and my mom was a waitress at Perkins. We experienced the kinds of privations that are pretty normal for a lot of people, and that certainly affected how we ate. You try to eat as well as you can, of course, but it does cost money to eat well. Cheap food tends to be highly processed and pretty bad for you. Society has gotten better informed about this, but for a long time there wasn’t the awareness and the emphasis on healthy eating that there is today.

MP: Is that why Eva eats mac and cheese for dinner after she’s just prepared a $5,000-a plate dinner?

JRS: I knew a chef like that, who would make the most exquisite meals, then go home and serve himself mac and cheese and a beer. Comfort food is important to everyone. When Eva is making her dad dinner, she’s making a rosemary beef stew that I found online with a bunch of recipes for dinner for under $2. The home economics of her life have to be reconciled with her desires and needs, and health care costs and reality. She endeavors to make her dad’s life better, and eventually she makes her own life better and has money, but that cheap meal still has importance and meaning for her. 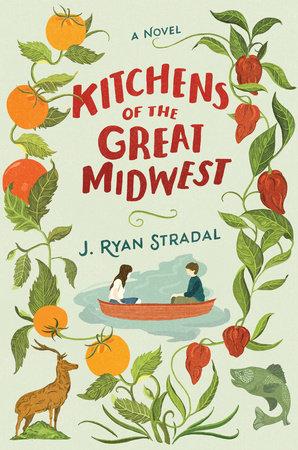 MP: Your book was just optioned for film. How do you feel about that?

JRS: Whoa! Whoa, that just happened, and I didn’t realize the news was out there. I’m really still trying to wrap my head around that myself.

MP: But … you work in the entertainment industry. Wasn’t this a possibility you considered as you worked on the book?

JRS: No! Not at all. I wanted to write a novel. This project was intended to be entirely different than my other work. I never in a million years considered it being on screen — although of course, I’m very excited about it being a possibility now. But it’s only an 18-month option, so anything could happen.

MP: You seem very protective of Eva and your characters, and I wonder if you’re worried about how they might be portrayed, particularly in terms of class.

JRS: Yes. I did my best to create two-dimensional characters, but class isn’t often handled well in the movies. Jordy, for instance. One person who read it said, “Jordy is the most sensitive rendering of a redneck I’ve ever seen.” And I was shocked — I didn’t think of him as a redneck at all. He was just representative of a certain kind of Minnesotan I grew up with. Just about everyone in my family are deer hunters, for instance, and I just tried to get a person like that into the story in a way that felt natural to me. We see a lot of unfortunate cultural shorthand for rural people in renderings that don’t tell the whole story.

MP: So how does your TV background inform your writing?

JRS: Well, I’m a little older than your typical debut novelist, and I don’t have an MFA, like it almost seems like you have to these days, to sell a book. But I do have all this storytelling experience that helps me create a sense of narrative: This happened, and then this happened and then this happened. Days and weeks and years go by. The reader gets caught up and carried along. I think a lot of writers don’t have that instinct, but working for television and film was great training for me. But seriously, if I wanted to write a movie, I’d have written a screenplay. I wanted to write a novel.