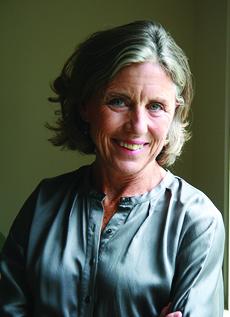 As far as memoirs go, Beth Dooley’s new “In Winter’s Kitchen” (Milkweed Editions) is not particularly telling. She grew up on the East Coast, moved here with her husband, and immediately immersed herself in Minnesota food, becoming a fixture on Twin Cities’ television and radio. She’s written cookbooks with some the Twin Cities’ most storied chefs, but she engages in no back-of-the-house gossip or even much self-examination. The focus is almost all on the food.

“Actually, this is much more memoir than I intended! My editors kept asking me to put in more stories about myself: ‘We want to hear more about you, not a farmer’s market cheesemaker!’ But throughout my life, I have met the most interesting people and I really wanted to tell their stories and talk about the amazing food they bring us.”

If it’s true that we are what we eat, the underlying story Dooley does tell about herself is that she’s finally become, through eating and cooking local foods, at peace with her adopted hometown. She reveals a little hesitation about embracing this place, with its long darkness and enduring cold. She hints that she finds this season difficult, and it’s understandable that a chef and food writer would long for somewhere with an extended growing season. But as she writes about cooking with wild rice, Minnesota apples and Wisconsin cranberries, and watching her sons playing hockey on Lake of the Isles, Dooley expresses a deep affection for all of it, finding goodness even in coldness.

Eating local in winter — even here

“I found it astounding that you can eat so well in winter in Minnesota. So many people dismiss the idea that you can eat local in Minnesota during the winter months, but I actually find it’s very easy to do so, you just need to be thoughtful about it. The change in the season forces you to slow down and pay attention to what’s present at that time, and let go of the idea of what isn’t available. So much is available. The more deeply I got to know the food that grows here, and the people who grow it, the more this place felt like my own home.”

Dooley’s love for cooking began at her grandmother’s side, and her cooking and need to connect with farmers comes from the Victory Garden generation. Her grandmother was a housewife during World War II and she gardened, cooked, raised bees and canned. “I would work alongside her and learn all these things. We’d stop at farm stands together and I loved listening to her talk with the growers. I was a fly on the wall,” she said. “People don’t think of it that way anymore, but New Jersey is called the Garden State for a reason. Then all of sudden, all in one year, those rich farms were sold to developers and turned into strip malls. No more tomatoes and sweet corn. I missed them so much. So when I moved here, it was so amazing to visit the farmers markets. It was like revisiting my childhood.”

In the late 1970s, Dooley arrived in Minnesota just in time to catch the beginning of a renewed interested in her grandmother’s lost arts as well as a growing awareness about the problems with modern food production. In this memoir, she spends time at a heritage apple orchard and heralds the return of the chestnut tree. She recounts the battle between the Koch brothers and a small organic farm that is growing sweet corn the way it used to taste, before ethanol and GMOs changed that crop. She explores the impact of hybridized wheat on human health. She worries about the loss of diversification and the potential for catastrophic crop collapse. She looks for hope in the fields tended by Hmong farmers, the seeds being saved by those who remember the flavors of the past and the chefs who are helping keep small Midwestern farmers growing traditional Midwestern crops.

“Lucia Watson was a big influence. We became friends through “Savoring the Seasons of the Northern Heartland” [a cookbook Dooley and Watson coauthored]. She was the first chef to commit to buying local. In order to make it viable, she had to be loyal to farmers. She knew there were a lot of good ingredients growing not far from her stove, so why import other things? She showed us that there is a truly local cuisine that depends on our own unique food heritage.” 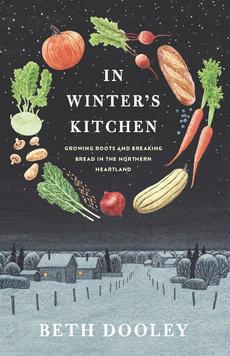 Dooley wants people be able to cook this way at home, so her cookbooks focus on simple preparations. She’s forever experimenting, looking for new ways to prepare local ingredients, and sharing those recipes via her blog, books and local publications. The seasons guide her, so this is what her kitchen looks like this month:

“There’s a whole line of different squashes on the counter that I am trying to figure out what to do with. There’s a torpedo squash, a Native American bitter squash, a Cinderella pumpkin and whole bunch of others. I look at it like a scientist, comparing and testing. I look to other authors to see how they put things together. There is a lot of knowledge passed down through other people. I don’t have any special skills or wisdom, I just pay close attention,” she said.

And then she shares. “In Winter’s Kitchen” concludes with recipes that feature winter storage crops like potatoes and wild rice, canned produce and seasonal foods like turkey and cranberries. It’s tasty and versatile enough to get us through till spring, when the farmers markets open again.

In Beth Dooley’s memoir, the focus is on food