The first gay couple to get married in Minnesota are once again fighting for their legal rights, almost three years after the state legalized gay marriage, a year after the U.S. made the same move — and almost 45 years after they legally married here. The problem? Blue Earth County never recorded the marriage license it issued the couple in 1971.

When Jack Baker asked Michael McConnell to marry him in the late 1960s, McConnell agreed — so long as it would be legal. “That was the way it was done in my family,” he said. “We had longevity in love. Once you made that commitment, you expected it to last.” So Baker, determined to make good on his promise, went to law school and studied the marriage statutes, and found that gender was never specified. No gay couple had ever married, but there was nothing that said they couldn’t. So they did.

First, they applied for a marriage license in Hennepin County as Michael and Jack, and were rejected. So Michael legally adopted Jack, enabling him to change his name to the gender-neutral Pat, and their application for marriage was accepted in Blue Earth County. After their marriage ceremony, they sent the paperwork in, and went on to enjoy the rest of their lives together — give or take a few other legal battles, such as Jack’s military discharge and Michael’s fight with the U of M over a job it offered him and then withdrew when his relationship with Jack — then student body president — was discovered.

They didn’t discover that the county never recorded their marriage until after they gathered their papers to write “The Wedding Heard ’Round the World: America’s First Gay Marriage” [University of Minnesota Press] with Gail Langer Karwoski, the biography of their love story, complete with legal struggles. Today, they are in a legal limbo, unable to claim Social Security survivor benefits and unable to marry another — or remarry each other, under current law — because their original license still stands, although unrecorded. As of this time, Blue Earth County refuses to record the marriage license it issued.

MinnPost: After writing this book, you donated a massive archive about your life and Minnesota gay history to the University of Minnesota. What did you find when reviewing all that material?

Michael McConnell: It was unbelievable. We were transported back to that time. A lot of it was painful, heartbreaking; so many people lived in fear and guilt. Many people felt they could not come out to their families. We’d get letters from people who were so lonely, so isolated. “I live in a small town in Georgia, and I worry that I will never find someone.” So much has changed, yet it’s important that future generations understand what life was like. We wrote this book with Gail because she has written many books for young adults, and we wanted to reach that audience, and show them that it is possible to find love, even when there are obstacles.

MP: You were both out during a time when many people were not, and Michael, your family in particular was very supportive. Yet you describe your church and community as full of people who would “gleefully murder” you.

MM: The culture in Oklahoma [where both men grew up] is a mix of Southern hospitality and generosity, tempered with a real meanness. Everyone is sweet, loving and kind. But there’s this sense of backstabbing, meanness under the sugary surface: “Why precious, I love you to death. But you do have stinky breath.” It is hard to know who to trust. It was clear in the sermons we heard about Sodom and Gomorrah that we were less than welcome.

My family was very religious, but interpreted that as based in love. Jesus was not about hatred, judgment or criticism. They accepted us as a couple just as they did every one of my siblings’ spouses. We were just ‘Michael and Jack,’ and my mother called him her other son.

MP: Harassment by law enforcement is a re-occurring issue in your story and for the gay community in those years. How has this changed?

Jack Baker: The police in Oklahoma took great pleasure in parading people in front of the cameras and shaming them, trying to destroy their lives. This was widely supported by the local governments. But when we moved to Minneapolis, it was better. The police were not our friends, but they had been told by local politicians not to be offensive.

There were periods of time when police would harass gay people here, though. Back in the days when “The Rocky Horror Picture Show” played every weekend in Uptown, and people would leave the theater late at night in costumes, police would try to bust people, make life difficult. But they wouldn’t generally go to great lengths to ruin your life —expose you to your family, get you fired — which was happening in other parts of the country.

MM: Young people today don’t really understand the degree to which police wanted to keep gay people fearful. If we lived in fear of getting busted by police, we wouldn’t stand up for our rights. Of course, they made a mistake by busting Jack; he wanted to change the world. 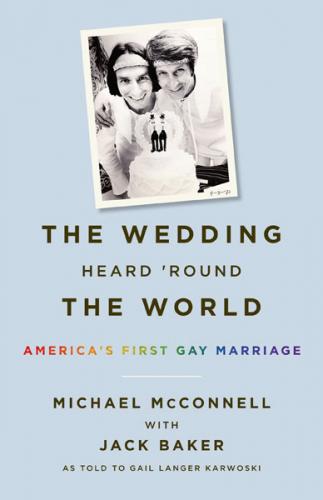 MP: You two began your quest to get married in your early 20s. Today, that’s fairly young to seek marriage.

MM: Yes, it was very common to go straight from college to marriage. And I had been in a previous four-year relationship that helped me understand that I really wanted to be in a stable, permanent relationship. When Jack proposed to me in 1967, I had given a lot of thought to relationships in general. Gays had a hard time in a lot of cases, because it wasn’t supported by the culture.

JB: The problem was, no one had done it before. So it was hard for people to understand it could be done. When we set out to get married, the dean of the law school was quite upset with me. He said, “You’re in law school, you should have known what’s intended by the law.” My reaction was, I was in law school, and the first thing they teach you is that what is not prohibited is permitted. And that we were entitled to equal protection under the law.

MP: After you found a way to marry, did other states move to prevent others from doing so?

JB: Yes, 90 percent of states used the same language Minnesota did, so it would have been possible for other same-sex couples to marry at that time. After we did, they went back and changed marriage statutes around the country so that no one would be able to do what we did.

MP: How did the gay community react to your marriage?

MM: During those times, gay people were fearful, and so many of them were upset with us. They were talking about sexual freedom, freedom to go to a gay bar without getting busted by police, or freedom from losing their jobs or apartment. We were talking about love and relationships and family.  Some thought we were asking for too much and others thought we were asking for something they didn’t want.

MP: After “Look” magazine ran a profile of you two, you received thousands of letters. Was this the equivalent of reading the comments section? Was it frightening to open those letters?

MM: No, we enjoyed it! We read every one, and the more we opened, the more positive they got. There were many from teenagers who were asking, “How do I find my own Mr. or Mrs. Right?” There were a fair share of hateful, militant Christians, “God is going to get you,” that kind of thing. But most of the mail was thanking us for coming out and showing the world a positive gay relationship. So much of the media focused on gay people as deviants, child molesters, or only looking for sex, not lasting relationships. So people were happy to finally see a gay couple shown in a normal, positive light.

MP: You have a complicated relationship with the University of Minnesota. Why did you give them your papers?

JB: We knew the archives related to our activist work and our relationship had historic value. Mike wanted it to go to the History Center and I wanted it to go to the [Jean Nickolaus-Tretter Collection] at the U. I said no way would it go to the U if they didn’t apologize for the way they treated Mike. President Kaler did apologize, saying that this should not have happened and would not happen today, so we gave them the archives.

MM: The Tretter Collection is one of the country’s few and best collections of research materials for the GLBT community. More than 6 million pages of materials in 50 languages. It’s an award-winning collection and recognized worldwide. It’s the second-most heavily used collection at the U of M [the first is the Immigration History Research Center archives]. The curator, Lisa Vecoli, is a true visionary and we’re proud to be part of that collection.

MP: Michael, you spent a few years working at Gay House while waiting for the university to give you the job it offered you. [A legal battle he lost; McConnell spent his career with the Hennepin County library system instead.] What happened to that organization?

MM: Gay House was a very valuable resource for people in the 1970s, and it was a great generator of spin-off groups that met more specific needs, such as Out Front Minnesota and other political groups. The needs that Gay House met are being met elsewhere now, simply because gay people are no longer ghettoized. Professionals throughout the community have been trained to provide services to all people, so gay people no longer have to seek out specialists. In the 1960s and ’70s, gay people were concentrated in certain neighborhoods, such as Loring Park, but now they are in the suburbs and everywhere. The need for security and community has diminished as we find acceptance in the wider culture.

MP: In the 1980s, you decided it was time to step down as activists. Now you are once again fighting for your own marriage.

JB: Yes, only because we have to. Blue Earth refuses to record our marriage, so we’ve had to ask a federal judge to step in. We have submitted for survivor benefits with the Social Security and got a call back saying that the case has been forwarded to the Justice Department. We aren’t alone; people have been raising the issue in relation to civil partnerships. Our opinion is that Obama is going to want to resolve this as part of his legacy. Our marriage license was legal, issued under a seal of court and signed by a minister and everything is legal. I told Mike we would get legally married and we did, and I will stand up and defend our rights. We started this fight, and now we have to finish it.

Still in legal limbo despite ‘Wedding Heard ‘Round the World’