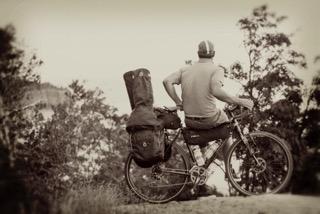 Most artists hope to create something that will last a long, long time, maybe even give them a shot at immortality. Ben Weaver is the exception to that aspiration. He’d like his poems and songs to affect people, but he doesn’t want his work to have an environmental footprint; he’d be perfectly happy if his books just melted back into the earth.

“I am so moved by the fluidity of the natural world that it makes sense to me that art work the same way,” says the poet and singer-songwriter. “I like the idea of just making a few hundred copies of a book, and then moving on to the next work. Why should everyone have one of everything? I can’t run from the fact that I live in a capitalist society, but I am committed to making the things I put out there worthwhile.”

Weaver writes, illustrates, prints and binds his books of poetry by hand. (He has also recorded eight albums of music.) “I think a handmade book that sells for $20 is still pretty affordable. You can see what goes into it when you hold it; it’s not just printed and perfect-bound in a factory in another country,” he says. He says Hans Weyandt [formerly of Micawber’s bookstore] introduced him to Stockholm, Wisconsin, fine artist and letterpress printer Gaylord Schanilec, who inspired him to think about the book itself as a work of art beyond the poems within it. (His work has also been published in journals and online.)

“I asked him how long it took him to set the type on a page he was working on, and he said, ‘about five hours. But the time is the point.’ And that really resonated with me. It’s not about making a product, it’s about the experience of doing the art. And as I get older, I realize that it’s all about living a life in art.” 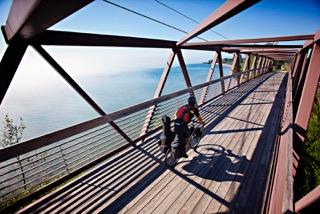 A few years ago, Weaver was on tour, driving across the country from one music venue to the next, and the road really began to wear on him. He was passively sitting there, burning fuel and feeling miserable. So he decided to tour by bike instead, pedaling hundreds of miles between shows with his guitar, banjo and tent strapped on his bike. Bikepackers magazine just named him one of the top bikepackers of 2015, no doubt impressed by his 1,300-mile, 16-day circle tour of Lake Superior in 2015, during which he read poetry, performed his music and talked about land and water stewardship in partnership with environmental organizations. In 2014, his tour bike took him to New Orleans.

Pedaling along these waterways has naturally inspired work about water, trees, geology and the natural world, but Weaver doesn’t write much while on the road.

“When I’m riding, I’m not in a creative space so much as in an ‘animal mode,’ where the focus is on using my body to get somewhere, and finding food, drink, shelter, basic needs. Thoreau deals with this in ‘Walden’; he says when we secure food and shelter, we start to want other things, and question things, and that opens up space for art. When I’m riding, I don’t feel the need to make art, but when I get home, it all comes spilling out.” 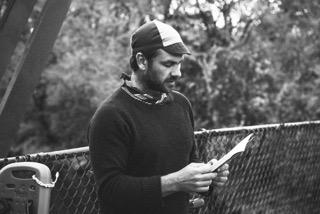 Weaver has worked for Wilderness Inquiry and in Twin Cities restaurants, but he currently makes his living exclusively through his various art streams. That’s not to say that he doesn’t sometimes feel compromised, such as when he has to take a sick child to the doctor by car. (“All kinds of minutia is going against you when you are a parent trying to make art.”) But he tries hard to make his work line up with his values. It’s been done before.

“I became obsessed with [Minnesota poet and activist] Meridel LeSueur, because her work showed me how I could step away from traditional, venue-based performance life and make a greater impact. She was standing up for things not by being a provocateur by but showing people how to make connections between their actions and its impacts. I feel she helped me find my path.”