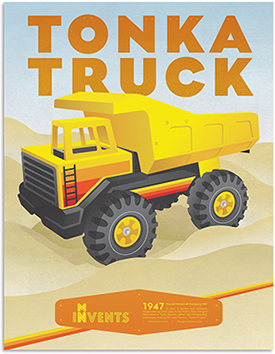 You knew Post-It Notes were invented here (3M, 1977), and Spam (Hormel, 1937), and yeah, Tonka Trucks (Mound, 1947), of course. But you probably haven’t heard that the handled grocery bag is a Minnesotan creation, and the Univac, and the deep-sea submarine, too. The DSV Alvin submersible (1964), which has trolled the ocean for the past 50 years, checking in on the Titanic and exploring thermal vents, seems an unlikely invention to emerge from the prairie — or rather, from General Mills’ headquarters, to be precise. But the pedestrian limitations of geography don’t get in the way of the inventive mind. If anything, they advance it.

“We spend a lot of time indoors hiding out from the weather, and I really believe that makes Minnesotans more inventive. We have a wonderful disproportion of crazy inventors here, more so than other states,” said Jeff Johnson, founder of the Hamilton Ink Spot poster art studio (St. Paul, 2014) and the brand design firm Replace (Minneapolis, 1996). Johnson has just released “MN Invents,” the first volume in a collection of books that celebrate inventions that came from Minnesota.

“I work with a lot of inventors and innovators, and I’m always fired up about the amazing things people dream up here. So I wanted to honor those ideas with a series of posters,” said Johnson. But it didn’t stop there. He realized that he wanted to tell the stories behind the inventions, too, because things like mind-controlled helicopters (University of Minnesota, 2013) and Nerf balls (Parker Brothers, 1969) don’t come out of thin air. (OK, they kind of do.) “I decided we really needed to make a book, and then another one, and just keep adding them, because there are so many things that came out of this state. I consider this my love letter to Minnesota.” 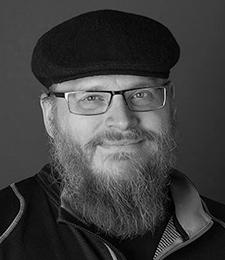 Each invention gets a two-page spread in the book. One side is a mini art poster, each one rendered in a different style. The other is a beautifully economical origins story that describes the inspiration behind the invention and its subsequent success and influence. (And a little tragedy: Jeno Paulucci always regretted selling his pizza roll [Aurora, 1968] to Totino’s.)

“I could have written an entire book on every one of these inventions. There are so many great stories in the history of every one of them. I thought they were interesting as posters alone, but adding the text page gives the book a bedtime story quality. They are like little legends about our state,” said Johnson. 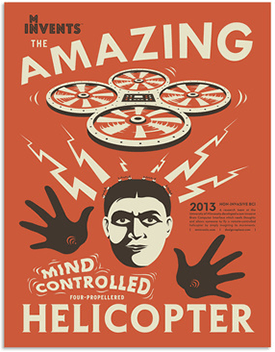 Johnson says the book was written for audiences of all ages, but he especially hopes that young people take a look, because he thinks innovation is contagious. “Kids love to hear about inventors. As a Scout leader, I will run through state history lessons with them, and when I tell them all the cool things that have been invented in Minnesota, their eyes light up. They dig it. And then they start inventing things on their own.”

In fact, that actually happened at his house. His young son invented a waffle mold, and now holds his first patent. Johnson says kids are natural inventors, and learning that their state is known for so many important innovations creates an environment that encourages them to solve problems in new ways.

“So many inventions are just the result of a series of compiled innovations that overlap each other. Each new thing inspires someone to make the next new thing, and so many of these things couldn’t have happened anywhere but here. In Minnesota, we are standing on the shoulders of giants.”

Book launch party & Nerf battle. Feb. 11, 6-9 p.m. at the Solar Arts Building, Minneapolis. Books and art posters from the volume will be available.