A fair amount of imagination is required when you join James Eli Shiffer on one of his walking tours of downtown Minneapolis’ old Skid Row. “It’s a bit of a ‘ghost tour,’ because nearly everything is gone,” says the Star Tribune editor and columnist, and now author of “The King of Skid Row: John Bacich and the Twilight Years of Old Minneapolis” (University of Minnesota Press). 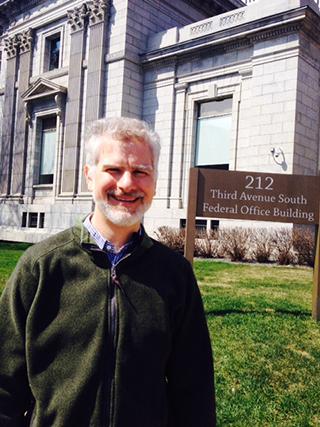 Shiffer doesn’t have any trouble seeing the bars and hotels that used to line Washington Avenue, and he can bring them back to life through stories. He can describe the Gateway District and park that formed a grand entrance to the city just south of the river. He can tell you what once stood where those parking lots are today, and when he points out the drab office building on the block the fantastic Metropolitan Building once occupied, it’s clear he wishes the city hadn’t razed it in 1961, in a blitz that took out 40 percent of the buildings in the neighborhood in a three-year span.

“Yeah, they went too far. It was a wonderful building — I’d love to have seen it. I also understand it was hard to envision any alternative to demolition at that time in history,” says Shiffer, who moved to Minneapolis only 10 years ago, but become a dedicated student of the city’s colorful past when a colleague lent him a video that showed the old Skid Row through the eyes of John Bacich, the owner of a bar, liquor store and hotel who documented his customers on film.

When Shiffer set out to find a series of photographs Bacich took of the customers at his Sourdough Bar, he discovered that Bacich (also known as Johnny Rex) was still alive. During the last three years of Bacich’s life, Shiffer absorbed his stories about old Minneapolis and Skid Row. Those interviews form the backbone of this book, which is a vivid companion to Larry Millett’s “Lost Twin Cities,” and illustrates in often tragic detail exactly why the Gateway District had to go.

“Over there was a place where you could buy a bottle of wine for 50 cents — turn around, and you’ll see the new Whole Foods, where you can buy a bottle of wine for $50. Today, thousands of people want to live in downtown Minneapolis. But in the 1950s, this part of town was known for blight. Business was moving to the current downtown core, south of here on Nicollet Avenue, or to the suburbs. Southdale opened in Edina and General Mills moved to Golden Valley. Nobody wanted to come down here.” 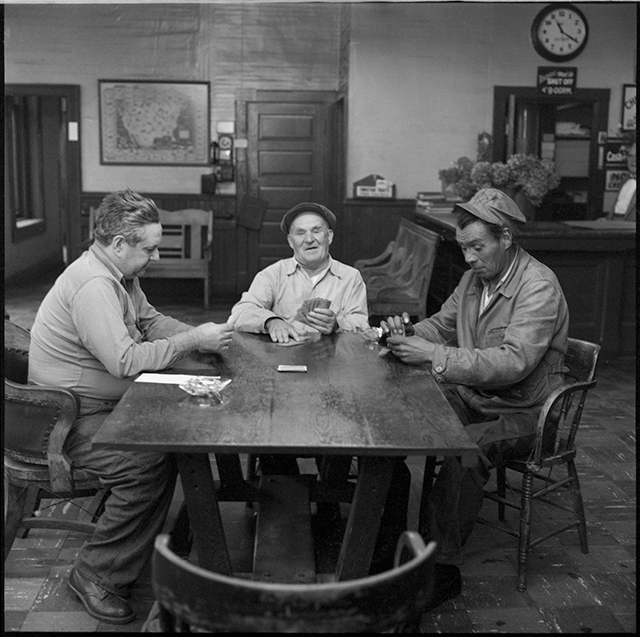 Courtesy of the Minnesota Historical Society
“William Bridges, Gust Tarsuk, and Clifford Christjohn play cards in the day room at the Pioneer Hotel. Johnny remembered that the hotel’s proprietor, Charlie Arnold, had a mansion in Southern California.”

Nobody, that is, except for the 3,000 or so men who populated the neighborhood. This group of men — mostly single, white, retired and hard-drinking — created a lively community that spent most of their time in bars, alleys, strip clubs and flophouses, or “cage hotels” named for their chicken wire ceilings.

While the 1950s are frequently held up as a time when America was great, thousands of men were left out of the postwar suburban dream. Shiffer describes these forgotten legions, many of whom worked for the railroads or were seasonal laborers in the lumber industry and mines. They populated Minneapolis’ Skid Row, as well as similar neighborhoods in Chicago, San Francisco, Seattle and New York.

“There was a real sense of menace in these places. They smelled terrible. People were drinking and urinating in the streets. There was crime, deep poverty, illness and fighting. The business district was encouraging alcoholism by selling cheap liquor at every opportunity. But it was also a safe place for an alcoholic to live.” 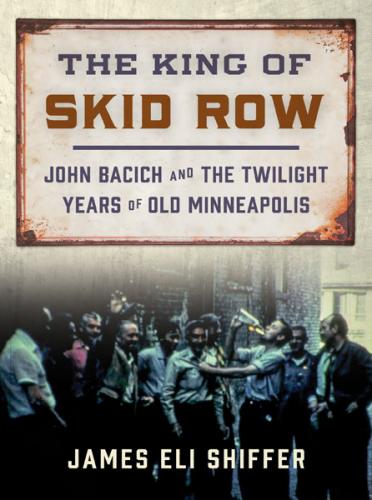 Shiffer’s book describes a real community, in which men who were widely viewed as unsavory characters were treated like human beings. Bacich didn’t just sell booze, he provided affordable shelter and even Christmas gifts, and when his customers died without family, he was the one who paid to bury them; the vets went to Fort Snelling.

“Johnny felt such affection for his guys. They were people, faces with names. He felt like he was taking care of them,” said Shiffer. “If the city could have just waited, that generation would probably have died out. The kind of seasonal, migrant jobs those guys had went away. We have different ways of dealing with alcoholics today. Maybe this could have been a historic district. But there’s a lot to learn about the redevelopment of Minneapolis by looking at Skid Row. When you wonder why sometimes our city doesn’t feel like a city, it’s because something is missing.”