You probably heard about Aaron Purmort after he had a seizure while driving in Northeast Minneapolis. A good Samaritan (who turned out to be a police officer) moved Purmort’s car so it wouldn’t get towed and left an unsigned note in Purmort’s pocket telling him where it was. A rare nice gesture in this world, it made the news. A couple of years later, maybe you read his obituary, which reveals his true identity as Spider-Man, who lost his life in a battle with a villain named Cancer. (Their son Ralph will avenge him.) Possibly you read My Husband’s Brain Tumor, the blog Nora McInerny Purmort wrote about the young couple’s foray into marriage and parenthood under the shadow of Aaron’s illness. If you’ve read the blog, you haven’t read the book.

“People used to just publish their blogs as their books, but that’s so 2003. My contract stated that I needed to write X-percent new material,” said Purmort, whose book, “It’s OK to Laugh (Crying Is Cool Too)” (HarperCollins Dey Street) delves into the murky afterlife of loss, young widowhood and single parenthood. Life handed Purmort a raw deal — she lost her young husband, father and second pregnancy in just weeks. But she responds with style, wisecracking her way through grief and finding gratitude for the great love story she briefly enjoyed. Purmort also runs Still Kickin’, a nonprofit that raises money for brain cancer research and helps people deal with the financial impact of serious illness.

MinnPost: Throughout the book, you say that you don’t know what you want to be when you grow up. Does this book answer that — are you a writer?

Nora McInerny Purmort: Yeah, I think I can say that. I would never have thought I could run a business, and now I run a nonprofit. I popped up a Square Space and there you go. I wrote a blog and a book, and so I’m a writer — I just did it. So I tell anyone who says they want to be a writer, Yeah! You can do that! Just do it. Sometimes people need someone to give them permission.

MP: Did Aaron give you permission?

NMP: Aaron and my dad always told me that I had potential and talent, and just needed to go for things. I think there’s this female tendency to downplay your skills. It’s not universal, but I see it a lot. The most tragically popular tweet I’ve ever done talked about how I felt like I was a huge, talentless failure, and so many women responded to that, and identified with it, that it made me think, OK, that’s not acceptable. So what now?

NMP: Yeah. Although it does suck that I had to lose something in order to realize it was OK to do what I always wanted to do. But I don’t know that I could have done it sooner. I didn’t quit my job when Aaron was sick. We needed the money, and we needed some sense of normalcy. Afterwards, well, that life died with Aaron. I wasn’t going to be able to go back to my cubicle and cry and be a zoo animal. Quitting didn’t feel like a ‘brave’ choice, it felt like my only choice.

MP: You started started writing right after you lost Aaron. Why didn’t you wait?

NMP: Agreeing to write a book when Aaron had been dead for five minutes maybe seemed too soon, but for me, it was the only time. I was still in shock, and to communicate that in a real way, I needed to write it right now, not when I’m in my mid-40s and know that I’ll be OK. I needed to write while I was still grieving to communicate the actual struggle. That’s the hard part that society doesn’t want to see. Aaron was a very popular person who had a lot of friends who weren’t there for him when he got sick. We don’t have the tools to deal with grief, because society wants us to keep it hidden.

MP: Grieving is weird emotional territory to do work in. Did you know you could deliver?

NMP: A really cool thing about me is that I never know what I can’t do. I totally thought I could write a book, although when I actually got the book contract, I spent a lot of time just staring at the cursor. My fever of self-doubt ended when my sister and I went to see [the Amy Schumer film] “Trainwreck.” I laughed so hard I cried, then I walked out and thought, Here is a woman my age, and she made this thing. She didn’t say, “This is hard, I can’t do this” — she just did it. I went home that day and wrote and wrote, and after that, I knew I could do it. 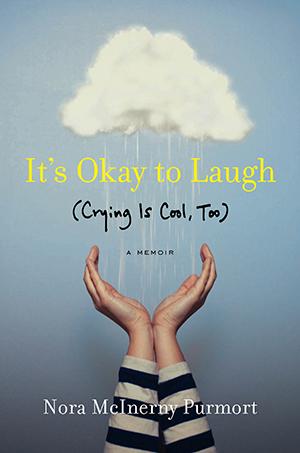 MP: How you feel about the proliferation of media that lets readers follow the author’s medical situation or other tragedies?

NMP: I remember reading Matt Logelin’s blog, way back in 2008 or something, when people still blogged instead of Facebook, and just bawling and really feeling the pain of his experience [of losing his wife after childbirth]. But I never thought I’d experience it myself. But reading him did help me, in a way. Now I hear from people going through their own losses, so I hope I honor that spirit with Still Kickin’. I hope readers see strength, instead of pain. And I hope they get that this will happen to them too. Maybe not this exact thing, but something else awful. And maybe someone will say, OK, well, my dad already died, and then I’d say, that’s only the beginning. Something else will happen. This is what life eventually gives us all.

MP: Is that why you focus on the idea of “now” [a word she has tattooed on her wrist]?

NMP: Yeah. It’s so beautiful to be here. We inoculate ourselves to what it means to be alive. I am a fucking work in progress but I feel like all this loss has really taught me how to be alive. And I know exactly how lucky I am. My book shows a pretty accessible level of suffering. I don’t have ebola. I didn’t have to put my child in a boat to give them a chance to live. Aaron had good health care and people were there for us.

NMP: Thank you. Aaron felt like that too. He was mad because he missed my birthday because he was sick. I was like, I don’t care. But he cared, and he’d planned this huge surprise birthday party for me at the Parkway Theater — it actually said Nora’s Birthday on the marquee. So, he wasn’t mad that he was sick, he was mad that it prevented him from doing everything he wanted to for me and Ralph.

MP: What did writing this book do for you?

NMP: It helped me acknowledge what happened to me, as well as Aaron. People think I was doing OK because I was able to stand up at his funeral and give the eulogy. But you just do it. You bubble wrap that grief. I was able to see what a beautiful and horrible thing we’d just gone through, and understand that we aren’t really equipped to handle that at such an early age. I was able to understand what an honor it was to have my life intersect with someone as wonderful as Aaron. I understand this level of richness that my life has because of this thing that happened. But I’d trade all this self-actualization and more to have him back. Of course.