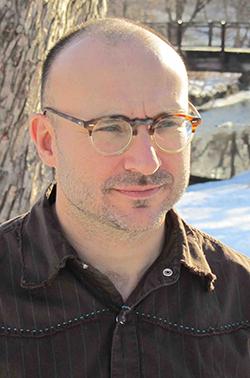 Frank Bures was a teenager living in Winona in the 1990s when he accepted an opportunity to become an exchange student in Italy. He didn’t have a burning desire to see the world — he just didn’t have other plans. That casual decision reshaped his life. A year later, he returned home with an understanding that reality is a state of mind influenced by one’s geographic location. And he couldn’t wait to experience as many new states of mind as possible.

Today, Bures has spent two decades writing about the world’s curiosities for publications like Harper’s Magazine, Esquire, Outside and Bicycling. We have plenty of curiosities here, too; the Minneapolis writer searched for Sasquatch in the North Woods. But the obsession that has consumed him for many of those years has been a quest to understand how our cultural landscape influences health and mental health. In his new book, “The Geography of Madness” (Melville House Publishing), Bures explores the connection between culture and mental health, centering on a global phenomenon in which men believe their penises have been stolen. Physical examination would indicate otherwise, but affected men claim that their penis has been stolen or shrunken — via magic, witchcraft or illness. Their claims are taken so seriously that alleged penis thieves have been killed in retaliation. Bures traveled the world in search of these outbreaks of penis theft, and returned with an understanding that our surroundings make all the difference in what we believe and how we feel.

MinnPost: In most of the countries you visited, people told you penis theft didn’t happen anymore. Do you think they were telling you the truth?

Frank Bures: It’s hard to know, as an outsider. People don’t know what to make of these things, and to really win trust and dig into the undercurrents, you have to live in a place for a long time. In many places, I could sense weird political things going on under the surface, but I was locked out of that understanding. But some people had no compunction about talking about things openly. Like the man in Nigeria — he had a story and he wasn’t shy about telling it.

MP: One of the doctors you interviewed suggested that globalization has caused perceived penis theft to decline, saying we are moving toward ‘one world, one culture.’ Do you think that’s true?

FB: No, I disagree with that. Cultures have existed for 70,000 years, and only in the past 100 years have they been in much contact with other cultures. It’s only since the 1990s that many have connected in a significant way. It’s easy to convince yourself that everyone is like us, or will be soon, but if you visit a place like Hainan Island, where there are 10 or so distinct languages and cultures, you realize we’re a very long way away from one world. 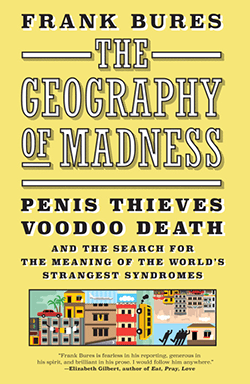 MP: We are seeing a rejection of Western medicine in this country. Is that an example of returning to these types of culture-bound beliefs?

FB: Well, there’s definitely a subcultural movement that suggests that only nature is good, or only things as God created them, and then man came in and wrecked things. And if that’s someone’s belief, you can’t convince them otherwise with any scientific or reality-based evidence. There is actually a thing called the “backfire effect,” in which you can present people with indisputable facts, but if those facts don’t line up with what the person already believes, those facts will actually reinforce their existing beliefs.

MP: This book is about global psychology, but it’s also about your search for personal identity in a world that keeps showing you different ways to be. Did you know that would be part of this story?

FB: Yeah, I didn’t realize that the stories we tell are what we use to make our own self-identity. They are just a vehicle to understanding how we should conduct ourselves in the world and what should be important. When you visit places that are very different than the place you grew up, you come to realize that there is not necessarily one reality. I think my quest to understand culture and how it shapes us is absolutely the result of my traveling. But seeing the world also definitely changed and shaped my identity, even as it disrupted my sense of being part of a culture. But that’s what culture is: a network of stories that we feel we are part of and describe what’s relevant to us. I just keep amassing a bigger collection of stories.

MP: You write about meeting [the Minnesota nature writer] Paul Gruchow in college, and he tells you not to become a writer “unless there’s nothing else you can do.” You’re a writer, after all. Would you say it’s sustainable?

FB: I don’t know. I think so. A freelance writer is already hard-wired to accept risk. The industry is always changing. The world is always changing. You hear a lot of dire pronouncements about newspapers, magazines and books, but people are still reading. I was living in Portland [Oregon] and working at Powell’s Books when Amazon first started going gangbusters. Bookstores were supposed to die, but now they are making a comeback. Meanwhile, e-book sales are down. This doesn’t surprise me. I’m a low-tech kind of guy, though; I still have a flip phone.