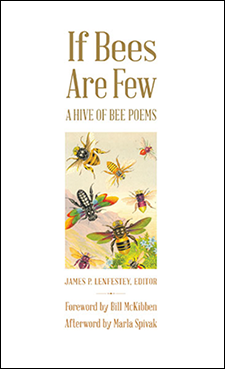 Poets have long found inspiration in bees. How long? At least 2,500 years, says James Lenfestey, who includes a translation of a bee poem by Sappho in “If Bees Are Few: A Hive of Bee Poems” (University of Minnesota Press). Virgil wrote about bees too, as did Rumi, Tennyson and Shakespeare, also included here. This time-traveling anthology goes back to when people observed bees but didn’t much worry about them, and comes forward to now, when we do (or should).

Emily Dickinson wrote 26 poems about bees; she is included in the book. Sylvia Plath’s “Stings” is in it, appropriate since bees are one of about three things for which she’s best remembered. Lenfestey includes contemporary poets in this volume as well — they aren’t spending all their time on the hive mind of Twitter. Sometimes they are thinking about bees. Lawrence Ferlinghetti, Jane Hirshfield, Nick Flynn, and Mary Oliver have bee poems in this anthology. Of course Mary Oliver has bee poems. But who knew Sherman Alexie was thinking about bees? He’s included, with “In the Matter of Human v. Bee.” If the bees go, he writes, “The animals will still follow/Flora to dust. And then we die.”

That’s the whole point of this anthology.

“I have been aware of the plight of the bees for a long time, and I wanted to do something to help — what little help it can be — through the arts,” said Lenfestey, a former Star Tribune editorial writer and the author of several books, including “Seeking the Cave: A Pilgrimage to Cold Mountain”). Lenfestey kept bees when he lived in a rural area in the 1970s. Today he lives in Minneapolis and plants bee-friendly landscapes, in what he says is a tiny effort to offset the massive monoculture of bee-unfriendly agriculture.

“If anyone can save the bees, it will be Marla Spivak,” he said, “so I wanted whatever honey this project will yield to go to her work at the U of MN’s Bee Lab.”

Spivak is a MacArthur Fellow and McKnight Distinguished Professor in Entomology at the University of Minnesota and has been working with bees since 1975. She is currently studying the effects of agricultural landscapes and pesticides on bee health, and co-developed the Minnesota hygienic line of disease-resistant bees. Her efforts to get out the word about the impact of colony collapses on agriculture and the devastating impact of neonicotinoid insecticides on bees have raised an alarm: Unless we make some changes, time is running out for bees.

Lenfestey started collecting bee poems in a file on his computer. Then he started seeing bee poems everywhere. Friends would send him ones they’d written or found. On his way in to visit Milkweed Editions, he saw a broadsheet with a bee poem on a door: Pattiann Roger’s poem “Service With Benediction” (“—like glass lanterns, there’s enough summer sun caught/in these jars of comb honey to give us/ample light to travel by on a winter night”).

“Poet friends have a vast knowledge of the many bee poems out there. Jim Rogers [director of the Center for Irish Studies at the University of St. Thomas] helped me bring in several wonderful international poets. We like the honey to have the flavor of many different flowers. [Minnesota poet] Jim Heynen took to this project like bees to nectar and helped me quite a bit.”

Heynen has a poem in the collection — in which the bees sting a person, an event that underscores the complexity of the human-bee connection — as do a generous number of Minnesota poets, including Robert Bly, Heid Erdrich, John Caddy, Tom Hennen and Joyce Sutphen.

“Every poet in the anthology donated their fees to the project,” said Lenfestey, although he did run into some complications with a few of the dead poet’s estates. He also got the attention of author Bill McKibben, who wrote the book’s foreward. 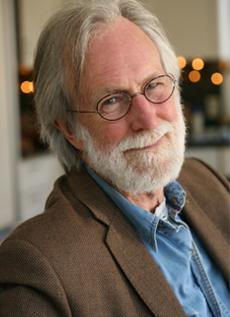 “Bill McKibben is busy saving the planet for all of us, and I didn’t know that he would have the time to contribute to this venture, but I read his memoir “Oil and Honey: The Education of an Unlikely Activist” and when I learned that he finds solace — in the dispiriting face of everything that is happening to our world — in beekeeping, I knew I had to try to include him. Like Marla Spivak, he is working steadily against all odds.”

“Bees are in real trouble and it’s the tragedy of the commons,” he said. “We are all involved in a great planetary struggle, a war against the very ecosystem and the smaller creatures that live in it. The plight of the bees reminds us that this ecosystem ultimately supports us and these creatures provide us with tremendous services. We all profit from this and now its becoming clear what the ultimate costs will be.”

Anthology of bee poems, from Sappho to Dickinson to Bly: Proceeds to benefit U’s Bee Lab