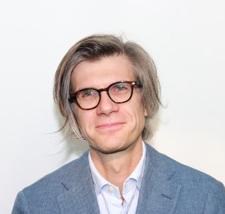 The blurbs about Dylan Hicks’ new novel, “Amateurs” (Coffee House Press), are a little distracting, if not outright misleading. Read them and you’ll learn that the book centers on a young millionaire who inherited heaps of money from his family’s sex toy business. Perhaps that’s not your cup of tea. Understandable. Perhaps it is your cup of tea — but then you’ll be disappointed. There’s little lewdness in this tale, and that description blots out just about everything else about the book.

To the heir, the nature of the family business is beside the point. His only concern is to spend the money, and what better way to do that than with a wedding. With that event as the backdrop, this comedy of manners and messy courtship tale directly channels the spirit of Jane Austen. Readers, did you see that coming? I didn’t.

“I became quite an ardent Jane Austen fan, although not anywhere on the level of the very serious Austen scholars. Those people are very, very serious. But I studied what she did, because she’s so good at writing about relationships in a way that is just very funny. She spawned a whole genre of English comic novels, with writers like Penelope Fitzgerald and Barbara Pym. And you could say most rom-coms came from this tradition, and I wanted to play around with it, too, and see where it ended up,” said Hicks, whose first novel, “Boarded Windows,” came with a companion CD, “Dylan Hicks Sings Bolling Greene” — Greene is a character in that book, who, like Hicks, is a musician. Hicks has been a longtime part of the Minneapolis rock scene, and continues to write songs as well as books.

“I wasn’t terribly interested in literature in my teens and 20s — I was single-minded in my interest in music, collecting records and playing music. I loved to collect records and was so hungry to hear new things. But music didn’t really pan out as a career,” says Hicks.

“I started thinking about writing more when I got into reading and writing music criticism. In my 30s, I became a general freelancer and did a fair bit of music writing. I returned to college in my late 20s — I was actually politely asked to leave college the first time, because I wasn’t a very dedicated student — and experienced what I guess you might call an intellectual awakening. I discovered Nabokov, David Foster Wallace, Nicholson Baker, Lydia Davis and Mary Gaitskill. I ended up becoming a very devoted reader and discovered novels and poetry, and writing.”

Hicks didn’t actually end up finishing college the second time either, he says, as he and his wife became parents at about the same time he was offered a job writing about theater for City Pages. In 2006, after the City Pages was sold (for the second time), Hicks started writing short stories as a lark, and sold the first one he sent out. “I realized I had an innate love for playful and surprising language,” he said. He’s not alone: When he submitted a word game to The Paris Review, that led to a monthly spot writing the magazine’s puzzle contest. 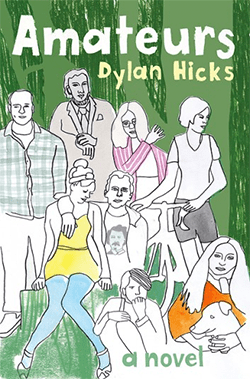 “The original puzzle was in the form of a rhyming puzzle based on the word game Hinky Pinky. My band members introduced that to me when we were on the road — we would entertain ourselves with that kind of thing to pass the time,” he says.

In “Amateurs,” a loosely knit group of 30-something friends fret about relationships, trying to make a mark in the world and wondering what to do next — coming-of-age material, drawn out a decade or so beyond youth. It’s a dialogue-heavy book, full of wry repartee and awkward interactions and the idle chatter old friends.

“I do feel some anxiety about how it will be perceived, because some readers might think it’s insular. The focus is on the relationships between characters rather than any larger setting or action,” said Hicks. “I really love writing dialogue, imagining conversations. I can hear my characters saying things. I also like courtship dialogue and flirtation. Who doesn’t? That’s so much of the fun.”

In other words, never mind the sex toys. Just bring on the conversation.