“When are you going to have a book out?”

Dan Corrigan says he’s been hearing the question for 10 or 15 years, but fans of the influential and inspirational Minneapolis music photographer have been saying it longer. Finally, that day has come.

“Heyday: 35 Years of Music in Minneapolis – The Photography of Daniel Corrigan” will bow Nov. 1 via the Minnesota Historical Society Press, with a release party slated for Oct. 28 at the 7th Street Entry and an accompanying photo exhibit at Mill City Museum that opens Nov. 16 and runs through April.

Put together by MNHS editor Josh Leventhal with assistance from writer Danny Sigelman, who penned the book’s vivid bio of Corrigan, “Heyday” is a 208–page feast for the eyes and ears that time and again speaks to Corrigan’s singular gift as a photographer. In the end, Corrigan says he had “no say” in what went into the curation of what is easily the finest collection of Minnesota music photography ever put between two hard covers.

“I just basically gave these guys all this stuff, and they did it,” said Corrigan last weekend, sitting with Sigelman in his northeast Minneapolis home as Corrigan’s 12-year-old son, Felix, played video games in the next room. “I just never … When we were going through stuff I was telling stories and maybe gleaning it and making it go in the direction where I thought it should go, but I really had no say. I had no say in nothing.

“This isn’t the first time where we’ve tried to do a book. It’s been a great idea for 20 years. A bunch of people have proposed it to me, with basically everybody wanting to make money on my content. That was the general consensus. So we finally got to a point where I found a good deal with another publisher, and we got into the editing process and Mary Lucia was going to be the guest writer, and we got pretty far along in that and the editor either got fired or got moved to another publisher, and that project just evaporated. All this work just went poof, and at that point I just gave up.”

One obstacle to putting together a definitive collection of his work is that his filing system consisted of boxes stuffed with prints and negatives that went back to 1981 — an overwhelming prospect for Corrigan, who has worked as First Avenue’s official house photographer for years. Enter Sigelman and Leventhal, who spent months scouring the archives for the 500 photos that would become “Heyday.”

Sigelman said he and his friends “used to make fanzines when we were teenagers, and we’d do interviews and paste the pictures together, and to me this is just the ultimate fanzine I could ever make.” Sigelman pitched the idea to Leventhal after the two met at a Corrigan interview event at It Records in Minneapolis. “It’s all my favorite bands with all Dan Corrigan stuff.” 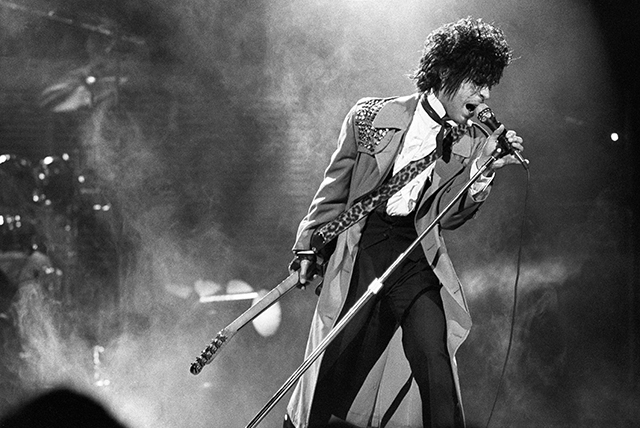 Photo by Dan Corrigan
Prince circa 1982

“I think just getting Dan on board and committed to this was a big first step,” said Leventhal by phone from his MNHS desk. “As you know, other editors and publishers have tried to do a book with him before, but have run up against one obstacle or another, and I knew that to get it done and to get it done on a pretty aggressive schedule that we’d laid out, I was going to have to really get my hands in there and go through this massive collection of photos.

“Dan certainly provided direction and clues as to the images in the book and what some of his personal favorites were, but the sheer amount of photography was at first daunting with so many great options and picking the best of the best, or the most distinctive ones, the most interesting ones, from the bunch.”

Sigelman: “I wanted people to experience what I experienced, going through all the boxes and being overwhelmed. People are like, ‘Who’s in the book?’ I’m like, ‘Everybody.’ ”

“Heyday” opens with a breathtaking early photo of Prince in concert at First Avenue and closes with a live shot of the Suicide Commandos and Hüsker Dü’s Bob Mould performing “When U Were Mine” two days after Prince died on the same iconic stage. In between are photos that are sure to leave future generations wondering how the hell all that music happened in one town over the course of one relatively short time, with special nods to Corrigan favorites the Suburbs, Soul Asylum, the Replacements, Hüsker Dü, Babes In Toyland, Uncle Tupelo, the Amphetamine Reptile Records family, and portraits of such Minnesota lights as Ed Ackerson, Dave Ayers, Steve Fjelstad, Mason Jennings, Kevin Kling, Lizz Winstead, Kevin Cole, Peter Jesperson, Maggie Macpherson, Steve McClellan, Slim Dunlap, Spider John Koerner, and so many more. 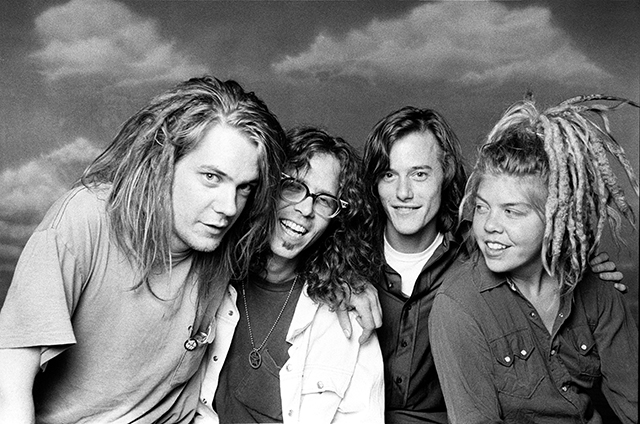 “Nobody’s ever seen those photos of Michael Jackson,” said Sigelman, pointing to page 82.

“That ’80s indie rock scene, post-punk, Prince, and then later on rap and hip-hop, is such an important part of the cultural scene here and who we are as Minnesotans in a lot of ways,” said Leventhal. “And so many of these bands who are in this book have this do-it-yourself DIY approach to the scene and really worked hard to be a part of what was such a vibrant part of our community. A lot of these musicians and artists will pop up in different bands and different combinations of people and it kind of speaks to how much of a community there was and is, in the music scene here. And that was a fun thing to see, looking through these photos and going, ‘Oh, I didn’t know so-and-so was in a band with this person or in a band before the ones that we all know and love.’”

Corrigan’s obvious intimacy with his subjects and love for the music and scene shine through in every shot, from portraits and live shots of the Blue Up, Gear Daddies, Doomtree, Atmosphere, Pink Mink, Playhouse, Trip Shakespeare, Gwar, Lauryn Hill, Bob Stinson, Golden Smog, the Clams, the Blu Hippos, Bruce Springsteen, Lou Reed, the Widgets, the Clash, Iggy Pop, David Lee Roth, the Ramones, the Time, Jello Biafra, Henry Rollins, and on and on.

“He always says he was just in the right place at the right time, and there’s an element of that, but that takes away from the fact that he worked really hard to establish himself with musicians, with lighting guys, with sound guys, with the venues, to know where to stand or where to be at the right time,” said Leventhal. “And that comes out in his concert photography: He knows the key spots and times the moments really well.”

Ironically enough, “Heyday” comes along at a time when Corrigan no longer considers himself a photographer. 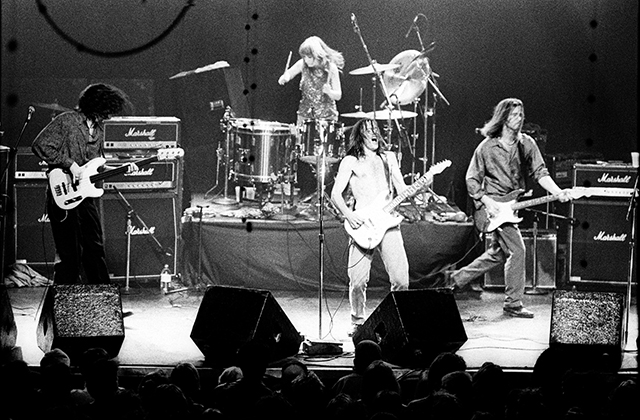 “It’s a huge undertaking, and it’s funny, though, that it didn’t happen until I quit being a photographer. The thing finally comes out. I think that’s funny,” said Corrigan, who works nights as a member of the stage crew at First Avenue. “I’m not a photographer, I don’t make my living as a photographer. I make my living at First Avenue. Completely happy doing that. I shoot only for myself now. I don’t have to shoot anything I don’t want to, and I’m better off for it.

“I love making pictures, and maybe I have some sort of compositional talent for doing them, but as far as being a photographer and the business end of it — the worst. I never was a very good businessman, but I loved doing it, it’s super cool. So it’s kind of nice to have that pressure taken off.”

Part of that career shift can be attributed to the rise of digital photography and how parts of Corrigan’s expertise and talent has been usurped by smartphones. Still, for the thousands of fans who grew up to the sound of his photos, Corrigan will always be a photographer, and in that respect, “Heyday” belongs to the lot of us.

“I wanted to include some of Dan’s more modern stuff, where he’s doing more artful pictures, not of bands, but this is the band focus,” said Sigelman. “I mean, I said in there that we could do a whole book of naked women and cats. When we first agreed to do this book, it was going to be smaller, but it grew. When Josh came over and saw all the stuff he said, ‘Yeah I think it needs to be bigger.’ ” 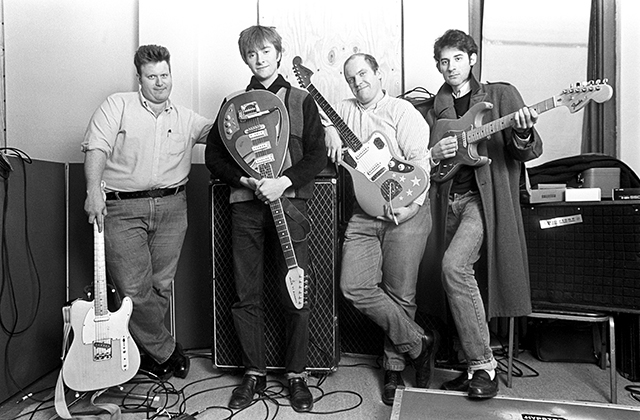 When Corrigan finally received his copy of “Heyday” in the mail, he took it down to the Matchbox coffee shop up the street from his house and drank it in.

“It was like seeing one of my pictures on a billboard,” he said. “That’s happened a couple times, and that’s really cool. I have this thing where I don’t think an image is really a photograph until it becomes a hard copy. Other than that it’s just a tenuous thing.”

“Who’s the publisher?” he asked, then answered. “The Minnesota Historical Society Press. You know, this has become a little piece of history.”

Pictures from a revolution: A preview of Daniel Corrigan’s new book of music photography