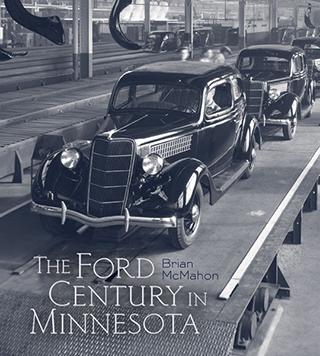 When we talk about Ford in Minnesota, we are now talking about redeveloping its Twin Cities Assembly Plant site. We’ve moved on. But author Brian McMahon says not so fast — “Let’s remember what happened there.”

The popular factory tour the Ford Motor Company offered at its Highland Park Plant no doubt inspired some tour-goers to head to their local Ford dealership to take home one of the marvels they’d seen rolling down the line. For McMahon, the tour inspired him to write a book.

“I originally just wanted to see the buildings Alfred Kahn designed for Ford,” said McMahon, a trained architect and historic preservationist who has written extensively about industrial and architectural history. “It started out as a modest intention; I thought it would be fun to take the tour. Well, it was so amazing. The tour was led by a retired autoworker, and he was so informative. I was completely captivated. I wanted to learn more, so I began exploring, and talking to people, and one little bread crumb led to another, and five years later, I thought maybe I had what could become a book.”

Make that, oh, 18 years later before the project, “The Ford Century in Minnesota,” (University of Minnesota Press) was finally finished. During McMahon’s epic research journey, he interviewed dozens of autoworkers and their descendants from every era of the plant’s history; he discovered that Minnesota, while no Detroit, was a pivotal part of the automaker’s expansion and success; he recorded stories and secrets of a company history that was entwined in the development of the Twin Cities; and he witnessed the ultimate closure and dismantlement of the Highland Park institution.

When he began interviewing people, McMahon encountered some hesitancy. Some autoworkers didn’t see their stories as particularly special. Others worried that talking about Ford might be viewed unfavorably by the company. But toward the end of the plant’s run, a growing sense that they were part of something special made the author’s job easier. Workers invited him to their homes, gave him their plant memorabilia, and shared union minutes, records and newsletters with him.

“Telling this story helped me understand Minnesota,” said McMahon, a transplant from the East Coast. Although Ford’s story is more typically understood as a Michigan tale, McMahon tells it from a Minnesota point of view. He examines Ford’s Minneapolis and St. Paul plants and dealerships, as well as the role the Mississippi River played in the St. Paul plant’s story — and how Ford dealt with a near-catastrophic flood in 1952. He explored Ford’s role in labor history, Henry Ford’s connections with Nazi Germany, the impact of wars on the company, women’s roles in the auto industry, the role other Minnesota companies played in the development of Ford’s products, and conditions for workers. He describes how Ford enabled workers to achieve the middle-class dream and also how it later eroded workers’ rights and pay, and how the forces of deindustrialization and globalization ultimately led to the day in 2006 when Ford announced the impending closure of the St. Paul plant.

“You can understand this election in a nutshell by looking at what happened with Ford in Minnesota,” said McMahon. “The workers began with very few protections and very difficult conditions. The labor unions helped them rise to a decent quality of life. And then wages and protections evaporated along with union protections, and ultimately the jobs went away. Things came full circle. The decline of the blue-collar worker can be understood by looking at this one company. It wasn’t just a job for these people. They lived together and died together. That’s what kept me working on this project for so many years. I had a commitment to tell their stories.”