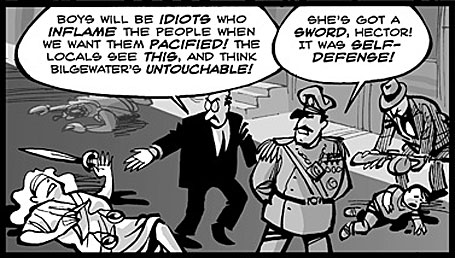 Come Turkey Day, the Strib will be a Banana Republic no more.

Thanksgiving will mark the last of Kirk Anderson’s “Banana Republic” op-ed strips. For two years, Kirk has battered our Jack Bauer fantasies with his savage parody of an all-too-familiar dystopia with “hearts of silver and mines of gold,” where the warmongering, torture-craving Generalissimo Wally gleefully kneecaps political dissent and guts the rule of law.

When the really detailed Twin Cities journalistic history is written, it will show that Kirk’s work was, in effect, the first graphic novel to creep into a local daily’s pages. More richly drawn than a Sunday strip, with the balls-out bravado that any alt-publication would crave, “Banana Republic” was unafraid to show a torture victim being melon-balled or a PTSD veteran coming home with howitzers instead of arms. It took Anderson most of the week to draw each Thursday’s strip.

“Banana Republic’s” allusions sometimes evoked crossword-puzzle pauses, but Kirk’s outrage was never in doubt and, as history will also show, well ahead of the curve. Yet when I made the mistake of asking him how he got a “radical” strip into a family newspaper, he gently corrected me: “The presentation might be radical, but I think it was surprisingly centrist,” he said. “It was anti-torture, but pro-democracy and pro-Constitution. … If that’s not centrist, we’re in even more trouble than I thought.”

Anderson has “nothing bad” to say about the Strib; two years for a freelance gig paying multiple hundreds per week is “pretty good,” he insists. He praises his editors, saying he rarely had his sharp edges dulled. “The one that makes me laugh — I don’t know how you may or may not tell this funny or clean — is one where I drew Generalissimo Wally torturing someone by inserting white phosphorous up someone’s butt with turkey baster. Torture is a big theme of the strip, and white phosphorous and the U.S.’s use of it had been in the news. My editor said, no, you can’t show phosphorous sodomy in a family paper, so it ended up being a turkey baster in a locked open mouth.”

Kirk said he was told his dismissal was “the ‘standard reassessing our priorities’ reason; that they needed money for another part-time editorial writer to replace the ones that they cut.”

Since Generalissimo Avista took over, the Strib’s editorial writing staff has been gutted; people like Jim Boyd, Steve Berg and Kate Stanley have not been replaced; another vet, Dave Hage, will leave soon. By my math, Kirk’s freelance pay won’t even cover half a full-timer, but interim-and-possibly-longer editorial page editor Scott Gillespie has to be in triage mode right now, and several editorials a week no doubt look more alluring than a single quarter-page cartoon.

Of course, we media geeks are watching the edit page for a scramble to the mushy middle and perhaps beyond; some fairly credulous pro-Pawlenty editorials seemed like tea leaves. The forced exit of perhaps the sharpest-penned lefty, intentionally or coincidentally, only strengthens the narrative.

While Anderson says “Banana Republic” is probably too labor-intensive for someone else to afford, he does want to continue political cartooning. That should be a hint to those around town who say they value quality.