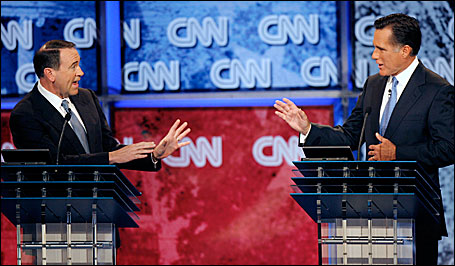 Earlier this year, Republican presidential candidates declined to repeat the Democrats’ YouTube debate experiment, but after succumbing Wednesday, it was hard to remember why. Moderator Anderson Cooper began by promising a “difference in tone and substance,” and he was certainly right. Although debate sponsor CNN started with a YouTuber’s ode to each candidate (he slid a few digs into the stanzas), the user-generated entertainment value was much lower than for the Dems. The best was an animated, rifle-wielding Dick Cheney asking whether the next veep would have as much power as the flesh-and-blood version does. Guys throwing around guns and Bibles were more typical questioners.

The night’s preoccupations, as filtered by CNN? Illegal immigrants (four of 34 questions), federal spending (four), gays (three), guns (three), Iraq (three) and abortion (two). There were no questions about global warming or health care — which ranks above budget deficits, abortion or gay marriage as Republican concerns, according to a Pew Center survey.

Quick impressions from a guy who has voted in seven presidential elections, never for a Republican: Huckabee clearly won, both aesthetically and strategically. The guy does “compassionate conservative” so much better, and with much more élan, than George W. Bush ever did. John McCain — hell-bent for New Hampshire — stood his ground like a Granite Stater, shaming first-primary rival Mitt Romney on waterboarding, where McCain’s opposition is more New England-friendly. It was a rough night for Giuliani, who was peppered with the most attack questions (9/11 exploitation, possible shady billing of mayoral security expenses, rooting for the Red Sox as a Yankees fan) and seemed defensive all night, fumbling answers on the Bible and gun control. Even on offense, America’s Mayor ended up botching a hit on Mitt Romney’s immigration record. Romney gave his most succinct statement about his abortion flip-flop — “I was wrong” — and probably reassured a few more wary conservatives. Fred Thompson had some good laugh lines but failed to make much of an impression.

Huckabee in spotlight
Right now, Huckabee is the story, since he has now taken the lead in Iowa (at least the religiously conservative GOP caucus-going part of it). Although he’s vulnerable on taxes (he raised them in Arkansas, to fund education) and illegals (he gave scholarships to their kids), Huckabee deftly parried by noting that income taxes had not gone up while he was governor, and immigrant children received available education benefits: “We’re not going to punish a child because the parent committed a crime. That’s not what we typically do in this country.”

Those tripwires navigated, Huckabee proved smooth in a knife fight. When a Bible-wielding YouTuber stated, “How you answer this question will tell us everything we need to know about you. Do you believe every word of this book?” Giuliani, first up, stumbled. Huck, an ordained minister rushed in with “Do I need to help you out, Mayor?” before giving a surprisingly nuanced answer, noting, “It’s the word of revelation to us from God himself,” yet “as the only person here on the stage with a theology degree, there are parts of it I don’t fully comprehend and understand, because the Bible is a revelation of an infinite god, and no finite person is ever going to fully understand it. If they do, their god is too small.” (Romney also fumbled this question, especially deadly given his “Mormon problem” with the GOP religious base. He paused, ducked the “every word” part. That forced Cooper to pin him down; the gears were clearly grinding before Romney replied, “You know — yes, I believe it’s the word of God.”) Huckabee joked his way around question about whether Jesus would approve the death penalty, and advocated shooting Hillary Clinton to Mars.

Illegal immigration is the wedge issue the minority party hopes will propel them to the presidency; it is also potent in the still-fluid nomination fight. This morning’s headlines are dominated by Romney and Giuliani’s off-the-bat spat. Giuliani is hugely vulnerable on the issue, having supported many illegal-friendly policies (mostly on practical grounds) as mayor. His scripted response last night was to counterbalance this mile-high record with an anecdote about Romney running a “sanctuary mansion.” Although the details were never really explained, Romney used the “homeowner defense” that millions of Americans (including GOPers) can probably relate to: that he outsourced the work to a contractor, and couldn’t possibly vet all their workers.

“If you are a homeowner and you hire a company to come provide a service at your home — paint the home, put on the roof … If you hear someone with a funny accent, you, as a homeowner, are supposed to go out there and say, ‘I want to see your papers.’ Is that what you’re suggesting?”

At this point, I would swear I heard Romney get a dig in at Giuliani’s own “vetting problem” — the mayor’s recently indicted close pal, ex-Police Commissioner Bernard Kerik — though I can’t find that in the transcript. Expect to hear a lot more about that Bernie on the campaign trail if Giuliani’s mansion anecdote has legs.

‘Gotchas’ overshadowed news
Despite the second pass at novelty, the YouTube debate did not tell us much new beyond the gotchas. For Minnesotans living under a no-new-taxes pledge, Huckabee, Romney, Giuliani and Duncan Hunter said yes to a federal version (tax-hikers Huckabee and Giuliani apparently can regain their virginity here), while Paul, Thompson and McCain declined. All advocated spending restraint, but when specifics were brought up, Romney and Giuliani backed farm subsidies, Huckabee favored a bigger space program, and no one went near defense cuts. Among the front-runners, only generalities were offered: Giuliani would cut the federal workforce by 21 percent over 10 years; Romney would veto all earmarks (though it’s worth noting the president lacks a line-item veto). When entitlements came up, only Thompson (who has proposed trimming yearly retiree increases) addressed Social Security, whose funding problem pales in comparison to Medicare, which only he mentioned, unspecifically.

A question opposing waterboarding showcased Romney’s preoccupation with the GOP base. After Romney said he opposed torture, Cooper asked him if waterboarding constituted torture. Romney’s dodge was Bushian: “I don’t think it’s wise for us to describe specifically which measures we would and would not use” — as if there’s any terrorist in the world to whom waterboarding is a secret.

McCain then set Romney up with the old one-two.

McCain: Governor, I’m astonished that you haven’t found out what waterboarding is.

Romney: I know what waterboarding is, Senator.

Finally, a bit of the horse race: The libertarian Paul refused to go Shermanesque when asked if he would run as an independent. Paul called it a “tough question” and stated he had “no intention of doing this.” Given that libertarians typically draw more from the GOP’s base, Republican knees had to buckle a little bit at that.