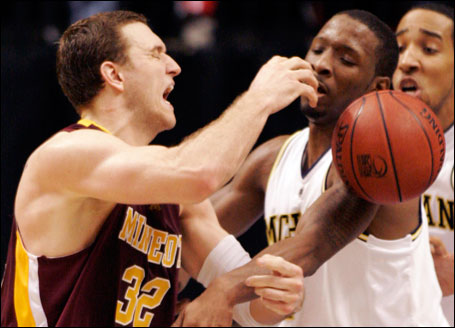 “I’ve had relations with girls from many nations
“I’ve made passes at women of all classes
“And just because you’re gay, I won’t turn you away…
“Sexuality – strong and warm and wild and free
“Sexuality – your laws do not apply to me.”
— Billy Bragg, “Sexuality”

Hey, did you hear the one about the Gopher male athlete who came out this year? You wouldn’t, if you only read the dailies and watched the local TV news.

Zach Puchtel is the Hopkins native who earned acclaim two seasons ago by walking onto the Gophers basketball team from the campus of Harvard University and becoming Big Ten Player of the Week. Everything about Puchtel — his goofy enthusiasm, his relentless work ethic, his return to Harvard, a post-graduate tryout with the NFL Chicago Bears — made him a fascinating and memorable guy.

And all that was before Sept. 17. That’s when Puchtel wrote on his “The Search” blog:

“As most of my good friends know, I came out of the closet nearly 6 months ago. Not only did I come out, but I made a public spectacle by doing it in the middle of a fashion show that I was involved in. Now, needless to say, it has been an eye-opening experience for me. More than anything, it’s made me come to realize the consequences of my actions. I hurt a number of people by doing what I did, but more importantly, I freed myself. I freed myself from a question that had lingered in my mind for years, freed myself from the internal scrutiny that was becoming nearly impossible to bear, and lastly freed myself from the fear of living….”

Pondering his NFL dreams, Puchtel added, “I believe that I was put on this earth to play football. This is my next goal, and I don’t see anything that can stop me. Narcissism and ego aside, the one problem that may arise is the issue of being gay. I am not gay. I am not straight. I am who I am. I am sexually attracted to men and women, and I enjoy being with women in intimate relationships. I think human beings are beautiful, and I try not to differentiate due to sex, race or any other minute detail. … I don’t know how this is going to work out. As far as I know, there has never been an openly gay (or recently announced gay) athlete in a major sport. It is important because I know who I am, and I want others to be able to feel comfortable in their own skin as well.”

About a month later, the local fan site gopherhole.com got wind of Puchtel’s post. Their interview — featuring his memorable “go big or go home” quote about coming out to 3,000 fashion show attendees — remains the only one Puchtel has done. On Oct. 26, Minnesota Monitor flagged the gopherhole interview, which is how I got wind of the story. My own bias — having covered raunchy, homophobic locker rooms for years — is to root for every athlete who comes out. The GLBT community has advanced as straight folks realize their neighbors, friends, family and co-workers are members. Top-tier men’s sports is a last bastion of pretend-all-straightness. Exploding that phoniness is another brick out of prejudice’s wall.

‘Old news’
So I sat back and waited for the major media coverage of Puchtel’s story. Weeks went by. Nothing. In a town where sports coverage features every athlete’s utterance, action and flatulence, this was even more stunning.

The “ick” factor didn’t seem likely. Everyone covered former Viking Esera Tuaolo’s coming out; perhaps Puchtel’s tacit bisexuality was too much for the local crowd? Could it be his relative youth? Maybe the whole blog-type thing somehow flew under their radar screens.

It turns out the dailies know all about what’s up. Dennis Brackin, the Strib’s assistant sports editor, says a Puchtel story was discussed in-house and any ick factor was no factor. One factor that was: timing. “By the time I saw the blog, it was old news,” Brackin explains. “Also, he was gone from our scene. If he had come out during his senior season at the U, it would’ve been big news.”

He adds that Puchtel didn’t meet the name-recognition threshold “where we said we had to jump out and do it.”

A final reason: staff cuts. Puchtel’s blog hit at a time when the Strib was buying out and transferring dozens of reporters. Gopher basketball writer Jeff Shelman moved to the news side, and Brackin was between correspondents. “I’ll be honest; our staffing is more in a spot where we have to pick and choose,” he allows.

Pioneer Press sports editor Mike Bass is more circumspect, saying that it would be unfair to his writers and a competitive disadvantage to discuss any news piece that might still be in the works. He clearly knew there was a story out there.

No more interviews
Neither editor mentioned Puchtel’s lack of cooperation, but earlier this week, Puchtel emailed me and confirmed he wasn’t talking about the details to the press. “No other interviews have been done,” he wrote. “I know how quickly the media can get a hold of something, turn it into whatever they want, and then spit you out like you never happened. I value my life too much to put myself through this ugly cycle, and so I chose to avoid any further interviews until a later time. I have been talking with a few members of the gay community in regards to other things, but for now, the interviews are on hold.”

Although older folks might question how a member of Generation Exhibitionist can blog all about it, then clam up when the questions come, it’s hard to blame the guy for wanting to control so personal a story. Puchtel’s generation is both more comfortable with sharing and more savvy about the media.

I mean, can you imagine if one of the TV stations gave this a whirl? (None have called, Puchtel says, not even WCCO, which did a piece on his Bears tryout.) One need not squint too hard to see Esme Murphy panting over some sort of lurid “expose” or perhaps a treacly KARE-11 treatment. God help me, I can’t get the voice of Ken Speake out of my head:

So do I think that the major media should tell us there’s a story out there even if Puchtel won’t do an interview? Yes; that’s why I’m writing this post.

Surely some notes jockey can tip readers to Puchtel’s blog — where he’s still wrestling with the feelings and consequences of his revelation. They’d help their vast audience find a particularly human tale, told by a particularly interesting fellow. They wouldn’t be “spoiling” a bigger story — in fact, they’d set the table for the day when the primary subject is ready to answer questions. There’s simply no reason for a total news blackout, especially with all the truly trivial junk that passes for sports news in this town.