A few months ago, I was cleaning out a basement closet when I pulled up some shelf paper. Underneath were six lovely Minneapolis Stars and Tribunes from Memorial Day week, 1975.

Being a newspaper geek, this accidental time capsule has provided endless moments of entertainment, which may be the subject of a future post. But the thing that struck me the most was a full-page “house ad” — promotional copy newspapers run to fill unsold space. Labeled “White House to your house,” it breathily began, “From an office three blocks away from the White House, these four members of the Minneapolis Tribune Washington Bureau work, full-time, to dig out what’s behind news from the nation’s capital. They work ONLY for the Tribune.”

I don’t know what struck me more — a house ad actually touting a paper’s news talent, or the scope of what they covered. Now, ad writers have been known to indulge in puffery, but check out these beats beyond Frank Wright’s White House slot: “Al McConagha focuses much of his expertise on the environment, foreign affairs.” “Findlay Lewis … watches congressional doings, Indian affairs, taxes.” “David Kuhn concentrates on Washington’s regulatory agencies, economics, education.” Regulatory agencies! Indian affairs! It’s enough to make a local newsie swoon. 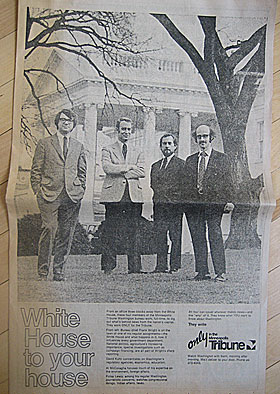 I don’t know what struck me more — a house ad actually touting a paper’s news talent, or the scope of what they covered. Now, ad writers have been known to indulge in puffery, but check out these beats beyond Frank Wright’s White House slot: “Al McConagha focuses much of his expertise on the environment, foreign affairs.” “Findlay Lewis … watches congressional doings, Indian affairs, taxes.” “David Kuhn concentrates on Washington’s regulatory agencies, economics, education.” Regulatory agencies! Indian affairs! It’s enough to make a local newsie swoon.

These days, of course, the staffed-up Washington bureau has gone the way of the leisure suit. The Strib has a sole reporter, Kevin Diaz, plus an intern. The Pioneer Press has nobody. The reasons are myriad. The Internet means people need your paper less for national news. Backyard news is your raison d’être, and cratering ad revenue is your daily reality, so you cannibalize Washington salaries for suburban rookies. And even though you need some national component, you mostly off-shore coverage to the plugged-in talent at The New York Times.

It’s horrible, of course, since so much of what Washington does reverberates locally. A regulatory rule change can punish Minnesota governments and the Minnesotans who depend on them, but one Washington reporter and a wage slave can’t possibly get in front of that while tracking two U.S. senators, eight local congresspeople and any other headline-of-the-moment. Indian affairs? The environment? Anything else nefarious brewing in the tunnels of D.C.? You’d better hope it spreads so wide that The New York Times sniffs it.

The Monitor, along with sites in Colorado, Iowa and Michigan, is funded by the Center for Independent Media. CIM relies on foundation support and swings from the left side of the plate, though President and CEO David Bennahum clings to the “independent” label firmly enough — they’re fair if not balanced — to name his new site the Washington Independent. Bennahum plans a bureau of 11 or 12 people — three full-timers and eight or nine part-timers with “a number of core competencies,” he says.

“The first order is to cover those state delegations” where CIM has local sites, Bennahum explains. “We’ll have a specific person whose beat is to follow each delegation, but also specific people who are issue-driven.” The issue beats include national security, Social Security, immigration, middle-class finance, religion and politics, the politicization of government at all levels with ideologues and the growing environmental influence on policymaking. The leadership has big-time media and online cred. Former New York Times editor and Charlie Rose producer Allison Silver will run the shop and ex-Talking Points Memo reporter Laura McGann is the No. 2. Former Washington Post editor Jefferson Morley directs CIM’s national efforts.

More sites planned
The CIM move won’t singlehandedly replace Minnesota’s lost D.C. journalists, and there are some important limitations. For example, there’s no guarantee the reporter hired to follow Minnesotans has ever set foot in the state — a real plus for state-specific coverage — though Bennahum notes that Minnesota Monitor staffers will help direct coverage. For another, he’s not sure if the state’s reporter will be a full-timer or a part-timer, and the full-timers will have other demands. (MinnPost’s D.C. guy, Adam Graham-Silverman, is a native but posts around a full-time job at Congressional Quarterly.) On the other hand, the Washington Independent’s “issue-based” journalists can kick in stories with a local focus to buttress the coverage.

Another worry: CIM plans to launch two more state sites in the first quarter of ’08, and their growth could water down the focus on any individual location such as Minnesota. For my part, I hope the site goes beyond the ever-juicy politics swirling around Minnesota’s congressional menagerie to focus on the real policies that affect real people.

Caveats aside, CIM’s move is more than lighting a candle in the darkness; it’s the necessary future arriving. The for-profit locals have decided D.C. doesn’t pay, but the need for locally relevant national coverage hasn’t diminished. Thirty years from now, let’s hope some accidental archivist reads this with nostalgia for what began, not for what was lost.