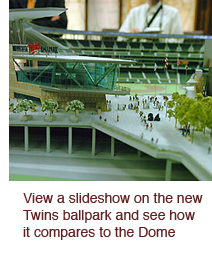 That last line captured my imagination. You see, I’m a ballpark geek. For a while, I helped run Ballpark Tours, an outgrowth of the old “Save the Met” crew. We were so peeved about hermetically sealed baseball that we arranged trips to where the grass still grows and you don’t have to see a chiropractor after sitting down the third-base line.

After countless journeys, I have strong opinions about new ballparks as places to watch a ballgame. And as much as I appreciated Souhan’s sentiments, I possess a moral advantage when passing judgment: I pay for my tickets. Having been a sportswriter, I know it’s easy to go gooey when you rarely fork over your own dollars. What follows is a more detailed look at the new park, with other interesting comparisons to the Dome that Twins fans know and (mostly) loathe. 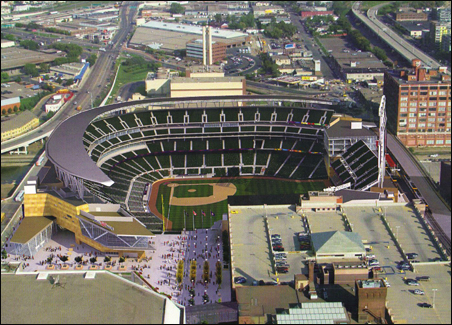 The Minnesota Twins use this postcard of the new stadium to woo potential ticket-holders.

Any comparison between the new park and the Dome must acknowledge these specific advantages:

Legroom: The Dome’s airplane-like squeeze factor is 31 inches; the new park’s minimum is 33. The priciest lower-deck seats and the club level will have a roomy 36 or 39 inches of stretch. (Premium seats will also be wider: 20-22 inches, compared to the Dome’s 19 inches, which is also the new ballpark’s standard. Only the new left-field seats come in narrower, at 18 inches.)

Row width: One of the Dome’s major bummers; at its worst, rows are 37 seats wide, creating knee-banging journeys if you’re in a middle seat, or a lot of up-and-down at the ends. The longest row in the new park is 24 seats, and most rows are considerably shorter.

Amenities: Concourses that are twice as wide, open to the field, and allow you to circle the ballpark; plentiful bathrooms (double the Dome’s for two-thirds the seating capacity) and lots of bars and restaurants.

And of course, I also must acknowledge the stadium’s public financing: many of you remain as angry about that as my Save the Met buddies are about the Metrodome. I sympathize; I know what it feels like when all you’re left with is a boycott. Still, the new ballpark is a reality, and this is for all the fans who will step inside.