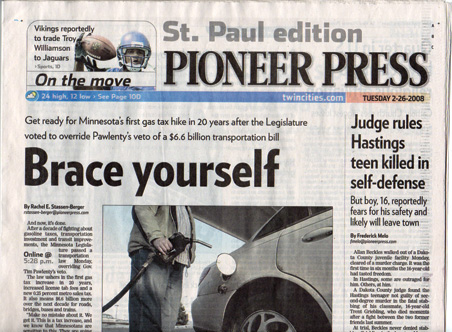 Today readers of the Pioneer Press noticed their paper had a new look. Here‘s a good front-page before and after. (Hat tip to Bob Collins at NewsCut.) The paper did not change its text size or typeface, and kept its organization the same. However, the PiPress is reducing the page width (a trend among papers nationwide; editor Thom Fladung says the news hole won’t shrink), changing headline styles and adding other visual elements.

When it comes to judging these things, Brauer’s Law of Redesign applies: no verdict is a keeper until at least three months; most people are reflexively resistant to change. You’ll know better when you pick up the paper and you no longer think about it being redesigned.

• God bless the PiPress for getting rid of my personal bugaboo: the supermodel-thin headline type for one-column stories. It was just unreadable. The new sans-serif headline font is far cleaner and comprehensible, although there’s a Star Trek version in Sports that’s odd-looking. On the paper’s website, some readers commented that the new headline font screams “suburban weekly,” but the PiPress has a real challenge cramming as much news as possible into fewer pages. The old headline type was a compromise too far; with the news style, letters go together to make words, not weird black modern art.

• The cleaner headline fonts clash with the status-quo serif story text, which looks even grimier than before.

• The web tail is clearly wagging the print dog. On every section front (except the front page), “twincities.com” is bigger than “St. Paul Pioneer Press.” One of the redesign’s truly stupid features is a timestamp notched into the lead story that, in today’s case, reads “Online @ 5:28 p.m.” I suppose it’s a cloddish attempt to get you thinking website, but I agree with Collins: all it makes me think of is “old news.”

• Although the first-day front-page headline — “Brace yourself” — is unduly sensational and editorial (it’s a $50-$100 annual gas tax hike for most of us, not Hurricane Andrew), there’s nice design work in the cost chart. It showcases the virtues of print and the new design’s possibilities.

• In a paper where space for content is tight, some things seem too large: each word of two-word headlines on a story’s jump page has its own line, which wipes out three or four lines of copy — not pretty, and not helpful when reporters already have trouble getting words in the paper. Related: “pull quotes” — those bigger, bolded quotes pulled from the story to break up body copy — are too long and don’t really register; they should be shortened or dumped.

• Fladung notes that sections (Sports, Business, Local, Daily Life) are now color-coded, but because there’s not much color used, it doesn’t really register. Also: dark blue for Local and light blue for Daily Life? Do they only have half a color wheel over there?

• The crossword puzzle seems gigantic (good) but they make the comics look puny. Individual comics are smaller than the Strib’s, and since some days the comics are about the only thing I haven’t read on the web, this seems like the wrong way to go if you want to keep print alive. (By day’s end, Fladung noted the crossword puzzle will be reconfigured, though the effect on the comics is unclear.)

The scrappy underdog has never been the Twin Cities’ best-looking paper, but I think on balance it’s an easier read today than it was yesterday.