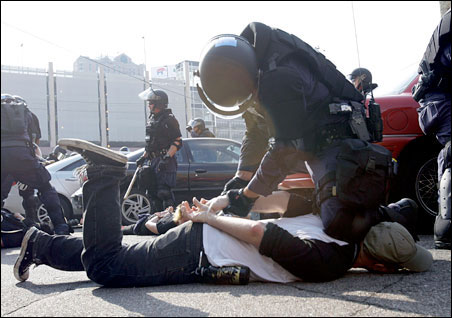 The last image found in Matt Rourke’s camera before he was hauled off. (Click here for larger photo.)

Matt Rourke isn’t a lefty media star like Democracy Now’s Amy Goodman. The AP photographer’s Monday arrest didn’t provoke paroxysms of online outrage; there was no sympathy-generating video as in Goodman’s case. Unmobbed by interview requests, Rourke quietly returned to work Tuesday after being let out of jail at 2:30 that morning.

But Rourke’s story is in some ways more outrageous and more amazing than Goodman’s seizure. It is also more typical of the dangers working journalists — particularly photojournalists — face covering demonstrations.

The story culminates with the stunning photo above — bigger version here — a testimony to Rourke’s resourcefulness and tenacity. It was the last image found in his camera before he was hauled off. It was taken after someone jumped him from the rear.

“I was rolling around, found my camera and was shooting from my back,” says Rourke.

It’s hard not to look at the photo and see why police might’ve wanted to end Rourke’s day. The 32-year-old Philadelphia-based photographer — under AP orders to recount facts, not offer opinions — says this: “I don’t know who or what took me down from behind.”

Rourke says he was trying to stay abreast of a protest crowd when the police surrounded the group in a parking lot. “I was in a passive posture, and the officers in front were appearing to let me go” just before the takedown, he notes.

Rourke was bedecked with press identification: He wore his credentials, had an AP hat clipped to his chest (because he was wearing a gas mask) and had two big cameras marked “press.” The get-up, which included a standard photographer’s vest, may have had an unexpected vulnerability: It’s possible none of the identification was visible from behind.

Police also ignored Goodman’s credentials, but in the video, she can be seen disobeying police instructions as she tries to break through a line and reach bloodied colleagues. (You can understand Goodman’s justification if you look at this less-viewed clip shot by her producer, Nicole Salazar, just before Salazar was arrested.)

Rourke says police gave him no instructions — no command to stop shooting, no orders to leave the area. “It was sheer madness,” he states.

Rourke wound up being zip-tied anyway, just like Goodman.

“Every time I spoke to an officer, I said I was an AP photographer with credentials,” he recounts. “I couldn’t tell where the uniforms were from, they were covered by [riot gear] turtle suits. I asked if I could give my coworkers my equipment. They agreed to it. When they flexicuffed me, they had to disconnect my camera.”

Rourke told the National Press Photographers Association that a New York Times has a photo of him, on his back, flashing his credential to police. (I’m trying to get the photo.)

Rourke also had the sense officers — whom records indicate were from Maplewood — regretted the bust almost immediately.

Rourke’s boss, AP Director of Photography Santiago Lyon, isn’t on opinion lockdown. Via email, he states, “It is unacceptable for a working, credentialed photojournalist to be detained in the manner that AP Photographer Matt Rourke was on Sept 1, 2008 in St. Paul. Upon ascertaining his status as a journalist, police should have released him immediately.”

Rourke says he was freed because AP “put the whole weight of the company behind me.” He was aided by the Reporters Committee for Freedom of the Press, which had worked with authorities weeks in advance to establish procedures to free credentialed journalists. (Goodman’s less-prominent team, which did not contact RCFP according to Executive Director Lucy Dalglish, still faces felony riot charges.)

Dalglish says it’s no surprise a guy like Rourke was pinched. “We knew, when we set this up, that photographers in particular are likelier to get picked. It’s their job to get in there, get photographs, but if they back up and step on a cop’s big toe, they’re going to get arrested.”

Rourke, in fact, took a shot of another photographer later arrested for felony riot; you can see that image here.

Rourke, who says he has a scraped elbow and knee as battle scars, says he has never experienced anything like Monday’s assault. “I’ve been detained before, but never forceably. Katrina was as bad as it got up until [Monday]. They’d just kind of temporarily detain you, post-9/11 stuff, asking you why you were photographing an oil refinery, taking your license and letting you go back to work quickly.”

In the end, authorities recognized their errors. Phil Carruthers, the Ramsey County attorney’s office division director, told AP that no charges against Rourke were anticipated.