As of this posting, the Strib has not published anything about the Texas lawsuit alleging a major Norm Coleman donor and trip-bankroller sought to funnel corporate cash to Coleman’s wife, Laurie. This despite a rather operatic display of reportorial tenacity by the paper’s Paul McEnroe yesterday.

But the news has broken on the paper’s website in — where else? — the comments. Here’s a screen grab of the top comment in the Strib’s story about Coleman suing Al Franken for allegedly deceptive ads: 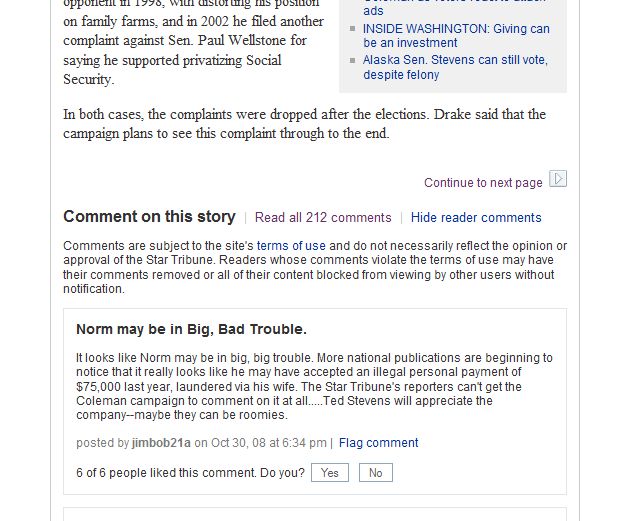 By the way, Minnesota Independent’s Steve Perry writes that the Strib “needs to tell the story,” but both dailies, MPR and local TV have stayed away from the tale even after the Texas filing emerged all over the Internet this afternoon.

My guess is there are a lot of interesting discussions going on in newsrooms this evening.

Update: WCCO’s Esme Murphy is blogging about the case here. She notes the document showing the suit was withdrawn “without prejudice” — meaning it can be refiled — lacks a court stamp. She adds that a Houston court clerk told her twice today the suit had, contrary to Coleman campaign manager Cullen Sheehan’s claims, not been withdrawn and was active.

“The timing of this lawsuit just days before the election is troubling, but so too are the assurances that the lawsuit no longer existed, when in fact it is on public file for anyone to see,” Murphy writes.

Update #2: The PiPress’ Rachel Stassen Berger has blogged today’s details in Political Animal. (She was the first local journalist to reference the suit yesterday.) I’m not confident you’ll see anything in tomorrow’s paper, but it’s an open question.