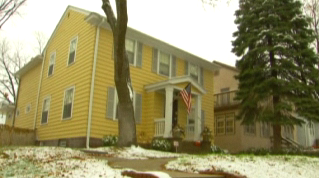 Coleman, who would not be interviewed, shared project billing records. They showed he paid his builders the full $414,000 by remortgaging his St. Paul home for $775,000. According to the report, “The senator acknowledges that like a lot of people in America, he now owes more on his home than it’s actually worth.”

Things to keep in mind: Kazeminy is the target of two lawsuits alleging misuse of corporate funds, but the evidence has not been vetted in court. FBI agents have begun interviewing officials of the Texas company involved, but no charges have been filed. Coleman has denied any knowledge of the unproven scheme and no links to him have been established.

While the Fox9 story “raises questions” connecting the renovation to the potential scandal, the web version includes no explicit comment from Coleman or a spokesperson on the alleged link.

According to Opensecrets.org, in 2006, as the renovation project was beginning, Coleman was the 19th-poorest member of the Senate, with assets of $564,305 and liabilities of between $15,000 and $50,000. The totals include income and investments, but not homes or mortgages.

The 2006 and 2007 reports list Laurie Coleman’s employer as Hays Co., the alleged middleman in the Kazeminy-to-Coleman claims; a column for Laurie Coleman’s income is left blank on both reports. Norm Coleman’s Senate salary is $180,000 according to Fox9.

Fox9 reporter Tom Lyden also says Coleman’s kitchen — where an early campaign commercial was filmed — was renovated by a contributor. There are echoes of Ted Stevens in that; the Alaska Senator was convicted of not reporting below-market renovations from a donor/contractor. Lyden says the contributor received a $33,000 fee; there’s no proof Coleman got a deal that he had an unmet obligation to report.