Readers sometimes ask why I focus so much on newspapers, especially the Star Tribune. The explanation that satisfies most is that papers have the biggest newsrooms and usually set the local news agenda.

But in strictly numerical terms, how many more bodies do they put on the streets? And at the top of the metro pyramid, how dominant is the Strib?

The chart below is my first whack at the questions. There are a number of caveats that I’ll discuss below; the biggest is that this only measures staff reporters. 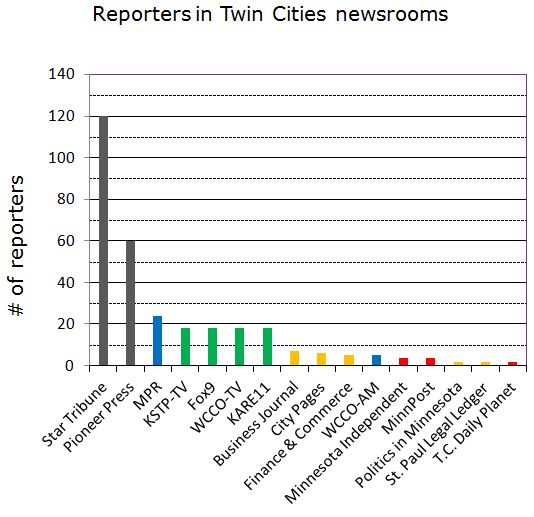 As you can see, the Strib, even in its bankrupt, bought-out state, towers above the landscape. Twice as many newsgatherers as the PiPress (120 to 60), five times as many as third-place MPR, six times more than any individual TV station, etc.

The color bars reflect media type: gray for newspapers, blue for radio, green for TV, orange for non-daily papers and red for online only. (While everyone competes in the online sphere, I’m using their legacy roots for now.) For space reasons, I didn’t include monthlies, or non-metrowide outlets like community papers.

About those caveats: Why am I only measuring reporters, and not everyone in the newsroom — editors, producers, photographers, design-production folks, etc.?

Because it was the only consistent data I could get. Most organizations clammed up when I asked for details, claiming trade secrets. Fortunately, they list their supersecret reporter data on their websites. Because other categories (such as producers and photojournalists) aren’t there, this was the only apples-to-apples I could do.

TV news directors were especially squirrelly, so I averaged out small variations in their crews and gave everyone the same headcount. Each station got credit for three additional positions because field producers do more reporting than newspaper editors.

(Disputations welcome at the email address in the right-hand column, especially from you managers who were shy the first time.)

Also for consistency, I did not include freelancers. This hurts organizations that depend more on them — for example, MinnPost and City Pages. Such is life.

Finally, I counted news, sports, arts and feature reporters but not, say, weathercasters and traffic reporters. This is strictly headcount, and doesn’t account for reporting quality. And I did not count unaffiliated Twin Cities newsbloggers, although they definitely add to the info stew.

So anyway, back to the point. How dominant are newspapers compared to other local media? The pie chart below is by type: 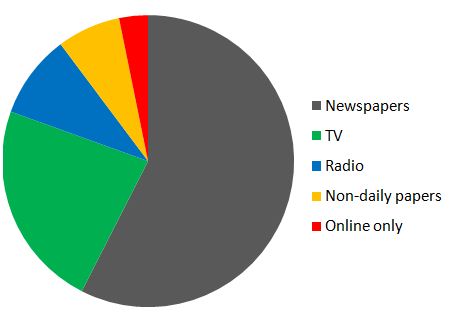 By the way, this adds up to 313 newsgatherers overall, at least by the above definition.

And just to make it clear that our poor, embattled newspapers still employ a majority of local staff reporters, here’s that boil-down: 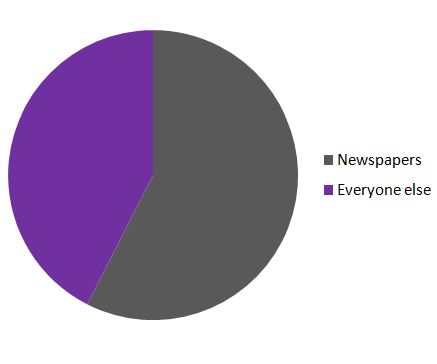 The numbers pump up the print dailies (I hope Strib publisher Chris Harte doesn’t use this as an excuse to cut into his big lead), but don’t break out online reporters within traditional outlets. That obscures a big part of local news evolution.

But it does beg the question, what will these graphs look like in a year? This parlor game has so many scenarios. For example:

The big tree falls. If the Strib goes under (very unlikely) or we become a one-newspapers town (more likely), how many of those 180 “print” reporters would we lose? Thirty? Sixty? A hundred? That turns out to be 10, 19 and 32 percent of our corps, respectively. (Again, no accounting for quality.)

The steady bleed. This one’s the front-runner at the moment: Everyone survives, but everyone’s headcount shrinks. No real change in positioning, though online adapters do better.

Winners and losers. Some segment does markedly better than another. Newspapers figure out the web and stabilize without much additional carnage. Online-only blossoms, perhaps through individual, entrepreneurial reporter/bloggers. In all likelihood, though, reporting numbers shrink.

Anyway, you’ve got current data to get you started, subject to revision after disputations. I welcome futurists and bettors’ comments below.