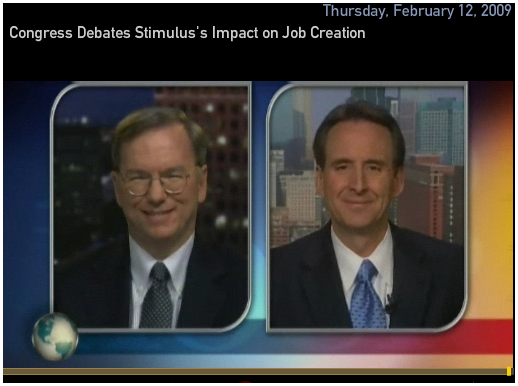 Apparently, it’s harder to dissemble on PBS than it is on Fox News.

Thursday, Gov. Tim Pawlenty met his match on the News Hour as he faced off over the stimulus bill with Google CEO Eric Schmidt. Pawlenty, armed with the sort of talking points Sean Hannity laps up, was calmly dismantled by Schmidt when alleging hot-button issues remained in the legislation.

The money part starts about ten minutes into this video, with the pertinent transcript below:

GOV. TIM PAWLENTY: … I’m not saying that all of this bill is bad ideas. We’re just talking about the fact that some of it is really not immediately stimulative. And if we want to debate, for example, STDs or smoking cessation or health care reform, those are good and legitimate issues, but probably should be handled in a separate bill, particularly when you’re trying to get bipartisan buy-in. And that’s one of the main objections.

NEWS HOUR HOST JUDY WOODRUFF: Eric Schmidt, how do you respond to that criticism?

ERIC SCHMIDT: Well, I actually agree with the governor, and those issues were actually taken out of the bill in conference. And now, in fact, the bill does not include most of those facilities.

Whether by ignorance or design, Pawlenty is often undone by old scripts, such as when he kept spreading the U.S. Senate car-ballot fiction after it was debunked. Woodruff does a good job busting the bromides.

On some level, the private-sector-worshiping Pawlenty is at a disadvantage debating a businessperson, rather than a Democratic politician. Still, throughout the 10-minute conversation (which starts at about the 4:30 mark of the video), Schmidt appears to be the chief executive more in command.