How good was the election for Minnesota Public Radio? Its news station, KNOW-FM, racked up its highest total audience (“cume”) ever in Fall 2008, according to Arbitron ratings data. And for good measure, the news side’s “AQH” — the number of listeners in any given 15-minute bloc — was the second-highest ever.

A company email touting these facts gave me a good excuse to look at how MPR listenership has tracked in the last few quarters — not just for news, but also Classical (KSJN-FM) and The Current (KCMP-FM).

MPR’s research staff supplied the data, which measures the broadest category: “12+” listenership, or folks ages 12 or older tuning in between 6 a.m. and midnight. (Commercial stations often focus on the more ad-friendly 25-54 category, but let’s not age discriminate for the moment.) I made the primitive Excel graphs. 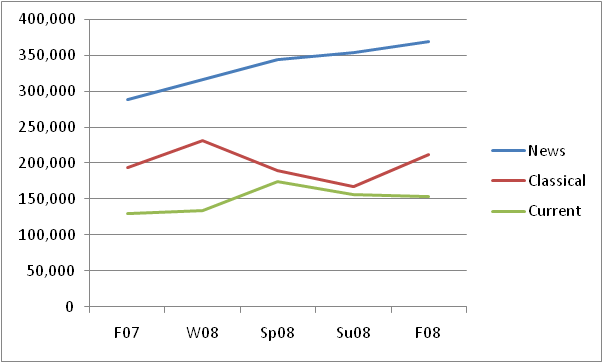 You can see the steady 2008 growth for News; The Current almost overtook Classical this summer but fell back. Still, The Current seems to have stabilized at a higher level after tightening its playlist in recent months.

To get your bearings, in the Fall ’08, KNOW ranks fifth overall among Twin Cities stations, a position it’s held for a year. Classical ranks 16th, at the low end of its 12th-to-17th range, while The Current is 19th, more or less where it’s been.

Next up, the share of metro radio listeners tuning to MPR: 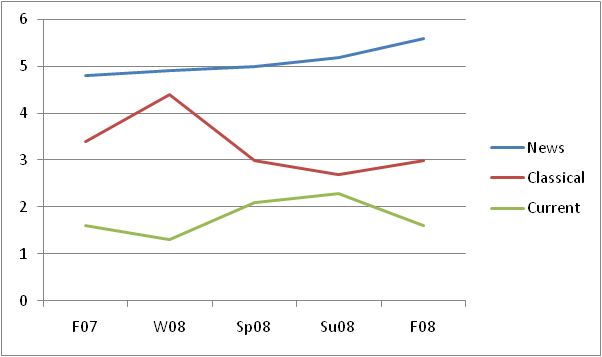 Overall, this means about 10 percent of Twin Cities listeners have an MPR station on at any given time. News gained share, Classical fell and The Current is about where it was a year ago.

Now, a less-publicized measure, TSL, or Time Spent Listening, in hours per listener each week: 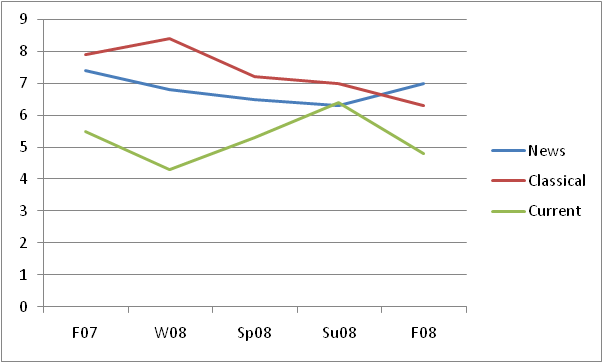 I always assumed Classical listeners were the ones who never flipped the dial, but News — which briefly ranked last among the three stations this summer — was first by fall.

I can’t help wondering if Classical and The Current’s drop reflect listeners turning more to news in the election’s final days.

Radio-heads, please feel free to weigh in with your own interpretations.

MPR: How big is its audience?