The Strib’s own story buries the lede, noting that Channel 4’s meterological team will take over the Strib’s back-page weathercast. On some level, it’s the second time in a year WCCO has cost Mr. Douglas a job.

Observers have long wondered when the Strib would partner with a TV station. The piece intriguingly alludes to “a partnership that begins today with weather news and will extend to other news, joint advertising sales and promotion.” 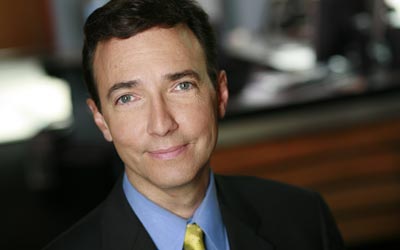 The “other news” component will raise eyebrows, but for now this seems all about weather, which generates monster pageviews for TV websites.

Says WCCO spokeswoman Kiki Rosatti, “Right now, we’re not even specific [about] news. This partnership is going to launch with the weather component, because weather is something we’ve rebranded and refocused and put a lot of our energy into. This relationship with the Strib is taking this ‘lifestyle weather’ to the next step, above and beyond what we’d get on a daily basis with our newscast and our webcast. In the near future, our hope is that we would have weather updates on wcco.com and startribune.com.”

While the partnership makes sense, neither organization is coming in strong. The Strib is obviously suffering in the current advertising depression, and local TV news isn’t in great shape either. Joint sales and promotion are all about increased revenues, but while shared content may never extend beyond the weather map, both newsrooms will fret over job-cutting “efficiencies.”

By the way, both operations are unionized.

Back to weather for a second: Douglas was a popular but polarizing figure with WCCO’s audience, in part because of his strong and oft-stated belief in global warming. The newspaper will be switching to a team that includes Mike Fairbourne — whose global warming skepticism was amply chronicled by the Strib last May.

I’m willing to bet Fairbourne will write less about his views than Douglas did.

Update II: One obvious thing I should’ve mentioned: at a time when the Strib needs all the cash it can get, it saves whatever it was paying Douglas, since the ‘CCO crew will work for free. By the way, he’d been doing the back-page gig for 16 years.

I’m also reminded Douglas was the flash point of an epic legal battle between the Strib and its newsroom union. In a case that went all the way to the Eighth Circuit Court of Appeals, the union beat back management’s attempts to have Douglas write stories for the paper’s A and B sections. The initiative violated labor contract rules limiting use of freelancers. There might be a bit of schadenfreude in the Strib’s newsroom today.