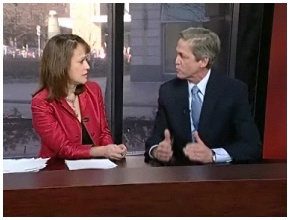 In a late-campaign YouTube-worthy moment, the Strib duo had been shown scampering after the senator after a St. Cloud event, asking about allegedly illicit payments that I now call DonorGate. The reporters’ efforts were in vain — though Coleman implies “vain” has multiple meanings here.

“That could have been a quiet story,” Coleman told Murphy. “Instead you had two reporters in front of cameras confront a candidate on something they could have had a quiet conversation about if that was the purpose.”

In his unctuous way, Coleman implied the Strib was in cahoots with the DFL, whose tracker taped the event and uploaded the video; the footage later appeared in a TV commercial. Murphy calls Coleman on that, but he insists the reporters wouldn’t have “put themselves there” had they handled themselves more professionally.

Having covered the Coleman campaign a bit, I was willing to bet St. Cloud wasn’t the first time McEnroe and Kennedy tried to get their questions answered. During the campaign, the Colemanistas were infamous for refusing to acknowledge reporters they saw as unfriendly, even when the questions were far more pedestrian.

It was a strategy that, though obnoxious, frankly worked — right up until it didn’t. The Coleman campaign became so attached to stonewalling that it made a bad story terrible, turning a complex lawsuit into a devastatingly simple video clip. If the St. Cloud set-to became Norm Coleman’s “Macaca” moment, it was of his own making.

I emailed McEnroe and Kennedy for their version of events; here’s a detailed recounting of “pre-camera” attempts:

First, Esme Murphy is to be commended for correcting Sen. Coleman’s claims that we inserted ourselves into a campaign ad that aired showing us trying to ask him questions regarding the lawsuit. We made every attempt to have a “conversation,” as the senator put it, but we were continually stonewalled by his staff in the days prior to our attempt to talk to him during his campaign stop in St. Cloud.

Our calendars and notes show the following:

We started calling the Coleman staff on [Monday] Oct. 27th in an attempt to get comment from the senator about the lawsuit. We contacted Megan Turnell, a staffer. We told her we needed to speak with Sen. Coleman. At some point she said that someone would be getting back to us. We waited. And then we waited some more.

On [Tuesday] Oct. 28th, we continued to make calls and expanded beyond Turnell because we were not getting any response. Then, between 4 p.m. and 6 p.m. that day, we left a phone message with at least two, if not three, people close to Coleman. Those people included Tom Steward, his press secretary who had months earlier facilitated an interview with Coleman regarding the relationship of Nasser Kazeminy. We also again contacted Turnell.

We made it clear in those calls that unless we heard back from someone, we would have to ask our questions about the Kazeminy suit while the senator was making a campaign stop. Glenn Howatt, our colleague in the investigative reporting unit, heard the phone calls. The calls were made by Kennedy and they were polite, professional and non-threatening. There was full disclosure of our need to talk with the senator about an important story we were reporting.

You have to remember the last thing we would want to do, given the nature of our work, is to ask these questions in public because we had this exclusively and didn’t want to alert other reporters. When we got to work on the morning of Wednesday, Oct. 29th, there were no messages or emails — not even a no comment — from Coleman’ staff.

When we arrived in St. Cloud on Oct. 29th, about an hour before Coleman’s lunch stop at the Holiday Inn, we signed in and made it clear to the senator’s advance man that we needed to talk to the senator. When the “Hope Express” arrived, one of Coleman’s staffers confronted us and told us that the senator would not be taking any questions before, during and after his remarks.

(We found it interesting that Gov. Pawlenty, also in the entourage, walked up to us, greeted us pleasantly.)

McEnroe politely told the staffer we would like to talk to the senator. Instead, he “babysat” us, sitting next to us during the senator’s remarks and then tried to block us from getting to senator as he departed.

Kennedy was physically blocked by one of the senator’s security guards as the senator walked briskly to his vehicle.

We tried to ask the senator to respond to the questions we had but he wouldn’t even roll down his window. His staff drove him away and when the news media filtered away, he returned to confront us.

Coleman accused us of “ambushing” him and we corrected him, telling him repeatedly of our attempts to get ahold of him and that he should ask his communications staff to explain why he wasn’t informed. The video Sen. Coleman refers to speaks for itself. We tried to do our job in a professional manner.

We believe the senator, in his interview with Ms. Murphy, misrepresented the facts.