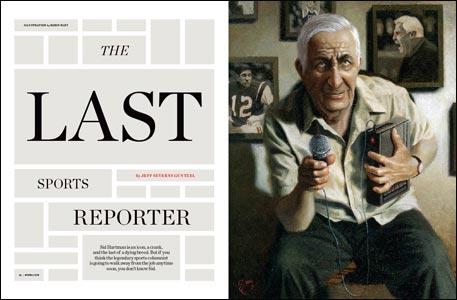 Within the ever-growing circle of alt-weekly alumni, there’s been much chatter about ex-City Pages writer Jeff Severns Guntzel’s pursuit of Sid Hartman.

Deployed by Minnesota Monthly to profile the 89-year-old icon, Severns Guntzel took to it with the hollow-eyed zest of Ahab pursuing a white whale. He would IM from the bowels of the Minnesota Historical Society as he cranked through Hartman’s North High yearbooks. For months, there were tweets from yet another pressbox as he espied the octogenarian’s schmooze. One winter day, Severns Guntzel crowed about sitting in the WCCO-AM studios watching “Sports Huddle.”

“He’s kinda scary they way he gets into researching,” a fellow pal confided. “Will he ever be able to get all this down on paper?”

Somehow, he did. “The Last Sports Reporter” is available for public consumption, and while Sid’s indefatigably is an oft-told tale, Guntzel hooks you right away by copping to his own mania:

Sid has been in the public eye—as a radio host, as a TV personality, and as a news­paper reporter and marquee columnist—for more than 60 years, yet he does not make things easy on anyone who attempts to understand his world: where he comes from, how he does his job, or why, at 89, he continues to do it at all. This is not just because of his infamous irritability. Quite simply, he does not like to be pinned down. I had been trying to talk to him for weeks, to get him to sit and answer the most basic of questions. But whether I called him at his home, or got him on the phone at his Star Tribune office, he would always say the same thing: “This week is really busy. Let’s schedule something next week.” But then the next week would come and go, and … nothing.

I had all but convinced myself he was running out the clock, putting me off until I had no choice but to do the story without him. So I decided to do something I thought Sid might appreciate, even respect. I would out-Sid Sid. I wouldn’t take no for an answer. I would not go away. I would hound a man who had made a career of hounding people. And so I followed Sid everywhere: to games, to news conferences, inside press boxes.

I shadowed him as he shuffled from one end of one locker room to another, as he shook a team owner’s hand, and as he dodged the distended, naked backside of an oblivious lineman. Then, one day, I got a call from Chad. “My father wants to make himself available,” he said. “Tonight. Can you come to my house?”

It’s a great read — though because of Sid’s advanced age and declining influence, the piece is mellower than the biting profiles cranked when Hartman’s water-carrying seemed truly dangerous. (Though you’d be forgiven if you thought the guy in the illustration was a pedophile.)

Anyway, all that time in the archives produces a perfect prequel to the thousands of entertaining, infuriating columns that have come since:

… he’d already done the work of a newspaperman in room 308 at Lincoln Junior High in north Minneapolis. He was sports editor and a columnist for the Lincoln Life student paper. The column, “Punts: Lincoln Life Pickups and Sports Bits by Sidney Hartman,” was situated among stories like “Cooking Classes Study Diets for Families on Relief” and “Minstrel Show Promises to Be Splendid Entertainment,” but Sid’s style even then would be recognizable to current readers. “If the rumor that the Physical Education Department and the swimming pools of all city schools are to be closed comes true,” Sid wrote in 1935, with the same mix of dire prophesy and wild speculation that he employs today, “it will not be with the consent of the students. This will probably mean the removal of all interscholastic competition in city high schools.”

He learned early the value of a well-placed source, the need to establish and maintain confidences. “Don’t be surprised if John Deno is promoted to a coaching position in the near future,” he wrote in one Lincoln Life column. Sid had every reason to flatter Deno. It was Deno who gave Sid the keys to the gym at lunch hour where he and his friends would shoot baskets and bet whatever money they had on the outcome. It was Deno who was one of Sid’s coaches. Most significantly, it was Deno who read Sid’s columns and told him, “This is what you should do for a living.”

The man who ‘out-Sid’ Sid Hartman