[Update: The Good Morning America update is posted here. Apparently, neck chains with crosses — nearly as ubiquitous as smiley faces — are now part of the picture.]

Since Kristi Piehl broke the “Smiley Face Killers” story last May, she lost her job as KSTP-TV’s investigative reporter. But ABC’s “Good Morning America” doesn’t know how to quit her.

Piehl will be on GMA Monday at 7 a.m., the Hutchinson Leader reports, touting a “new direction” for the lurid and dubious tale of serial killers roaming the Midwest, dispatching up to 70 young men whose bodies have never been found. 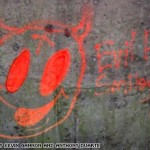 Authorities have repeatedly checked out the theory, spun by two retired ex-New York cops, and found it wanting. In Minneapolis, police rejected links to the well-publicized Chris Jenkins disappearance. The FBI says there is no proof a killer or killers are at work: “The vast majority of these instances appear to be alcohol-related drownings.”

In a memorable takedown, then-Minnesota Monitor staffer Steve Perry flayed the story, writing, “Let the record show that Kristi Piehl of KSTP has done her part to bring the yarn to the huddled masses yearning to breathe the vapors of another massive conspiracy.” Over at Mpls.St.Paul, Brian Lambert wrote that the theory, “Boggles … every rational instinct.”

Nevertheless, this is the sort of “unsolved” situation that grieving parents can’t quit, and TV news can’t either. In fact, Piehl has officially joined the two: since leaving Channel 5, she and the father of a possible victim have started a website, sfkillers.com. According to the site, working the smiley face cases is now Piehl’s full-time job.

Tune in Monday, if you dare, to see whether Piehl’s new cottage industry remains a house of cards.

By the way, it will be fun to see how KSTP’s local newscasts play a network story from someone they just let go.

The return of the Smiley Face Killer