As promised earlier today, here are the Scarborough Research market penetration numbers for the Strib and PiPress.

To recap: Scarborough’s survey says 77 percent of Twin Cities adults read a newspaper or went to a paper’s website in a given seven-day period. Encouraging! However, that top-line number didn’t break out individual papers.

As you might expect in a two-paper market with distinct coverage zones, neither local daily came close to the 77 percent mark. The Strib print-plus-web clocked in at 51 percent, and the Pioneer Press — which, remember, concentrates on Dakota, Washington and Ramsey counties — plus twincities.com came in at 28 percent.

A couple of interesting trends jump out from five-year data, however:

1. Despite the ballyhooed reader shift to online, neither paper has significantly increased local web-only market penetration from 2005 and 2009, at least according to the Scarborough numbers. The Strib has hovered around 13 percent; twincities.com is about 5 percent. Again, this is metro adults only.

Although my numbers don’t go back before 2005, I’d wager that’s the first time in decades fewer than half of Twin Cities adults looked at the print Strib in any given week. More significantly: those lost local print readers aren’t necessarily being replaced online. If trends continue, fewer than half of Twin Cities adults will see the Strib in print or on the web in any given week.

Here’s a chart that shows you the trends: 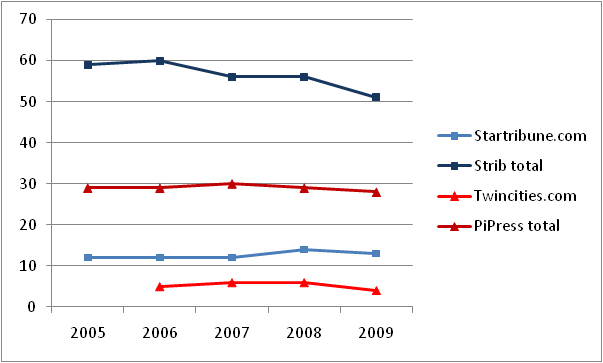 (Scarborough didn’t break out PiPress print and online numbers in 2005, which is why that data is missing.)

The variation in everything but Strib print-only is inconsequential. But here’s print specifically: 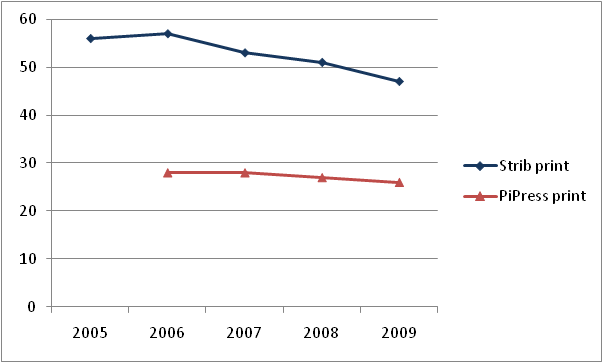 ♦ Some newspapers have legitimately cut out a lot of “third party” circulation in recent years — giveaways at sporting events, conventions, etc. once used to prop up numbers that proved useless to advertisers. So shedding some circulation can be good business.

♦ On the flip side, the PiPress has clearly had a policy of keeping market penetration up in its home counties, even if that means aggressive discounting for certain readers. That, too, is not necessarily a bad business practice; maintaining a truly critical mass in a specific area can keep ad rates up, and quieter hikes elsewhere (such as statewide single copies) can counteract the price breaks.

♦ If startribune.com and twincities.com’s penetration seems fairly modest locally, why do they always report so many unique users? Remember, Scarborough’s study is valuable because it only measures local. It doesn’t measure readers in non-metro Minnesota, the U.S. or the world. Those are also meaningful readers, cheap to acquire, and do produce a revenue stream, though not the local gusher.